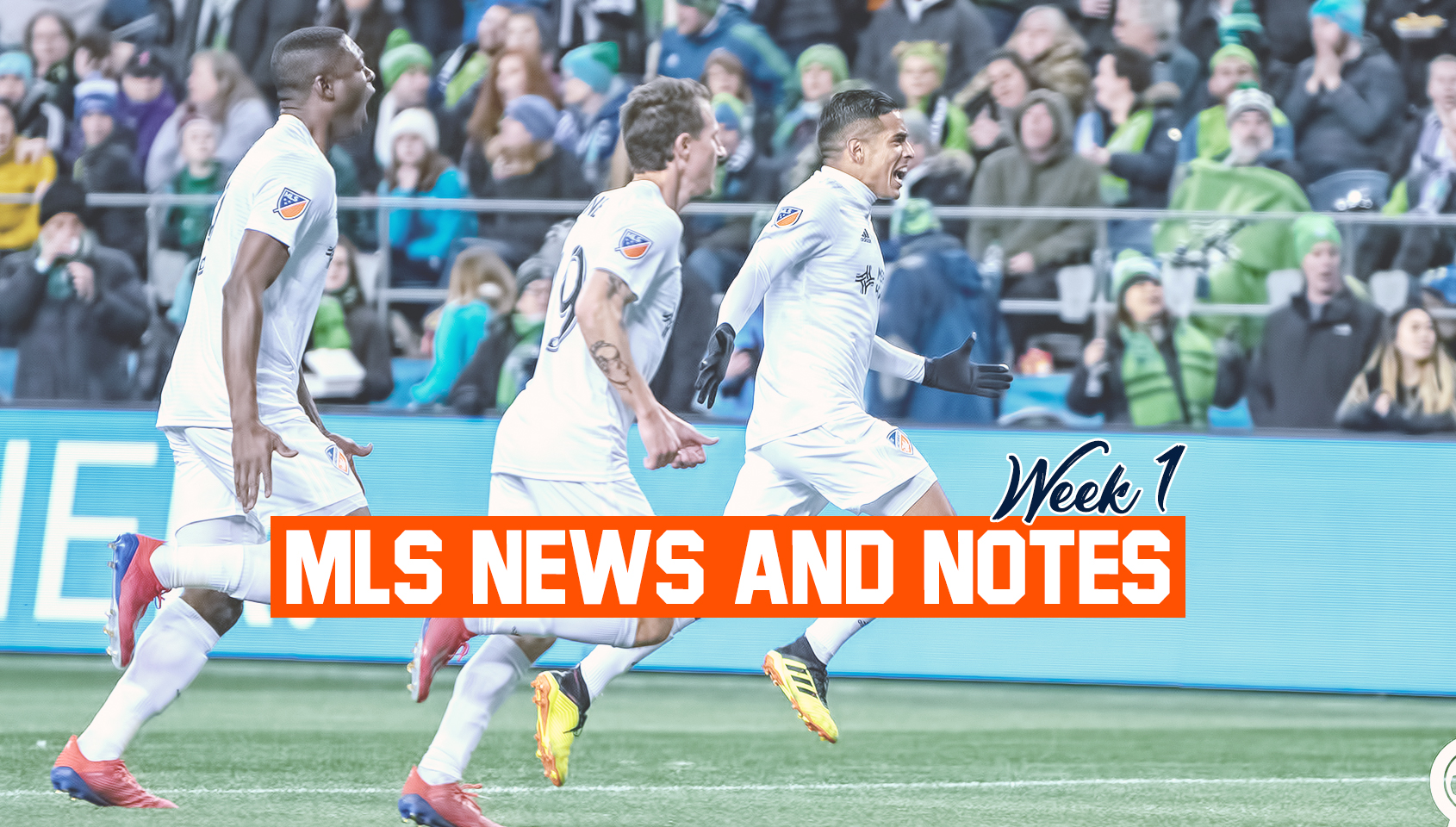 The 2019 MLS season began with a full slate of weekend games, including snow in Colorado, a statue in Los Angeles and the debut of FC Cincinnati in Seattle.

The 2019 MLS season kicked off this weekend with a full slate of matches. The first match of the season saw Toronto FC travel to Philadelphia to take on the Union. Philadelphia made a few moves this offseason to improve its roster, most notably bringing in Mexican international Marco Fabian. Fabian made his MLS debut memorable, scoring on a penalty in the 73rd minute. However, despite Fabian’s efforts, it was Michael Bradley who stole the show. Bradley scored two goals, helping Toronto escape with a 3-1 victory.

Five of the 10 matches that took place on Saturday ended in a draw. The craziest of those matches was in Colorado. The Rapids and Portland Timbers played to a 3-3 draw in front of 12,717 fans, during a heavy snowstorm. The match saw everything from red cards to own goals. The game was turned around when Rapids rookie Andre Shinyashiki snagged a point from the jaws of defeat, when he scored in the 94th minute. The Rapids played with 10 men for just over 60 minutes, so coming away with a point was a big victory.

Portuguese international Nani made his Orlando City debut in the club’s 2-2 come from behind draw with New York City FC. Nani came on in the 70th minute for his first MLS action and immediately assisted on Tesho Akindele’s 74th minute equalizer. The Columbus Crew were able to overcome conceding an early goal at home, to draw with the New York Red Bulls, in the debut of new head coach Caleb Porter. This was a solid point on the road for New York, as Bradley Wright-Phillips and Daniel Royer did not travel with the team to Columbus. On the other side, this has to be looked at as a missed opportunity for Columbus to take advantage of the shorthanded Red Bulls.

The New England Revolution left Texas feeling pretty good after its 1-1 draw against FC Dallas. The Revolution were dealt an early blow when defender Michael Mancienne picked up an injury during the pregame warmups and could not make the start. The match was relatively low-key, with not a lot of action from either side. The opposite can be said just a few miles south in Houston, where the Dynamo and Real Salt Lake played a spirited and pacey match in front of 16,827 at BBVA Compass Stadium. The match saw a total of seven yellow cards and one sending off. Referee Armando Villarreal dished out five yellow cards in the first 31 minutes of the match. It wasn’t until the 40th minute when Albert Rusnak got RSL on the board. The Dynamo, fresh of their CONCACAF Champions League victory, used their pace and solid offense to draw the match level in the 62nd minute through Mauro Manotas. Things got a little interesting when Matias Vera was sent off for his second yellow, putting the Dynamo down a man for the remaining 10-plus minutes of the match. Real Salt Lake was unable to take advantage of the sending off, and both teams move on with a point.

There were goals aplenty in Vancouver as an improved Minnesota United went into Canada and came away with an impressive 3-2 victory over the Whitecaps. Darwin Quintero had an incredible night, as he was a part of all three goals. He notched his first goal of the year from the penalty spot in the 37th minute and assisted on the next two goals by Francisco Calvo and Romario Ibarra.

On a night that saw the first statue ever dedicated for a player in MLS history, Zlatan Ibrahimovic and the LA Galaxy knocked off the visiting Chicago Fire. Before the match, the Galaxy unveiled a statue for MLS and club legend David Beckham. Ibrahimovic sent the Galaxy faithful home happy with a go-ahead goal in the 80th minute. CJ Sapong made his Fire debut memorable, with his first goal with his new club. Staying out west, the Montreal Impact spoiled the coaching debut for Matias Almeyda in San Jose. Designated Players Ignacio Piatti and Saphir Taider scored for the Impact.

FC Cincinnati made its MLS debut against the Seattle Sounders. The game recap can be found here. Defending MLS Cup champion Atlanta United was in action on the road against D.C. United. In a surprising result, Atlanta fell to D.C. United, 2-0 on a cold and rainy night. Midfielder Paul Arriola tucked one home from very close range just before the half to get things rolling for DC United. Luciano Acosta added to the misery for Atlanta with his first goal of the year in the 58th minute. The loss marked the third year in a row Atlanta lost in their season opener.

The final match of the weekend was between two MLS Cup contenders. Sporting Kansas City headed to the city of Angels to face Los Angeles FC. In a fantastic, yet physical match, LAFC struck late on a goal from substitute Adama Diomande. Sporting struck first, just 16 minutes in, from the right foot of Krisztian Nemeth. Things got interesting after the goal, as four yellow cards were dished out before the half. A total of 11 cards were handed out, with Roger Espinoza seeing his second yellow and being sent off in the 84th minute. Sporting KC was unable to hold on, and Diomande sent Banc of California Stadium into a frenzy, with a beautiful turn and shot just before the final whistle.

Michael Bradley and Jordan Morris are at the top of the scoring charts after the first week with two goals. Darwin Quintero, Nicolas Lodeiro and Victor Rodriguez each had two assists in their opening matches. The performances of these five players earned them Team of the Week honors. The team of the week can be found here.

As always, stay tuned to Cincinnati Soccer Talk for all things FC Cincinnati as it heads south to face Atlanta United in their home opener.