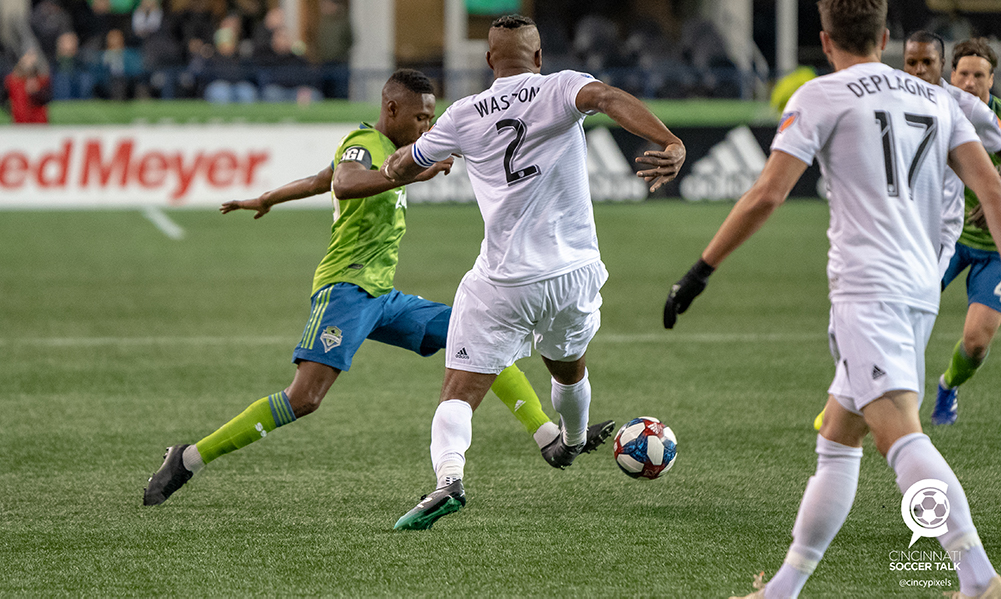 D.C. United tops the first installment of our MLS Power rankings, with FC Cincinnati bringing up the rear.

Week 1 of the 2019 MLS season entered the books last weekend with some outstanding matches and a few surprises. D.C. United thrilled a national audience with a solid 2-0 win over defending MLS champion Atlanta United, while expansion side FC Cincinnati suffered a 4-1 defeat at the Seattle Sounders.

Here is a look at our MLS Power Rankings after Week 1:

(Note: Early season rankings will fluctuate as teams settle. These rankings are in no way indicative of a final product.)

1. D.C. United (1-0-0) – Wayne Rooney served as a catalyst for D.C. United’s revival late in the 2018 season, and that resurgence continued on Saturday night. The club’s overall talent level probably puts them in position for a middling playoff spot in the Eastern Conference, but you never know if maybe this is the year D.C. United takes the next step.

2. Los Angeles FC (1-0-0) – An early season Western Conference Battle of the Titans took place with Sporting Kansas City this weekend with Los Angeles FC emerging as 2-1 victors on Sunday. The match highlighted the best of what MLS has to offer with an exciting crowd and some seriously fun soccer. Keep an eye on LAFC this season. The club may well represent the West in the MLS Cup in 2019.

3. Seattle Sounders (1-0-0) – FC Cincinnati got the first look at the 2019 Sounders, and it wasn’t pretty. The Sounders dominated most of this game and probably could have scored two or three more goals. Talent is there for a strong run this season.

4. N.Y. Red Bulls (0-1-0) – The Red Bulls remain one of the most talented teams in MLS. They engaged in a good match with fellow Eastern Conference contenders Columbus Crew SC this weekend, and they didn’t disappoint.

5. Columbus Crew (0-1-0) – Caleb Porter’s debut at the helm of Crew SC was a solid one in a 1-1 draw with New York. The Crew have the talent to compete in the Eastern Conference, and now they have the stability in the organization to succeed long-term.

6. L.A. Galaxy (1-0-0) – Improved defense and a returning Zlatan Ibrahimovic have the Galaxy in a position to earn a solid playoff seed this season.

7. Atlanta United (0-0-1) – A loss in D.C. doesn’t erase how talented this roster is. Atlanta United will get it together sooner rather than later. Expect Atlanta to move up the rankings.

10. Montreal Impact (1-0-0) – Go back and look at what Montreal did to finish the 2018 season. Its 2-1 road victory over an improved San Jose club should serve as a solid reminder that the Impact are finally ready to compete for a playoff spot.

12. Minnesota United (1-0-0) – Minnesota United earned a critical road victory to start the season in Vancouver. Word on the street has been Minnesota is better this season. It appears that word may just be true.

13. Portland Timbers (0-1-0) – The Timbers continue to field a solid playoff contender every year. However, there is reason to be concerned after giving up three goals to the Rapids last weekend.

15. Colorado Rapids (0-1-0) – Colorado appears much improved from last season, but do the Rapids have enough to compete in the deep Western Conference?

16. Houston Dynamo (0-1-0) – Houston has the talent for a playoff run, but do the Dynamo have the depth to handle their Concacaf Champions League commitments early in the season?

17. Chicago Fire (0-0-1) – The Fire gave the Galaxy all they could handle on the road. The question is whether or not the Fire have enough talent to compete this year.

18. FC Dallas (0-1-0) – Dallas is better than this ranking, but it’s going to take some time for their young talent to jell.

19. Vancouver Whitecaps (0-0-1) – The home loss to Minnesota United is a devastating way to start the season. Giving up three goals at home to one of the league’s worst teams in the last two years is going to raise several questions.

20. Real Salt Lake (0-1-0) – Lots of roster questions and an unimpressive start to the season have RSL low in the rankings.

21. Orlando City (0-1-0) – Interesting performance from Orlando City in their first match, but Orlando still has a long way to go before erasing memories from 2018.

22. San Jose Earthquakes (0-0-1) – One of the worst clubs from last season picked up right where it left off from last season. It might be another long year for San Jose.

23. Philadelphia Union (0-0-1) – Sooner or later, the Union franchise needs to bear fruit from its acclaimed academy system. An opening 3-1 home loss to Toronto is inexcusable.

24. FC Cincinnati (0-0-1) – What can I say? The FC Cincinnati back line is a mess for various reasons right now. Oh, and it doesn’t get any easier with a visit to the defending champions next weekend. Enjoy the season, FC Cincinnati fans. At least we finally get to see this club facing the best there is in the United States.