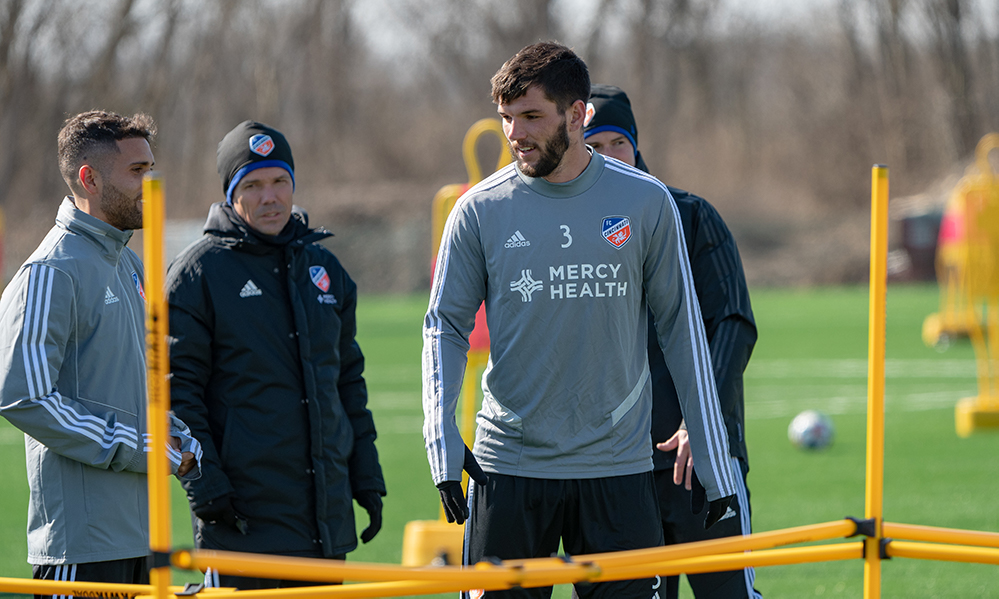 After the Carolina Challenge Cup ends on Saturday, FC Cincinnati will quickly switch gears to focus on its inaugural MLS match at Seattle on March 2.

Over the next four days, FC Cincinnati coach Alan Koch’s club will move from preseason mode to regular-season mode, while hoping to avoid panic mode. Two preseason matches remain, as do many questions, most of which Koch hopes to have answered before they hang their kits in the CenturyLink Field dressing room on March 2 in Seattle.

For now, the experimentation continues and the process is ongoing. As an expansion side that only began to pour its foundation in December, FCC doesn’t have the luxury of most other MLS clubs who for the most part will set their roster and philosophy well ahead of the season-opening match.

After Saturday’s finale of the Carolina Challenge Cup in Charleston, S.C., FCC shifts its attention to the Sounders and a much-anticipated inaugural MLS season. There’s no turning back now.

“After the game on Saturday is when the season begins,” Koch said, via conference call with reporters on Tuesday. “Then it’s about recovering from Saturday and getting ready for Seattle. Then the one-match-at-a-time philosophy really kicks in.”

Injuries haven’t helped expedite the preseason project. Several players were unavailable for Saturday’s 2-1 win over the Charleston Battery in the Carolina Challenge Cup. That situation is improving, but defenders Kendall Waston and Greg Garza aren’t likely to play Wednesday against the Chicago Fire, although Waston is back at training and could return for Saturday’s Cup finale against the Columbus Crew.

“It’s been a source of frustration for them and for us,” said Koch of the injuries. “Our medical staff has done a fantastic job. Kendall has been in and out of training sessions. Provided that he got through (Tuesday) and he’s 100 percent off that, we’ll incorporate him into training sessions over the next few days and hopefully get him some minutes on Saturday. Greg’s pushing along, but he’s probably a few more days behind.”

Koch doesn’t expect Kekuta Manneh to see minutes in this week’s matches. Newly-acquired from the Crew, the attacking forward is dealing with a minor ankle injury. It is not considered serious, and Koch said Manneh is incorporating himself well into the squad.

“He’s making a lot of progress,” Koch said. “Probably doubtful for Saturday. He’s acclimating with the group fantastically like I knew he would.”

As for the experimentation, Koch expects that to continue Wednesday against the Fire. On Saturday, FCC went with a 3-4-3 formation with mixed results. At times, FCC was the more threatening club, while for other periods it appeared disjointed, against a USL side whose roster is far from set.

It’s only preseason and more stern tests will come this week against MLS sides, but FCC has produced seven goals in five matches and arguably could have had more. While injuries have slowed progress on the defensive side of the pitch which is the club’s assumed strength, the club has showed pace and promise in the attack. Koch lauded his midfield in particular on Tuesday.

“We’ve got some players there that are proven in the league and proven themselves in other leagues,” he said. “In whatever formation we use, they have to all be on the same page. We have some very quick players up front. In those transitionary moments to get forward as soon as possible, we can bypass the midfield. There are other times we can get players on the ball, and there are players who are very technical and comfortable on the ball, like (Leonardo) Bertone and (Victor) Ulloa.”

This week in Charleston, FCC will face established MLS sides Columbus and Chicago, who it’s fair to assume are farther along in their development at this stage of the preseason. And while the Crew and Fire are soon to be Eastern Conference rivals, Koch said scouting for the regular season will be kept at a minimum. For now, FCC is concerned more about itself.

“We’re focused on tomorrow and focused on ourselves,” Koch said. “You can see the bonding with the team in a short amount of time. We’re the new kids. We start from the bottom. We need to maximize our time together. We need to be willing to fight tooth and nail to work our way up.”