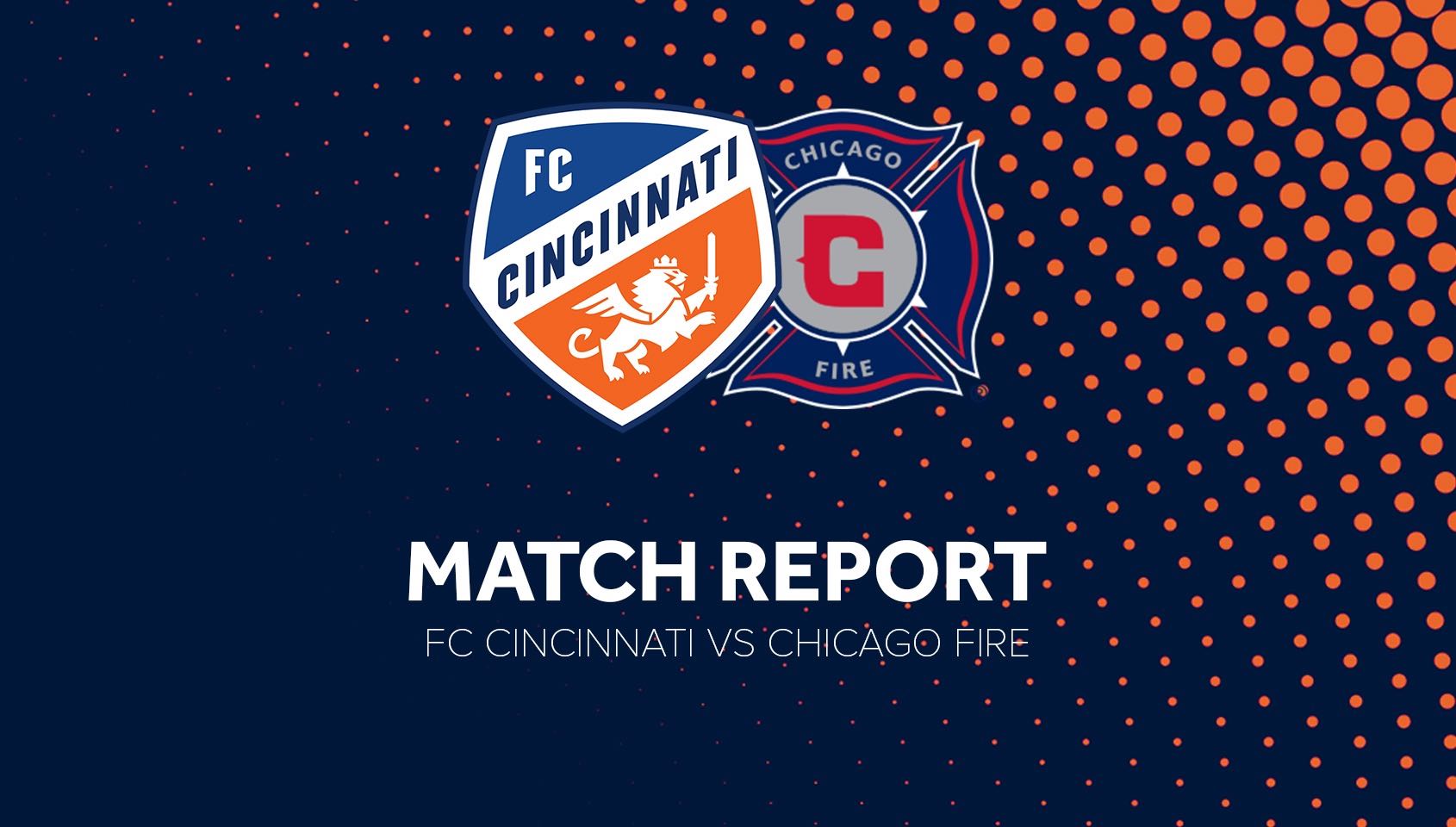 FC Cincinnati took on its first MLS opponent in the Carolina Challenge Cup, facing the Chicago Fire on Wednesday for the first time since the thrilling U.S. Open Cup Round of 16 match at Nippert Stadium in 2017. The match against Chicago resulted in a 1-1 draw, with goals from Chicago’s Alexander Katai in the 52nd minute and FC Cincinnati’s Roland Lamah in the 84th minute.

After defeating the Charleston Battery 2-1 on Saturday, FC Cincinnati was looking to keep the momentum going in its second match of the Carolina Challenge Cup. Unlike Saturday however, FC Cincinnati struggled out of the gate, with the Fire controlling possession in their attacking third for the first 20 minutes of the match. Spencer Richey had to bail the Orange and Blue out a couple of times early on, coming off his line in the seventh minute to make a nice sliding save, and then made a diving save on a header inside the box in the 11th minute.

Richey continued to make saves in the first half of the match, recording an excellent double save in the 38th minute. With FC Cincinnati struggling to have possession, a great first half by Richey kept FC Cincinnati in the match when it very easily could have been 2-0 Fire after the first 45 minutes.

The second half started out with more of the same from the first half, with FC Cincinnati struggling to string passes together. The squad often looked disorganized. In the 52nd minute, it finally caught up to FCC as Katai softly lobbed a shot over Richey to give the Fire a 1-0 advantage.

Even after allowing a goal, FC Cincinnati still seemed unable to find itself on the pitch and appeared to be stuck in situations of only clearances and defense. The Fire quickly came back on the attack, firing several more shots at goal, forcing Richey to make even more saves, including a spectacular one in the 60th minute, his eighth save of the match.

After mass substitutions in the 70th minute, FCC showed life, having more power and playing more in its attacking third. It was clear that the group that finished out the game showed more skill, as it tried to find the goal that would give it at least one point in this match, and this was no more evident when Lamah ripped an absolute screamer past a diving keeper to give FC Cincinnati the equalizer that it was desperately looking for. In the 89th minute, Eric Alexander tried to put one home to give FC Cincinnati the Carolina Challenge Cup, but the save was made by David Ousted.

Even with all struggles that FC Cincinnati had in the first 70 minutes, the club still found a way to manage a 1-1 draw.

1) While the rain that came down throughout the course of the Charleston Battery-Columbus Crew match mostly stayed away, it still had a major impact on the game. The rain made the natural grass playing surface slick, causing several players from both squads to slip and slide from time to time, making it harder for both teams to control the ball and make proper passes. Also, since the playing surface was grass rather than turf, the game moved at a slower pace due to the wet pitch. One would have to imagine that this match would have been played differently by both sides under ideal weather conditions.

2) Forrest Lasso continued to look cool, calm, and composed in the tuneup, continuing to build off of his previous performances so far this preseason. Lasso acted as the bright spot defensively for FC Cincinnati by winning multiple headers inside the box and clearing a ball off the line in the 30th minute to save a goal. While it might not be enough to crack the starting 11 for FC Cincinnati’s first MLS regular season contest against the Seattle Sounders on March 2, the 2018 USL Defender of the Year should provide some healthy competition at centerback for this upcoming season.

3) Richey rebounded very well and was by far FC Cincinnati’s best player during the match. Even though it is likely that Przemysław Tytoń will begin the season as the club’s starting goalkeeper, don’t be surprised if Richey establishes himself as a creditable threat at that position. Remember that at the start of the 2018 USL Season, Evan Newton was the starting goalkeeper, but Richey ended up starting in the net for a majority of games down the stretch, including both USL playoff games. At the very least, FC Cincinnati fans should feel a little more comfortable with Richey as the No. 2 goalie for the upcoming MLS season.

NEXT UP
vs. Columbus Crew in CCC, 5 p.m. Saturday, Charleston, S.C.