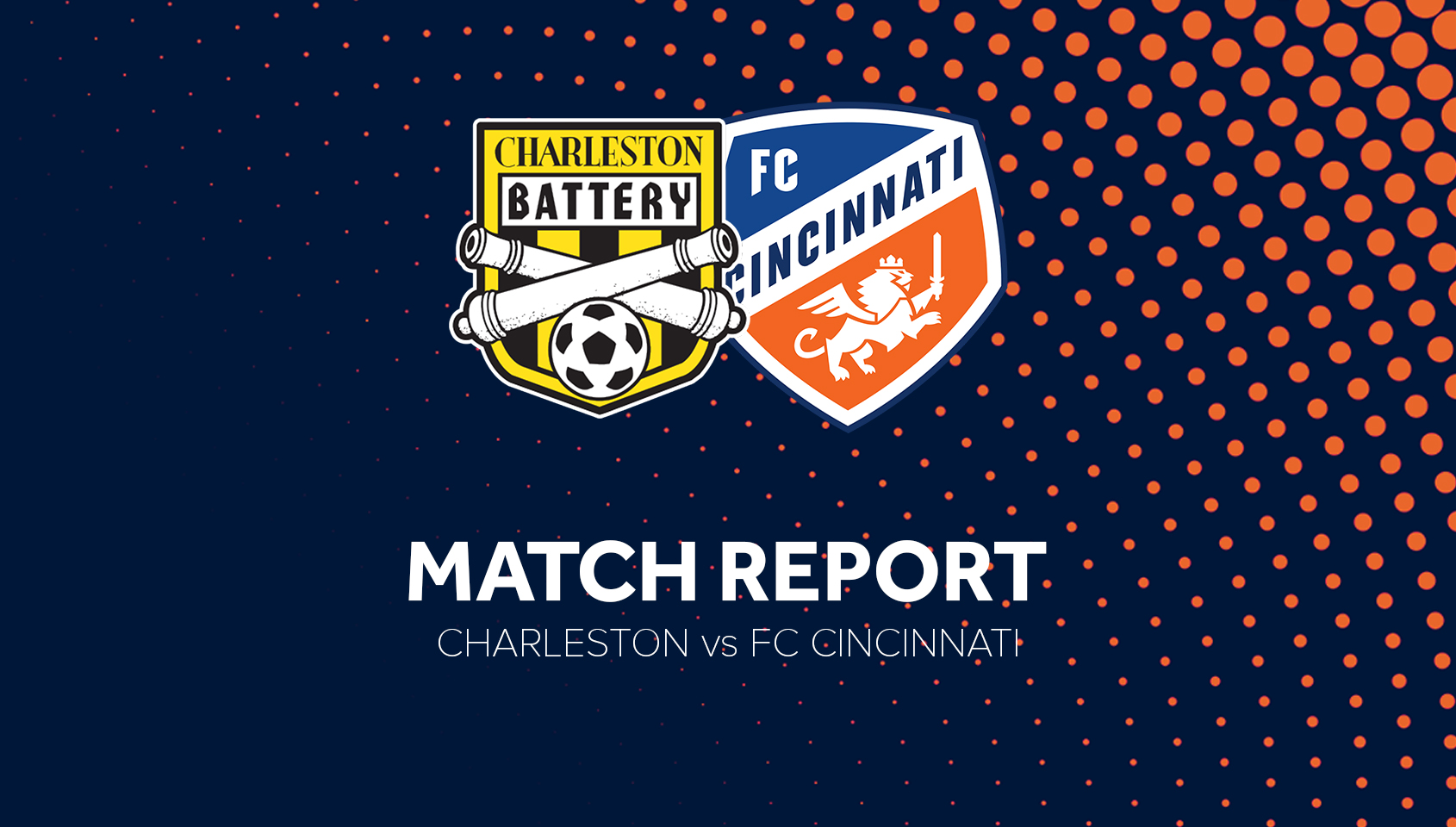 Gone are the training sessions at the IMG Academy. The preseason has shifted from Florida to South Carolina, as FC Cincinnati takes part in the Carolina Challenge Cup for three preseason matches. FC Cincinnati kicked off its CCC play with a 2-1 victory Saturday over former USL rival Charleston Battery at MUSC Health Stadium in Charleston, S.C.

After suffering defeat for the first time this preseason on Tuesday, the club was anxious to get the bad taste out of its mouth. It took very little time for Fanendo Adi, who was wearing the captain’s armband, to get FCC on the board with a goal in second minute. The goal was the result of great buildup from Alvas Powell and Darren Mattocks. Powell fed the ball to Mattocks on the right side, who then crossed the ball to the middle to Adi. Adi hit it first time, but the shot was saved. Adi sent the rebound home to give the Orange and Blue the early lead. That was the third goal from a forward so far this preseason.

Once again, FC Cincinnati seemed content to play on the counter, giving Charleston plenty of possession. After falling behind minutes in, Charleston applied pressure but nothing came of it. Aside from a few missed chances, this was a very low key first half.

The second half saw a mass substitution for both teams, which has been customary all preseason. Charleston nearly equalized a minute into the second half, but the shot went high after a poor turnover at the back. The Battery were awarded a penalty in the 54th minute after the official determined defender Nick Hagglund handled the ball in the box. Charleston forward Ian Svantesson converted the penalty, leveling the match.

“I think we had some very good moments. I think we showed that when we are calm in possession, when we take care of the ball, that we can be a very, very good team,” coach Alan Koch said in a team media release. “I also think we had some good transitioning moments going to the goal. I felt like we created quite a few chances. I think out of possession we are disconnected at times. So yeah, good moments and then some tough moments, too.”

These clubs are certainly familiar with each other, so this performance could be a solid building block as they head towards their next preseason match.

FC Cincinnati continued to control play for the remainder of the match, not allowing Charleston to get anything going or gain any sort of momentum. So far in these five matches this preseason, the FC Cincinnati defense has done a good job of limiting any opposition chances late in matches. The Carolina Challenge Cup continues for FC Cincinnati this week with matches against the Chicago Fire on Wednesday and a Hell is Real Derby against Columbus on Saturday. All matches of the Carolina Challenge Cup are streamed online, so you can follow all of the game action via the Charleston Battery website.

The scoring this preseason has been coming from all facets. The defense has scored two goals, both from Forrest Lasso. The midfield has chipped in with a goal, and the forwards have added four goals so far this preseason. The goals being scored by the different groups will be big during the regular season.

“We’ve got defenders, and for us set pieces are going to be very vital in games for us when we go into the league,” Adi said in the team release. “So to see the defenders are scoring, wingers and strikers scoring, is very important for the entire team. The whole team is not just depending on one guy just to score a goal, but anybody can step up and get a goal so it is important for the team.”

Lack of consistency could really cause a problem moving forward. There are only two preseason matches left before this club heads west to take on the Seattle Sounders to open the season. So far this preseason, we have not seen a consistent set of lineups. The lack of familiarity of playing with each other could turn into a much bigger issue as the season starts. As the preseason dwindles, so does the time for getting used to each other.

The pressure is certainly on Adi and his play for this season. The hype was there last season when he joined the club as the first designated player, but some felt his play on the field did not live up to that hype. Even without a goal before Saturday, Adi had played pretty well but put in his strongest performance this preseason. For FC Cincinnati to have any success in their first MLS season, Adi is going to be the most important player in helping deliver that success.