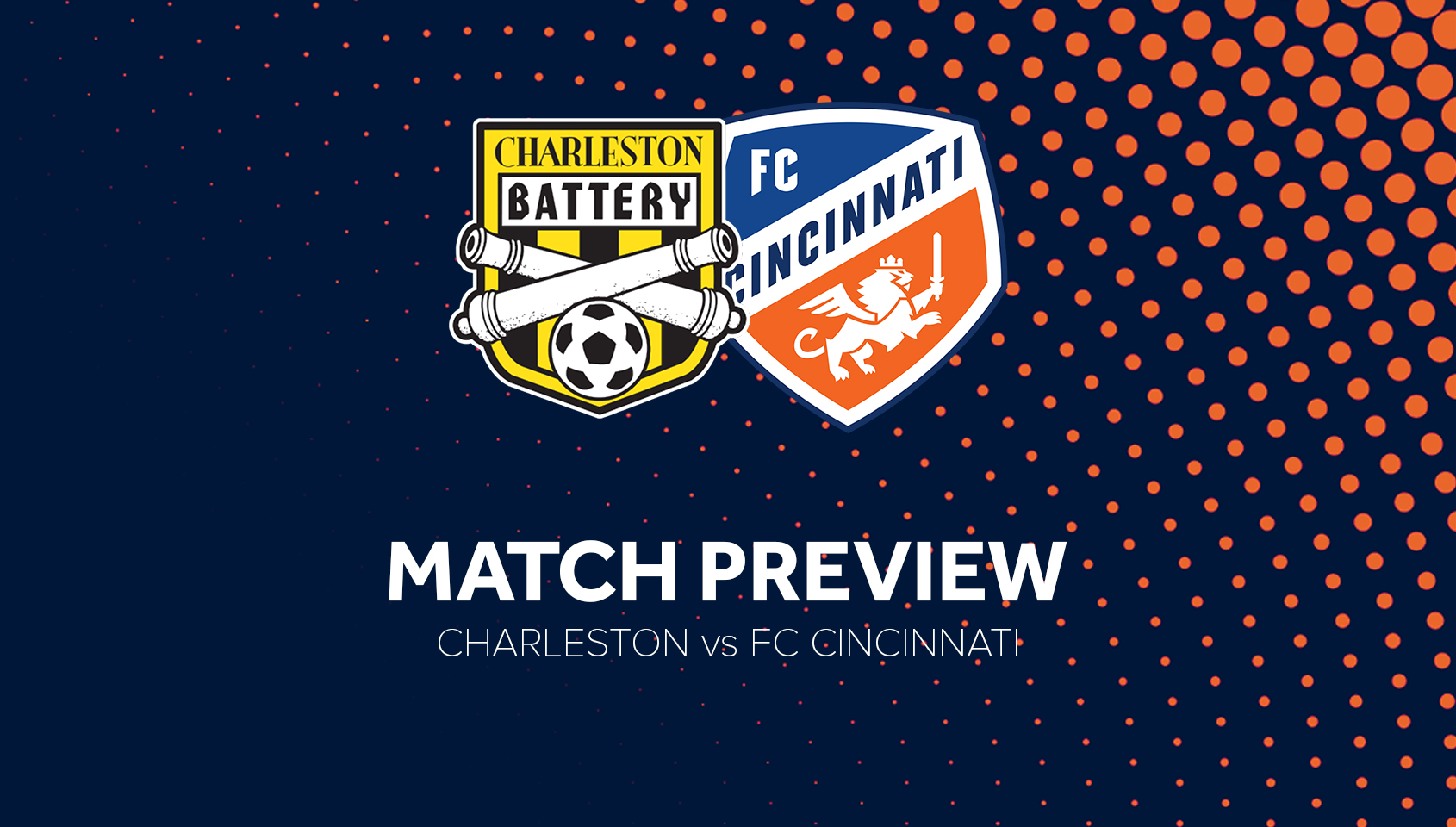 FC Cincinnati faces off against former USL rival Charleston Battery in the first match of the Charleston Challenge Cup. The match will take place Saturday night and will be streamed online.

FC Cincinnati continues its set of preseason tests when it travels to Charleston to play in the Carolina Challenge Cup. First up, they face an old rival, Charleston Battery. The match will take place on Saturday night at 7:30 pm.

Charleston was one of the USL teams which seemed to stifle FC Cincinnati. In the 2016 and 2017 seasons, FCC wasn’t able to pick up a win against them, including a loss in the 2016 USL Playoffs. Like everything, 2018 bucked that trend and FCC went undefeated against the Carolina side, including getting clean sheets in both matches that season.

Another aspect of note is that Charleston Battery was Forrest Lasso’s team prior to joining FC Cincinnati. Lasso spent three seasons in Charleston, scoring 10 goals in that time, before leaving his hometown team.

FC Cincinnati makes its way to Charleston after playing four prior preseason matches. Three of those were against other MLS teams-the Montreal Impact, Colorado Rapids and D.C. United. In all three of those matches, FCC was able to get at least a draw. They drew Montreal and D.C. and beat Colorado to get their first MLS victory, even though it’s only preseason.

The wheel seemed to fall off the defensive bus when they played Indy Eleven on Tuesday however. FCC allowed three goals to the USL squad, while only scoring two, giving the team its first loss of the preseason. FC Cincinnati didn’t look quite right defensively in the Indy Eleven match, but they did roll out a couple of different groups of players. This may have led to lower communication and chemistry. Notably, Koch played a couple of players out of their normal positions.

In the Indy Eleven match, on the offensive side, Darren Mattocks scored his second goal of the preseason, which gives him the team lead. Forrest Lasso, Nazmi Albadawi and Nick Hagglund have scored the remaining three while Fanendo Adi is still without a goal.

One of the preseason headlines is the quality of the USL players. Lasso has two assists, Corben Bone has another and Ledesma has consistently been helping on set pieces and corners. This bodes well for the dog days of the MLS season when it feels like every team is hurting for depth. Having a group of players on the bench that want to contribute will help the team greatly down the stretch.

With all of that said, FC Cincinnati only has three more preseason matches left before the MLS opener against Seattle Sounders March 2nd. Alan Koch and the coaching staff should already have a reasonable idea of the majority of the players they want to be in the starting eleven on opening night. But, right now, it doesn’t look like they do. Koch has three matches left to figure out the plan. Charleston should be used as a place to gain minutes for the starters that need it. FC Cincinnati will be heading into the season with a chemistry disadvantage.

Unlike the past few years, FCC will not be able to get points on the table thanks to talent alone. In their first 10 matches this season, nine are against 2018 MLS Playoff squads, which is a rough start. So, the team will need a plan to rally the talent it does have together. Look for FC Cincinnati to try and start working with the squad they might actually bring out Match One.

In terms of Charleston, the Battery was fourth on the Eastern Conference table last season, finishing with 56 points (14-14-6) and a goal differential of +13.

The Battery boasted one of the top scorers in the USL in forward Ataullah Guerra, who tallied 15 goals and 5 assists. That accounts for just under a third of the total Battery goals; they scored 47 goals last season. Guerra returns for them this season and he looks to have another outstanding season.

The team’s two other leading scorers, Gordon Wild and Patrick Okonkwo both left the team to return to Atlanta United. Wild and Okonkwo had  7 and 5 goals respectively. Wild was the no. 37 pick in the 2018 MLS SuperDraft by Atlanta and was on loan to the Battery for the 2018 season. Okonkwo was signed as a Homegrown player by Atlanta United in the 2017 season and was also on loan. With both players gone, Charleston lost massive parts of its attack.

FC Cincinnati is on the final road of its preseason journey and it shouldn’t let off the brakes now. Getting on a hot streak now may well lead to some positive results when the regular season starts. And hey, maybe this tournament will end with FCC’s first trophy as an MLS team. Also, good news, the match will be streamed on CharlestonBattery.com.

Stay tuned to Cincinnati Soccer Talk for recaps on the upcoming matches as well as news too!