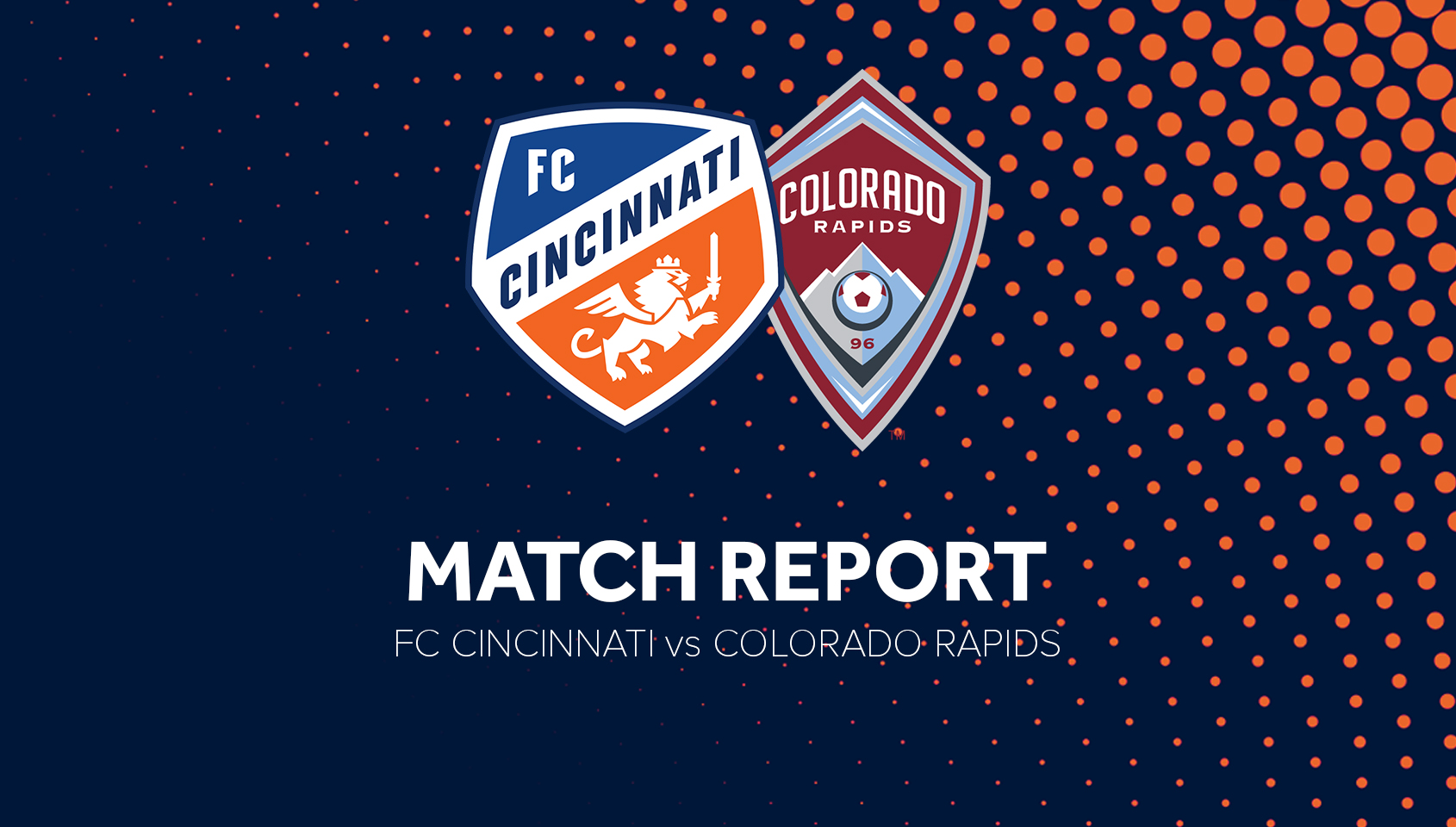 The 2019 preseason is in full swing and FC Cincinnati has now notched their first preseason victory, 1-0 over the Colorado Rapids Saturday at the IMG Academy in Bradenton, Fla. In a rare morning match, FC Cincinnati kept up the momentum from the last match against Montreal.

The Rapids got the match started and had more of the attacking pressure early. On the other side, FC Cincinnati played a solid match defensively, handling an early center feed by the Rapids in front of an open FCC net. There was no damage done, as Cincinnati native and new acquisition Nick Hagglund cleared the ball away. The Rapids had a corner just after that, which was once again cleared away by FCC. Any bit of pressure the Rapids gave to FCC, it was handled very well.

Just like the last match against Montreal, FCC settled down and took control of the game after a good spell of pressure from the Rapids. The first 10 minutes of this match was a lot better from the club. The defense kept things tight and organized. In the 13th minute, Fanendo Adi took advantage of a Rapids turnover, ripping a shot was that was easily handled by Rapids keeper Tim Howard. Just a minute later, Howard was called into action, pushing away a beautiful curling free kick from Emmanuel Ledesma.

Things got a little sideways for FCC 21 minutes in, when Kendall Waston, who was wearing the captain’s armband, was sent off for a crunching tackle just outside of the box. That was the first red card for either club this preseason. The ensuing Rapids freekick, from Benny Feilhaber, was thumped off the post to the right of Przemysław Tytoń. FC Cincinnati played a man down for nine minutes until Hassan Ndam came on to replace Waston. Just a few minutes later, Diego Rubio had a chance to give Colorado the lead but fired a shot wide of the net. Neither club troubled the other for the remainder of the first half.

“We break it down into two 45 minutes,” FC Cincinnati coach Alan Koch said in an club media release. “I like the fact the first group dealt with some adversity. Obviously having a man sent off and having to play a man down in preseason and in this warm weather is not easy for those few minutes, so the guys dealt with that very, very well. I was also impressed with the shape of both groups. When you focus on a lot of the defensive work this week, I think that’s a huge positive.”

The second half was once again positive for FCC. It only took 14 minutes for the deadlock to be broken. Nazmi Albadawi sent a ball in from the corner, which was then headed across the box by Ndam. Forrest Lasso was there to get his head on it, depositing it into the back of the net, giving FCC a 1-0 lead.

The rest of the match saw very little from the Rapids and a few chances from FCC. The defense once again played well, keeping the Rapids at bay. FC Cincinnati played another good match, facing a club who was making their preseason debut.

FC Cincinnati defenders had some good things to say regarding the team’s performance.

“It was good,” Powell said in the release. “A lot of energy from the boys. I think the team is getting comfortable with each other every day.”

Even though they have scored in both preseason matches thus far, the offense does need to get into rhythm.

The game did see the first minutes for a few of the draft picks, which is crucial moving forward.

“To get lots of the draft picks out there was huge. It was awesome and I thought they all did well,” Koch said in the release. “The guys that played longer minutes had a couple tough challenges, but you expect them to have tough challenges. It’s how they respond to those challenges, which was a big positive.”

The biggest of those was the debut of the top pick overall, Frankie Amaya.

The Colorado Rapids struggled mightily last season, finishing second to last in the Western Conference, with only 31 points. The Rapids added a few solid players this offseason, and they saw action today. Having FCC keep a club like that scoreless in the preseason can only help this team continue to build moving towards the regular season.

The draft picks saw their first action in 2019. With an abundance of games left in preseason, it was crucial for the young guys to get some minutes. The club continues to gel, and having the young guys in the fold, getting minutes can only help. With Allan Cruz gone on national team duty and a few others held out with some injury concerns, this was the perfect time to get those guys involved.

Forrest Lasso continues to impress. The 2018 USL Defender of the Year has been nothing short of solid in his two appearances in the preseason. While FCC got roasted for bringing so many USL players to MLS, Lasso was one who was a no-doubter. Lasso has seen his name on the scoresheet in both matches so far. Last match, it was his perfect long ball that found Darren Mattocks for the goal and today, he was the one who scored the only goal in the match. I know it is only two matches in, but Lasso has made a solid case for playing time.