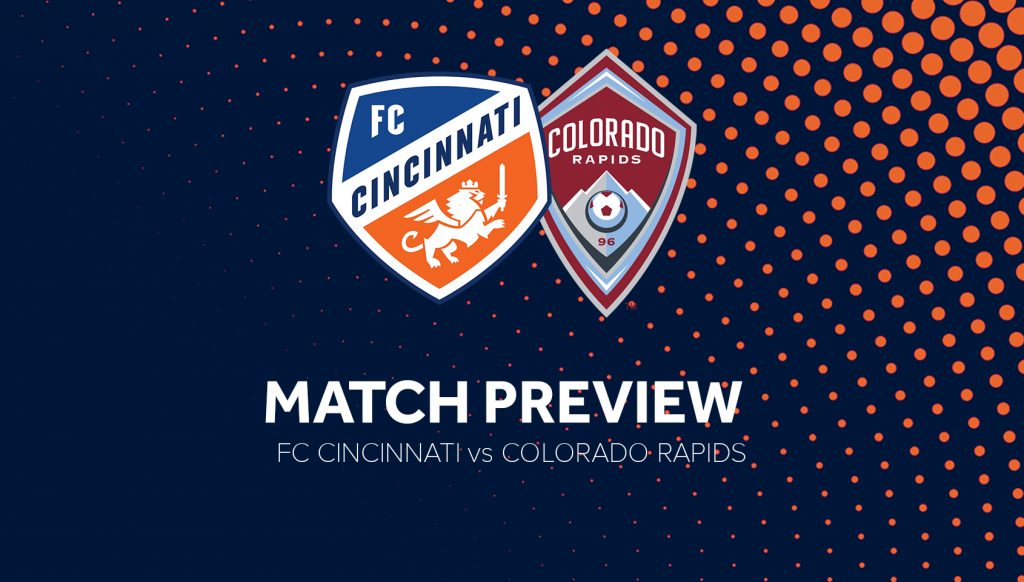 The first preseason match for FC Cincinnati was a successful outing, going up against a potential playoff squad in Montreal Impact, but the preseason doesn’t end there. It continues when the Orange and Blue go up against Colorado Rapids at 10:30 a.m. Saturday at the IMG Academy in Bradenton, Fla. Like the match against the Montreal Impact, this match will not be streamed, so fans will need to pay attention to Twitter to see how the match plays out.

FC Cincinnati, in its match on Wednesday, defended well considering the team had never played together in a real match. The chemistry will continue to be the most important part of playing the preseason matches. The results really don’t matter, but the way the players compete with each other does. Chemistry is key, and with an expansion team, that is magnified due to there not being an established club culture yet.

In both halves, the club brought out two separate teams, excluding goalkeeper Przemyslaw Tyton, who stayed in the match for the full 90 minutes, and the team seemed to play well in both. The first half, which consisted of Blake Smith, Kendall Waston, Nick Hagglund and Mathieu Deplagne, gave up more chances according to reports, but that also shows their ability to make sure the ball doesn’t get into the back of the net.

The team seemed to be able to get its offense together as well, which bodes well for the team bringing something on that front because that part of the squad was what we worried about. The second half was where the goal happened, but the first-half team also created chances, so it will be interesting to see if coach Alan Koch keeps the two teams together, or if the squads are changed up to get the chemistry with different players. Getting a different group on both sides of the ball could be something that happens, but we’ll have to wait and see.

In the first match against Montreal, I was hoping FC Cincinnati would feature their draft picks, including the No. 1 pick Frankie Amaya, but it didn’t seem that was the plan, as none of them appeared in the match. This was quite disappointing, and I hope that is changed in the match Saturday, as some of them, Amaya especially, could see the pitch in the upcoming season. This next match might be the time to get some of the younger players some time on the pitch.

The team also featured a 4-3-3 in the match against Montreal, so if Koch continues that Saturday, then that might be the formation the club works with this season. Another formation that Koch might bring in for the match is a 3-5-2. The amount of center backs the club has gives credence to a possible three-man back line.

FC Cincinnati’s opponent is Colorado Rapids, a squad who did not have a good 2018 season. They finished at the bottom of the Western Conference, 11th out of a possible 12. The Rapids tallied 31 points (eight wins, 19 losses and seven draws) on the season. The weakest part of the Rapids is their attack, scoring the lowest amount of goals in the Western Conference, with only 36 goals in their 34 matches. Their defensive efforts weren’t much better, allowing 63 goals on the season.

They may not look formidable now, but the Rapids had quite the offseason. FC Cincinnati fans may remember the Rapids because they were the club FCC traded forward Kei Kamara to in the MLS Expansion Draft. Kamara is proven scorer and will help them get the ball in the back of the net more often. Kamara has the sixth-most goals in MLS history with 112, so he has a proven pedigree. They also scooped up former Los Angeles FC midfielder Benny Feilhaber, who will definitely help the club link between the defense and attack. Lastly, they traded for former Philadelphia Union defender Keegan Rosenberry to shore up their back line.

All of this, along with Kellyn Acosta remaining with the squad after they declined an offer from an English Championship League club, shows the team is ready to win now.

I also cannot forget to mention that Tim Howard has said that the upcoming season with the Rapids will be his last. At 39, Howard has lost a step or two, but he’s still a good goalkeeper, and in his last season he will most certainly leave on a high note.