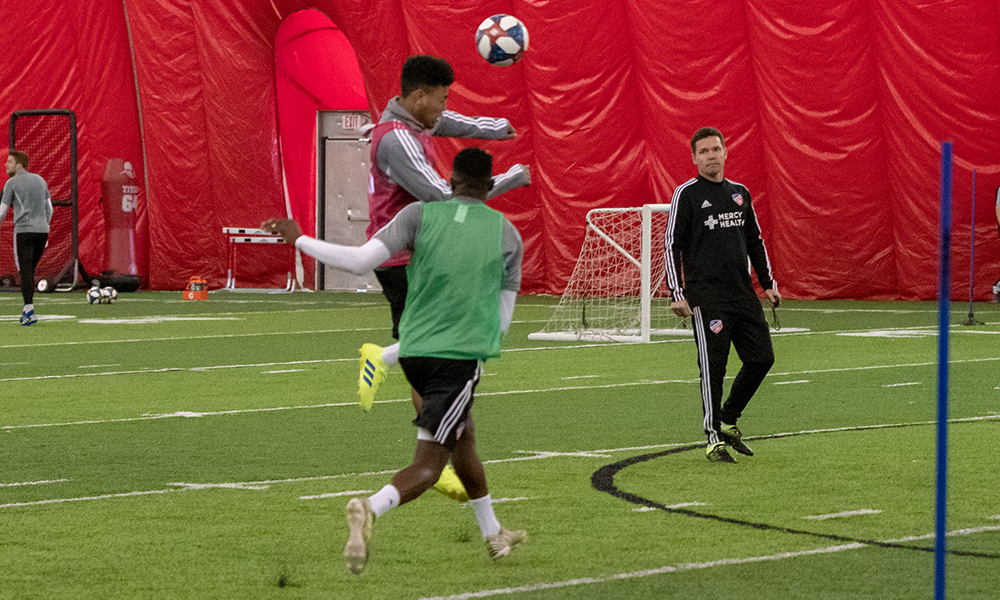 The introductions are over for FC Cincinnati after the first week of training in Bradenton, Fla. Thursday’s friendly against DC United will be a good gauge for the Orange and Blue.

The orientation phase for FC Cincinnati is over.

The expansion club spent the first week of training in Cincinnati getting to know each other and developing relationships both on and off the pitch. The first week of work at IMG Academy in Bradenton, Fla., was a continuation of that phase which included experimenting with different formations during preseason matches against Montreal and Colorado.

This week will be different. With less than a month before the inaugural season opener at Seattle, things are getting real in Manatee County.

“This really is the start of the preparation phase to get us ready for the season,” coach Alan Koch said during a conference call with reporters on Monday.

All in all, Koch was pleased with how the first week in Florida transpired. FC Cincinnati managed a 1-1 draw against the Impact and a 1-0 victory over the Rapids. On Thursday, FCC will edge a bit closer to reality when it faces DC United, a club with largely a returning roster that should provide a stern test.

“Against Montreal, I think they were the better team,” Koch said. “We struggled in that game but we got through it. On Saturday (vs. Colorado), I think we were slightly the better team and we showed substantial growth as a group. Hopefully get through a good exercise against DC. They should be further ahead in their preparations than we are.”

FC Cincinnati should be bolstered by the arrival of midfielder Allan Cruz, fresh off his stint with the Costa Rican national team. Cruz started Saturday’s 2-0 international friendly defeat to the United States and then flew to Bradenton late Sunday night.

“I was quite happy with how Allan did,” Koch said. “I watched the first 45 minutes. I was worried that he got whacked a couple times. I told him to sleep in (Monday) morning and take it easy. I’m going to catch up with him this afternoon.

FC Cincinnati also could welcome back goalkeeper Spencer Richey, who is expected to return from injury this week. With Richey sidelined, Polish international Przemyslaw Tyton has been impressive so far this preseason.

“He’s a big-time goalkeeper,” Koch said. “He hasn’t played in a long time, but he’s willing to come in and do the extra work. That’s why we chose to play him a lot the first two games. He’s shown substantial growth already. He definitely needs more games.”

Richey’s absence also has given Koch and goalkeeper coach Jack Stern a chance to see youngster Jimmy Hague, who helped close out a clean sheet against Colorado.

“It’s not easy for a rookie to come straight out of college and play in that game,” Koch said. “But he managed the rest of that game.”
It will be interesting to see how much experimentation there is this week. In the first two matches, FC Cincinnati used four at the back and three at the back at times. Koch said he was pleased with how the players approached both formations.

The key this week, Koch said, is to stay healthy and see continued growth. To that end, FC Cincinnati got a scare on Monday when Darren Mattocks was helped off the pitch with an injury. Pat Brennan of the Cincinnati Enquirer tweeted it did not appear to be serious but it could keep the Jamaican out of training for a couple days.

“We want to get through the next few days and stay healthy,” Koch said. “We are happy with how last week went, but we want to see further improvement.”