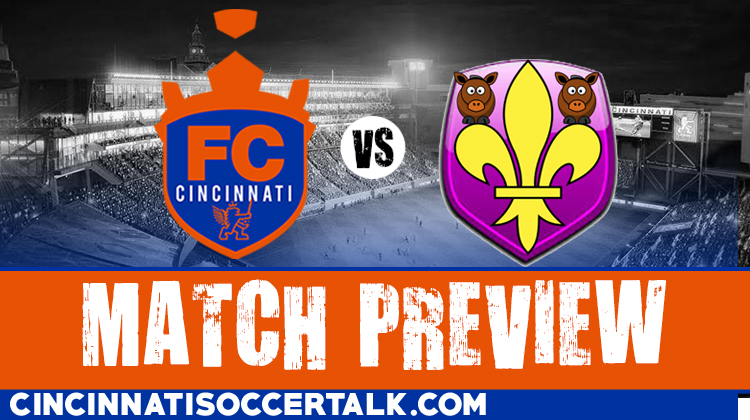 Lewisville City (2-1-0) somehow have 6 points and by virtue of a complete fluke sit 4th in the Eastern Conference. No modern science can explain this.

The club was formed when a minor league baseball team found itself with surplus players due the fact that its management was not so good at “countin'”. Those players eventually started kicking a baseball around the outfield to ward off boredom and the franchise was born.

Lewisville will set up in its traditional 1-1-1-1-1-1-1-1-1-1 formation. Coach O’Reilly likes to set the team up in a straight line and alternate between chorus-line style kicking and wriggling like a snake. “The contrast in tactics disorients our opponents, and then when they are at their weakest, we strike. I feel like we are on the cutting edge of baseball…I mean soccer, tactics.”

This year’s Lewisville team has lost some key players but they still have plenty of talent that can cause FC Cincinnati problems.

It’s true that first baseman Sandersinho is a little long in the tooth but everyone knows he’s still got goals in him. Fueled by mashed potatoes and peanut oil, he can be a slippery customer to deal with. In an interview this week he said that beating FC Cincinnati is one of the last things on his “bucket” list before he retires.

Dutch born catcher Ruud Mullet serves as a classic midfield enforcer. His tough tackling style on the field is as identifiable as his signature “business in the front, party in the back” hairstyle. When asked about compatriot Nigel de Jong’s recent bad tackle and 10 game suspension he commented. “Playing football is like hunting wild game back in Holland. When you come across a roe deer you can’t be intimidated or back down. You look it right in the eye, ….. that’s where the game is won. Besides, Nigel’s gonna Nigel.”

Both players commented that it will be disappointing not to play on a baseball field this week.

This game marks the first match in the two leg River Cities Cup Challenge. The winner over the course of two matches will be able to claim that it is the best river city. Recently, Lewisville City’s PR director Danielle Boone was asked “Which town is the best river city?” Ms. Boone responded convincingly. “Clearly, Lewisville is the best river city. We are downstream from Cincinnati so clearly all the richest minerals from Cincinnati and every upstream town come floating our way. It can produce some interesting smells but the Department of Health is looking into that and I’m sure it will be resolved soon.”

What to Expect From FC Cincinnati

FC Cincinnati is riding the high of a second consecutive victory and an impressive debut in front of their home fans. Expect them to come out of the gates fast with a lot of energy and confidence. They can expect a stern test from a team with all of the horses in Kentucky on their side. Lewisville fans are expected to come up to see the game in herds. Special accommodations are being made in section 107 where the Lewisville city supporters will sit. There will be troughs, bales of hay and special wide access restrooms to ensure the visiting guests are comfortable during the match.

FC Cincinnati should be able to exploit the wide areas of Lewisville’s 1-1-1-1-1-1-1-1-1-1 formation. Expect McLaughlin, Wiedeman and the full backs to be heavily involved in the attack and produce at least 2 goals. Taller FC Cincinnati players will have to be especially cautious of the high kicks associated with Lewisville’s chorus line tactics. But FCC’s younger faster back line should be able to shut down the aging Sandersinho. Rumor has it that John Harkes has also registered as a player/coach and could come off the bench if the game is tight. That shouldn’t be necessary though. Look for a 4-0 FC Cincinnati win, and a finger lickin’ good time at Nippert on Saturday.