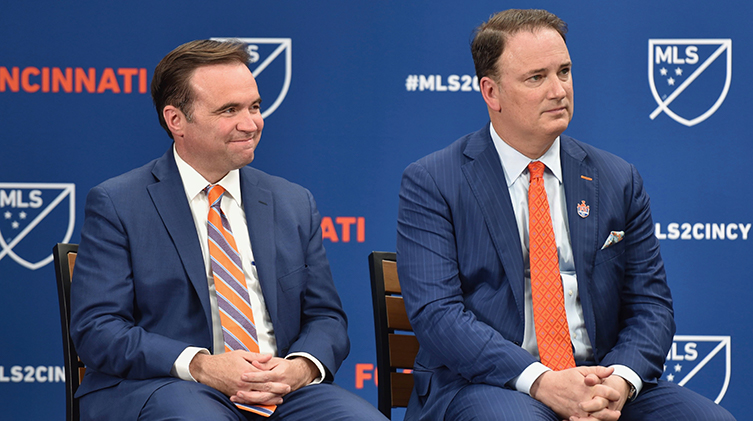 FC Cincinnati’s prior success does not necessarily translate into immediate MLS success, and it is important fans keep that in mind when watching the team next season.

FC Cincinnati will finally start what it set out to do when they begin MLS play in the upcoming 2019 season. In its three seasons in the USL, FCC placed third, sixth and first in each of those seasons respectively. Also, in its worst season, it had the storied U.S. Open Cup run, which put the team on the national stage. It has been a monumental success, with the attendance records and its first trophy in the 2018 USL season. The problem this brings, however, is fans have only known success, and I think that could turn out to be a problem.

I think it’s important to realize that this upcoming season is the start of the journey and not the end. This is what the club has been working towards, getting into MLS. And that brings a whole different level of soccer that fans not only will want to learn to stay up-to-date but also grasp the reality of the situation. It seems like MLS also knows, almost making fun of the team’s first three matches being against top clubs.

Nobody said it would be easy. 😅 pic.twitter.com/7Ak5cGKYfk

In the history of MLS, there have been 16 expansion teams after the original 10 teams started the league in 1996. I am going to go through each of those 16 teams, and how they performed in their inaugural season in the MLS.

Chicago Fire SC had far and away the most successful inaugural season. In 1998, with head coach Bob Bradley, the Fire won the double, beating D.C. United and Columbus Crew SC in the US Open Cup. They finished second in the Western Conference and third in the league overall. This is the bar for an expansion team.

The Fusion entered the league at the same time as Chicago Fire SC and performed well enough to make the playoffs in their first season, which was a loss against D.C. United. They also had over 20,000 people at their first match against D.C. United. The Fusion — and one of the 10 originals, Tampa Bay Mutiny — exited the league after the 2001 MLS season.

Chivas USA is the first expansion club which didn’t make the playoffs, finishing sixth place in the Western Conference and a record of 4-22-6. The 1-8-1 start for the club led to its head coach Thomas Rongen to become its sporting director and assistant coach Javier Ledesma to become the interim head coach. Hans Westerhof was named its second head coach in its history in June 2005 but didn’t return after the 2005 MLS season.

Beginning in the same season as Chivas USA, Real Salt Lake had a similar ending record. They finished with a record of 5-22-5 and missed the playoffs. The club also missed the playoffs the next two seasons with a coaching change in one of them.

Houston Dynamo is another club who had a successful inaugural season, like Chicago Fire. They finished the regular season with a record 11-8-13 and second in the Western Conference. They defeated the New England Revolution in the MLS Cup, 4-3 on penalty kicks, to become the second expansion club to win the title in their first season.

Philadelphia Union is another team which did not make the playoffs in their first season, finishing seventh in the Eastern Conference and 14th overall. The club has only made the playoffs three times in their history but have made three U.S. Open Cup finals, losing all three.

Vancouver Whitecaps FC also ended the season outside the playoffs. They had an 11-match winless streak which led to the firing of head coach Teitur Thordarson. They finished the season in ninth place in the Western Conference and 18th overall.

The Timbers, starting in the same season as Vancouver, ended the season in the same place, on their couch watching the playoffs. They had a better season than the Canadian club, however, finishing in sixth on the Western Conference table and 12th overall.

Montreal became the third Canadian team in the MLS when it started in 2012, but the Impact also missed the playoffs that season, ending the season seventh on the Eastern Conference table. However, they did have a record-setting night when they played the Los Angeles Galaxy at home. There was an attendance of 60,860, which is the record for the most people at a professional soccer match in Canada. They are also similar to FC Cincinnati because they were moving from the NASL to MLS.

Orlando is the most similar to FC Cincinnati in terms of what it went through to get into MLS. It was a USL Pro club and then succeeded in getting a fan base and were awarded an MLS club. Their USL Pro license was then transferred to Louisville City FC, and James O’Connor was named Louisville’s manager, who we all remember and will see in the upcoming season.

New York City FC didn’t have a very successful first season, but its failure did lead to the hiring of Patrick Vieira. They finished the season outside of the playoffs and also second-worst overall.

Minnesota United FC is another team similar to FC Cincinnati in what it had to do leading up to its first MLS season. It was an NASL club which moved up to MLS in 2017 and is still building a quality roster. It missed the playoffs in both of its two seasons, finishing ninth in the first and 10th in the 2018 season.

Beginning at the same time as Minnesota, Atlanta is the opposite. It hired a great coach in Gerardo Martino and found players like Miguel Almiron and Josef Martinez, leading to a successful beginning. Atlanta finished fourth in the Eastern Conference in its inaugural season. In the 2018 season, it finished second on the Eastern Conference table and won the MLS Cup. It has also broken every attendance record in the MLS, with multiple matches of over 70,000 people.

The last expansion club before FC Cincinnati, it also had a good first season with head coach Bob Bradley. It finished third in the Western Conference but ended up losing 3-2 to Real Salt Lake.

FC Cincinnati has a long road ahead of itself, and fans keeping their expectations low — or at least not high — would be the best thing. Just enjoy this first season with the club and look forward to success in the future. Don’t think that just because FCC succeeded in the USL, that will mean FCC will succeed in the MLS right away. It is a whole new ballpark in terms of strategy, tactics and talent, and that will take time to get used to.