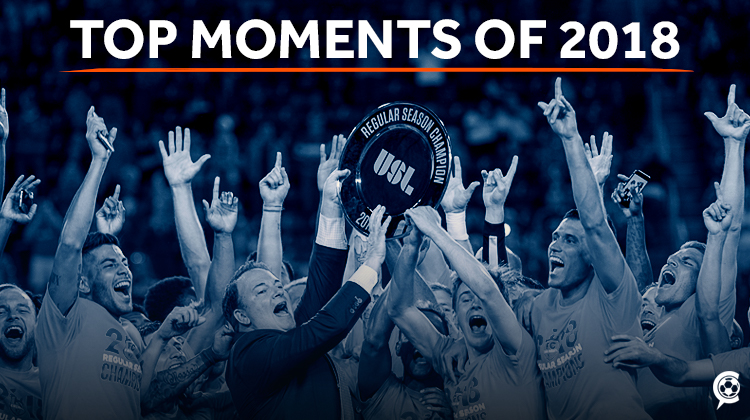 As 2018 comes to close in a few days, this is the perfect time to sit back and reflect on what a year it was for FC Cincinnati. As with every season, there were ups and downs, but this season seemed more special than in years past. With the MLS season set to start in a few short months, I asked the crew at Cincinnati Soccer Talk to give me their favorite moment from the past year.

Seeing MLS commissioner Don Garber announce FC Cincinnati as the next MLS franchise was one thing that I will never forget. From the first day, this was the goal for FC Cincinnati, and its dreams became the ultimate reality. The announcement was culmination of years of hard work, from the club and fans alike. From the time Major League Soccer launched in 1996, I never believed my city would be playing in the top league in North America. From its inception, this club seemed different. While the announcement seemed inevitable, it was surreal hearing Garber tell the world that Cincinnati had finally made it. 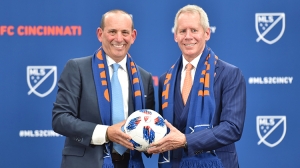 My favorite moment of the 2018 year has got to be being at Rhinegeist that day when it was officially announced that FC Cincinnati would be entering MLS. I had dreamed of this day ever since the league started back in 1996 and never thought I’d see a day that Cincinnati would get a team in the top division.

My favorite was the win over Detroit City FC in the Open Cup. There was so much vitriol from the Detroit fans thrown our way prior to the match, and with the MLS decision looming the match felt even bigger than just a Cup game. Then the tension during the match was epic, with the whole fan base worried Detroit was going to go up and then we scored in extra time to take the match. This was the most memorable match of the season for me and my favorite moment of the season!

My favorite moment was the USL Regular Season Championship celebration. The team dominated the league over months of games and rose to the top of the table. Now, in front of its fans it could receive the Shield as well as acknowledgement and praise. Jeff Berding gave a speech filled with emotion and his own excitement that ended up being made into a rap song and memes. The team walked over to the Bailey and lifted the shield to cheers and the Bailey broke into “Campeones.” As the team circled the pitch, including everyone in the stadium in the celebration, the Bailey didn’t stop singing. It was truly a moment when club and city came together and celebrated something special. A moment that will last in the memories of many for a long time.

I was right next to the goal getting pictures when Fanendo Adi netted his first goal for the Orange and Blue. Tension had built with several close chances for the star player, and a back and forth game with rivals Pitsburgh Riverhounds had everyone on edge. It started as a counter attack from the back and a long pass up to Adi. Despite a defender hanging on his back and two others in the way, he was able to body through and fire a shot past the keeper for the game-winning goal. I have never heard Nippert Stadium that loud. I was deafened as Adi celebrated with Alan Koch and the rest of the team. That goal secured three points on the way to a record season and made FC Cincinnati the first team in the league to secure a playoff spot. 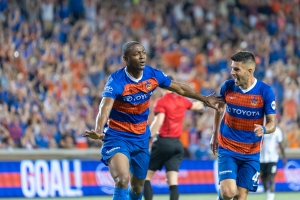 Rob Peirce – MLS Announcement
Before he said the magic words granting FC Cincinnati entry into MLS, commissioner Don Garber told those roasting at Rhinegeist to look to their left and right, because they’d remember who they were next to for a long time. His instructions were meant for those on stage behind him and on the flanks and in the back, but I obliged just the same. I looked at Bryan Weigel to my right, Trisha Houser to my left and Nick Seuberling beyond her, collectively the working media representing Cincinnati Soccer Talk. I remember the chills I felt during the event. I remember Cincinnati Mayor John Cranley reflecting that throughout his council’s stadium debate, “As we listened to each other, there was one group that was ahead of all of us. And that was the fan base of FCC.” Afterward, I was back in my natural habitat, writing my story in the Rhinegeist media room. By the time I got to Fountain Square, the festivities had finished. But the day — from start to finish — is forever etched in my memory. FC Cincinnati and indeed the city finally broke out of purgatory after months of restless agony. The moment was here — my favorite moment of 2018.
Trisha Houser – Playoff Victory over Nashville SC
My favorite moment of the 2018 season was the first playoff match against Nashville SC. This was a match that had everything on the line — everything the players had worked for all season. After 23 unbeaten matches, the club was finally at the playoffs. When it was announced that FC Cincinnati would be playing Nashville SC again, just one week after a 3-3 draw in Nashville, the nerves began. Everyone knew Nashville was a rough club to beat; after all, after a total of four matches, including one preseason, FC Cincinnati had never beaten Nashville. Of course, it had never lost either. When extra time resulted in a draw, our biggest worry was confirmed — the match would come down to penalty kicks and tired legs. The entire stadium was still. The cheers of the Bailey could still be heard over the pounding of our hearts. Five penalty kicks were made for each side, leaving it at a 5-5 draw once more. On the sixth kick, Nashville missed, and I think the entire stadium went silent for a beat, knowing that if FC Cincinnati made the next one, it had broken the Curse. As Kenney Walker stepped up, I held my breath, and my two best friend’s hands – Abbi and Jesse. I knew, the whole stadium knew, that the second Walker’s foot hit the ball, FC Cincinnati was gonna win. And as the ball hit the back of the net, everyone lost their minds (and I lost my voice). That was a moment I’ll never forget — standing in the Bailey with all of my friends, tear streaming down our faces (or was it just mine?), filled with the most joy I had ever felt. This last season was one to remember, one we’ll never forget. 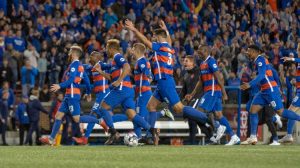 I would have to say that my favorite moment of 2018 season was during the shoot-out against Nashville SC in the first round of the playoffs. Sitting in the general admission section, it was really cool being able to see everyone come down to the front of the section to cheer on our team and will them to a playoff victory. I’ll never forget hugging a random stranger after Kenney Walker buried the final penalty to send FC Cincinnati on to the next round. The victory was even more sweet considering the first four preseason and regular season matches all ended in draws and that we will eventually see them in MLS again soon.
Follow Chris on Twitter @iamchrisasbrock