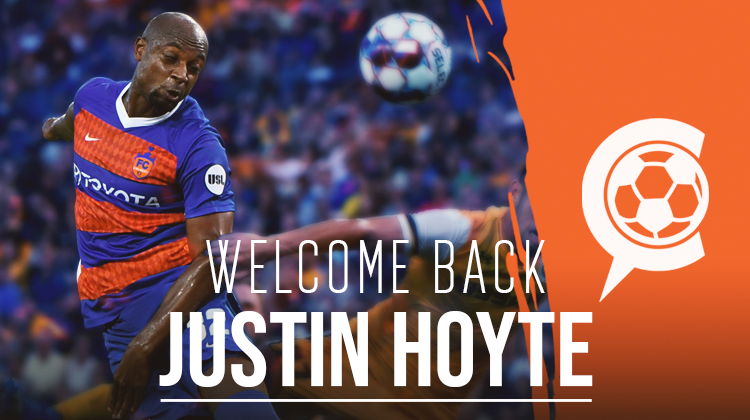 A day of giving continues. FC Cincinnati announced the fourth Monday signing as current right back Justin Hoyte. With just two to go, Hoyte was quickly becoming a favorite guess online. Hoyte played 30 matches for the Orange and Blue in 2018 and featured on the right side. He became famous for pushing up the field when the ball was center or on the left side. This resulted in him being open quite often and the fans quickly took notice. “Hoyte is always open” is a common phrase heard around the Cincy soccer sphere of influence.

Hoyte is currently the eldest player on the roster at 34 years old. He has pushed out younger players vying for his position and has only missed matches for injury. Hoyte plays disciplined defense, and his performance, along with Evan Newton’s USL Golden Glove award, led to several clean sheets. A native of England, Hoyte will occupy an international roster spot on Cincinnati’s 2019 MLS roster.

With age comes experience. Hoyte has played for a slew of clubs in his career, most notably Arsenal and Middlesbrough, where he racked up 162 appearances. He has also played for the country of Trinidad and Tobago. His last country appearance was in 2016.

“I’m really, really excited. It’s been a long-term goal of mine to play in MLS,” Hoyte said in a media release. “I’m excited to make the move with Cincinnati after two great years with the organization. It’s exciting times ahead for the club and for me.”

Coach Alan Koch followed by saying, “Over the course of the last two years with this club, Justin has proven time and time again that age is just a number. He has made a lot of sacrifices to be part of this group and is very respected by his teammates. He leads through actions in how he prepares for training and games, and that professionalism rubs off on everyone on the team.”

We expect FC Cincinnati will make one final signing this afternoon, so stay tuned to cincinnatisoccertalk.com.

We’ll have more coverage of today’s signings and other potential signings on a special Tuesday edition of CST at 9 p.m. on Facebook, YouTube, Twitter and Twitch.