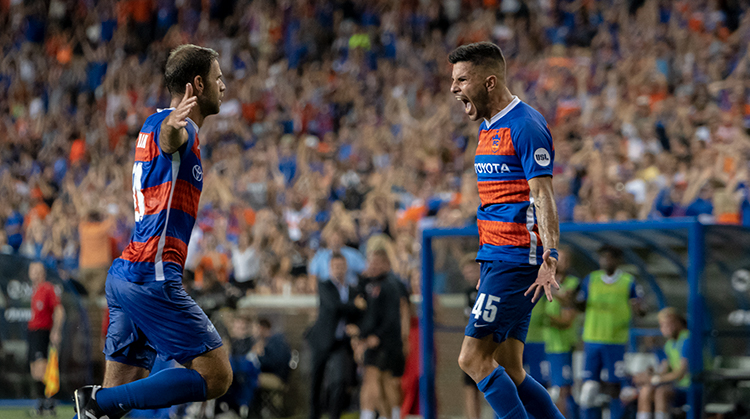 ay up to date with Cincy Soccer Talk for coverage of FC Cincinnati and the 2019 Major League Soccer Half Day Trade Window.

3:22 PM- OFFICIAL: FC Dallas trades forward Maxi Urruti to the Montreal Impact in exchange for $75k in TAM and the 10th overall pick in the 2019 MLS SuperDraft. Urruti, 27, has been a regular piece in Dallas the last 3 seasons with 29 goals and 20 assists.

In an offseason of change, Sunday’s half-day trade window took it another step further.@CarterBaum breaks down the trades of Tesho Akindele and Maxi Urruti.https://t.co/yTj3gNGDTf

3:10 PM- OFFICIAL: Vancouver traded for Montreal GK Maxime Crepeau. Crepeau was the 2018 USL Goalkeeper of the Year after spending the season with the Ottawa Fury. Orlando receives $50k in TAM and Vancouver’s Third-round pick in the 2020 SuperDraft

3:06 PM- OFFICIAL: FC Cincinnati will receive goalkeeper Spencer Richey from the Vancouver Whitecaps in exchange for FCC’s Third-round pick in the 2020 MLS SuperDraft. Richey was the starting keeper for Cincinnati during the second half of the 2018 USL season. For more details make sure to read Cincinnati Soccer Talk’s story.

2:01 PM- OFFICIAL: Chicago Fire has traded for forward Fabian Herbers from the Philadelphia Union. The Union will receive Chicago’s Second-round pick in the 2019 MLS SuperDraft.

NEWS | The Club has acquired forward Fabian Herbers from the @PhilaUnion. Welcome, @fherbers9393!

11:29 AM- OFFICIAL: Vancouver acquires rights to Motherwell midfielder Andy Rose from Seattle for $50k in TAM. Rose contract with Motherwell ends this summer and he could be in line for a move back to MLS then.

This is what I got so far w/ more to come!

10:26 AM- OFFICIAL: Steven Goff reports that Colorado Rapids are trading GK Zac MacMath to Vancouver. MacMath appeared twice for Colorado in 2018 and has been the main backup for most of the past 4 seasons.

Just landed in Chicago and got some trade news coming in. Hearing FC Dallas is going to be very busy today. One trade I heard last night in ATL: Tesho Akindele to Orlando City. #MLS

Check out other key dates for FC Cincinnati as they build their roster heading into the 2019 MLS season.