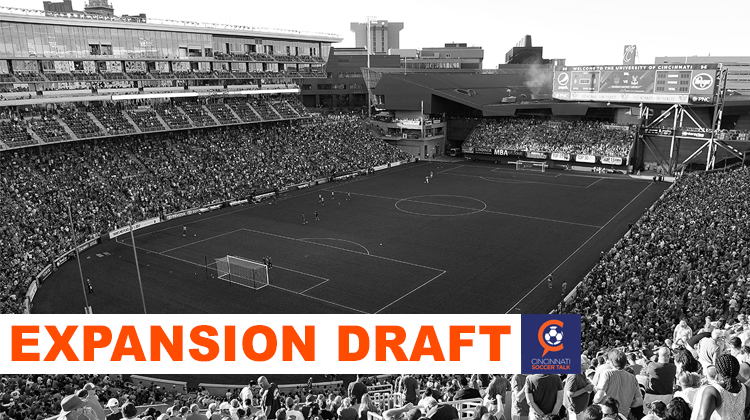 Let’s take a look at five players we believe are good choices for FC Cincinnati to select in the 2018 MLS Expansion Draft.

MLS on Monday released the list of players eligible for the 2018 MLS Expansion Draft to take place at 2 p.m. on Tuesday.

FC Cincinnati will get the choice of five players to select during the draft but will be limited to one selection per team. The club could then keep its five choices or swap them for other assets as it wishes. While expansion drafts of years past have seen most clubs add depth to their rosters, this year’s draft has some interesting talent that FC Cincinnati could stand to benefit from in its Starting XI.

The big name that jumped out right away in the list of players eligible for the Expansion Draft was LA Galaxy and USMNT midfielder Perry Kitchen. The defensive midfielder joined the LA Galaxy in 2018 after spending time overseas with Heart of Midlothian (Scottish Premiership) and Randers (Danish Superliga). During his time at Hearts, he was named the captain for a spell and had a successful run until a change in management. After his time at Randers, he came back to MLS on a deal that saw the Galaxy trade $100,000 in general allocation money and $200,000 in targeted allocation money. At 26, he clearly has value around the league and is a piece that FC Cincinnati could use to help anchor the spine of the club for years to come. His contract of $474,167 might give the club a little pause but this is a position where they can get a quality American and not have to use a precious international roster spot. -Brad Weigel

Before the teams announced their protection lists, I had a couple of players that I was reasonably dreaming would be available, and one of them was Florian Valot. The 25-year-old French-born midfielder is built to fill the CAM position, and he is known for his through balls and short passing style. Valot did tear an ACL this year, but his player rating (7.24) over his 13 appearances in 2018 ranked him just behind Julian Gressel of Atlanta. I think any FC Cincinnati fan would take that kind of performance. Valot may not be fit at the start of the season, but if he is able to return by mid-season he will be worth the wait and the cost ($72k). This is a no-brainer in my book because the risk versus reward makes him too tasty to pass up. -Ken Hoetker

With a new team comes a variety of issues, but one of the ways to get through challenging times that will inevitably come during FC Cincinnati’s first season is to shore up the back line. One way coach Alan Koch can do that would be to bring in a right back as solid as they come in 2017 MLS Cup Champion Steven Beitashour from LAFC. Beitashour made 27 or more appearances in six of the last seven seasons and should be familiar with Koch as they spent time together during the 2015 season with the Vancouver Whitecaps. His time at Vancouver should also have prepared him for the realities of playing on turf that he would experience at Nippert Stadium.  At just under $300,000, his contract is in line with what you’d expect from a starting XI caliber player, and at age 31, he still should have a couple seasons of wear left on his tires. Koch will need to lean on an experienced vet to help get his squad through the trials and tribulations of its freshman campaign, and that is why I could see Beitashour in Orange & Blue come March. -Brad Weigel

Mickey Ambrose is a little bit of a wild card. He came up through FC Dallas’ academy before he left for the University of Maryland, where he made 71 appearances for the Terrapins. Upon graduation, Ambrose signed with the Austin Aztexs of the USL and eventually found his way to Orlando City SC of the MLS. In 2017 the left-back was selected by Atlanta in the expansion draft, and in 2018 he acquired over 700 minutes with the highly talented first team. He stepped in admirably for the injured Greg Garza before Ambrose injured his right knee (meniscus) in July while getting time with Atlanta’s USL team. Again, he is a risk but at 25 years old and only $68k FC Cincinnati could have a left back battle (Blake Smith) that would benefit the team. -Ken Hoetker

I have to admit that I stole this one from Bobby Warshaw’s article from earlier today, but the fact remains simple: If you have a chance to grab a high quality starting center back, you need to jump at the opportunity. Given that the position has been proven difficult to fill in MLS, Ziegler provides Koch the opportunity to plug in a starter on Day 1. The two time World Cup veteran from Switzerland doesn’t come cheap and may give the club some pause at $800,000 per year, but FC Cincinnati has the extra allocation money to buy his contract down to an affordable level in the salary budget. Given his stature having played at some high profile clubs (Tottenham, Juventus, Sampdoria, Fenerbahçe), Ziegler will be able to anchor the back four and could help provide a comforting presence that could allow a player like Forrest Lasso to grow and play along beside him. Even if Ziegler isn’t in FC Cincinnati’s long-term plans, he is one of the more valuable players in the draft and could provide a trove of assets to help build the club. Either way, it’s hard to see FC Cincinnati not taking the center back in the draft. -Brad Weigel

For a list of all available players for Tuesday’s MLS Expansion Draft please visit MLSsoccer.com.

Let us know who you think FC Cincinnati should look at.

Stay tuned for the MLS Expansion Draft Special this Tuesday night at 9 pm.