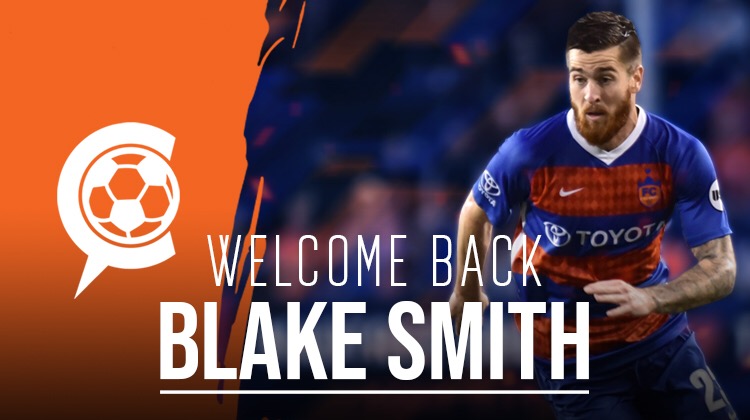 For the third Monday in a row, FC Cincinnati has announced a player signing as Blake Smith will join the club in its inaugural MLS Season.

Occupying a domestic roster spot, Smith is the 6th member from the 2018 USL Regular Season Championship squad to join FC Cincinnati for their inaugural season in MLS. Smith last played in Major League Soccer during the 2014 campaign with the Montreal Impact.

“I’m very excited. It’s been a long journey to get back to MLS, but I have always had confidence in my abilities,” Smith told FC Cincinnati. “Fortunately, my move to Cincinnati has been a great experience thus far. The coaches believe in me enough to make the jump to the next level, so I’m very excited.”

Smith made 28 starts for the Orange and Blue last season, scoring the first goal of 2018- a game-winner against the Charleston Battery. Smith also had four assists on the season, the most by any FCC defender.

“I think Blake really showed his character with us last year,” Koch said of Smith. “There were a number of times when other players were fighting for his position and he never gave that position up. We saw tremendous growth in Blake’s influence on the team as the season went along. I’m incredibly proud to take him along on this journey with us.”

Smith originally signed with FC Cincinnati in 2018. Prior to joining FCC, Smith was on loan with Indy Eleven in 2014, played for Swiss-side Yverdon-Sport in 2015, and returned back to the States to play with Miami FC from 2016-2017.

With the list of each team’s protected players for the expansion draft now available to FC Cincinnati, there is an increased possibility that more player signings could be coming in the near future.

We’ll have more coverage of Smith’s signing, and other potential signings, on a special Tuesday (12/11) night live edition of CST at 9 PM ET on Facebook, YouTube, Twitter and Twitch!