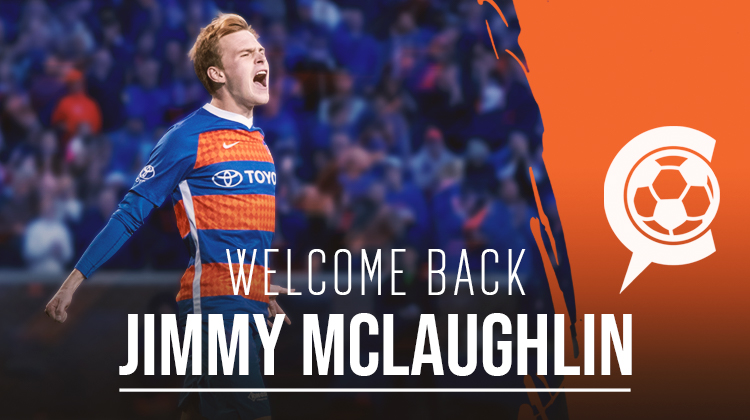 FC Cincinnati officially announced Jimmy McLaughlin, one of the club’s original players, will be making the move up to MLS with the club. McLaughlin has been one of the most popular members of the squad for fans and has also been featured in the most matches in club history, surpassing over 100 appearances in his three-year history with the team. McLaughlin will take up a domestic spot on the MLS roster.

McLaughlin, age 25, is the second FCC original to sign with the MLS roster, the first being Corben Bone. McLaughlin had over 30 appearances in the 2018 season with FC Cincinnati, tallying two goals and four assists. In his first season with the team in 2016, McLaughlin totaled four goals and two assists, and then the following season, he had a career-high five goals and three assists.

“Going to MLS with this club is so special and it means the world to me,” McLaughlin said in an FCC news release. “FC Cincinnati and the city of Cincinnati, in general, has been incredible, not just for my soccer career, but also for my life. I’ve loved every minute that I’ve spent in this city. The people have welcomed me with open arms. I’m so honored to continue on with this team and progress to the next level with them.”

McLaughlin began his career in MLS as the Philadelphia Union’s second-ever Homegrown player after playing one year at Colgate University in 2011. He appeared seven times for the Union and also played extensively for the Harrisburg City Islanders, now known as Penn FC. He appeared 56 times for the Islanders, including scoring eight goals in all competitions from 2012-2015.

“For our club and for the fans, it’s huge to take Jimmy, because he’s been with this club since the very beginning,” coach Alan Koch said in the release. “From a coaching perspective, however, it’s really what he means to the team. Whether he starts or comes off the bench, he brings us so much energy and can be very influential in a game. He’s grown into a very, very good professional player and I know he’s hungry to grab the opportunity that he’s going to be presented.”

McLaughlin’s official announcement ends the long day of announcements of former USL players making the move up to MLS with the team.

Stay tuned to Cincinnati Soccer Talk as we detail the signings as well as Tuesday’s Expansion Draft.