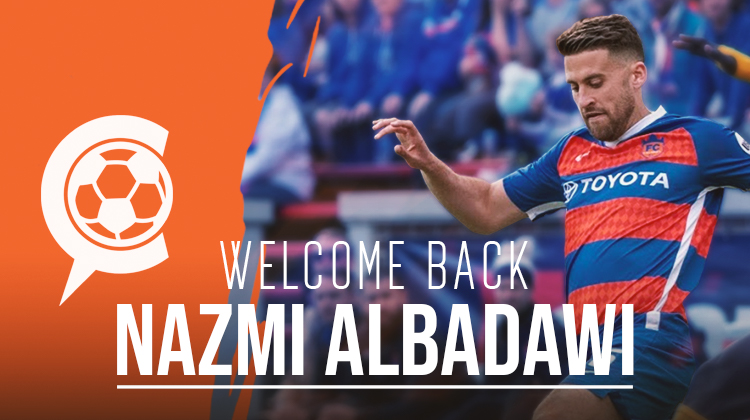 A source tells CST that Nazmi Albadawi has signed a one-year MLS contract with FC Cincinnati.

As originally reported by Cincinnati Soccer Talk on Saturday, FC Cincinnati confirmed Monday that Nazmi Albadawi has signed an MLS contract for the 2019 season.

“It’s always been my dream to play in MLS. I’ve had a few opportunities in the past, but they didn’t necessarily feel right at the time,” Albadawi said in a media release. “Now, I’m very grateful, very thankful to Cincinnati for giving me the opportunity. I feel very at home at this club and I couldn’t be happier to make the move with them.”

Before Albadawi joins the club he will join Palestine for their training camp prior to the 2019 AFC Asian Cup which runs from January 5- February 1 in the United Arab Emirates. Palestine will play 4 friendlies prior to the competition, Yemen (Dec. 20), Iran (Dec. 24), Iraq (Dec. 28) and Kyrgyzstan (Dec. 31). The final roster is expected to be announced the last week of December.

Nazmi Albadawi has signed a one-year MLS contract to play for FC Cincinnati and will be staying in the Queen City next season, according to a source. FC Cincinnati club officials did not immediately respond Saturday when asked for comment.

It was reported that Albadawi signed a multi-year USL contract starting in 2018 but because of FC Cincinnati’s jump into MLS, new contracts would be needed for any players coming up as well. FCC has officially announced Fanendo Adi, Fatai Alashe, Corben Bone, Emmanuel Ledesma, and Forrest Lasso on the 2019 MLS roster. The Athletic has also reported Jimmy Mclaughlin will be joining the expansion squad.

Last year Cincinnati Soccer Talk reported that Nazmi Albadawi would be joining FC Cincinnati after receiving an offer to join the USL side. He also received a similar 2017 offer from the Chicago Fire. Albadawi picked FCC, and performed well, earning 11 goals and four assists in 29 appearances.

He shifted positions and was asked to play in several formations under FC Cincinnati coach Alan Koch. While some positions were better suited to his scoring talents, he also shifted into support roles which kept him on the field. This flexibility became an asset as the season went along.