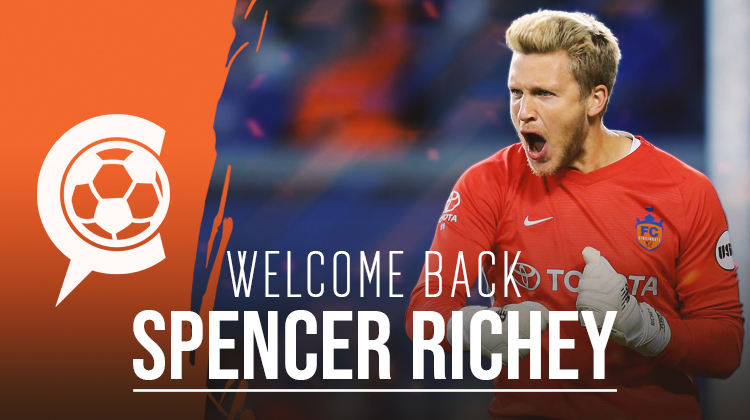 Richey is the sixth player and the first keeper acquired for FC Cincinnati’s inaugural MLS season. A 2018 loanee for the USL version of FCC, Richey will occupy a domestic roster slot in MLS. The Orange and Blue sent a 2020 third-round MLS SuperDraft pick to the Whitecaps for his rights.

The Seattle native was listed on Vancouver’s senior roster at the beginning of 2018 with a total compensation of $68,254.20 and will most likely occupy the same roster designation for 2019.

“I’m really looking forward to returning to Cincinnati,” Richey said in the club’s press release. “I could see where this club was heading when I first arrived on loan. I knew there was a possibility of coming here not just for the short term but also the long term. I’m excited with how things have played out and I think this will be best for my career.”

Richey joined FCC on loan from Vancouver in 2018 and began the USL season as the backup to 2018 USL Golden Glove award winner Evan Newton. However, because of an injury to Newton and superb play, Richey earned the starting role by the end of 2018, starting 16 times including the two USL Cup playoff matches.

“Spencer is someone that we are very excited to bring back to Cincinnati as we continue to build our roster,” FC Cincinnati coach Alan Koch said. “Last season, he battled and remained resilient in a competitive goalkeeping environment and showcased his abilities with fantastic performances at the end of the year. We believe Spencer displayed significant growth over the course of the year and we are excited to give him a well-deserved opportunity with this club in MLS.”

Richey logged a 69.2 percent save percentage in league play to go along with five clean sheets. His performance in the dying minutes of the first round playoff match was of note, including denying a shot from Nashville forward Brandon Allen. Richey should prove to be a quality backup or spot starter in 2018. He will provide continuity in the goalkeeping corps and should help the others in his position group as they adapt to the Queen City in 2019.

Tune into the Cincinnati Soccer Talk EXPANSION DRAFT SPECIAL on Tuesday and look for our new podcast on your favorite podcast network each week!