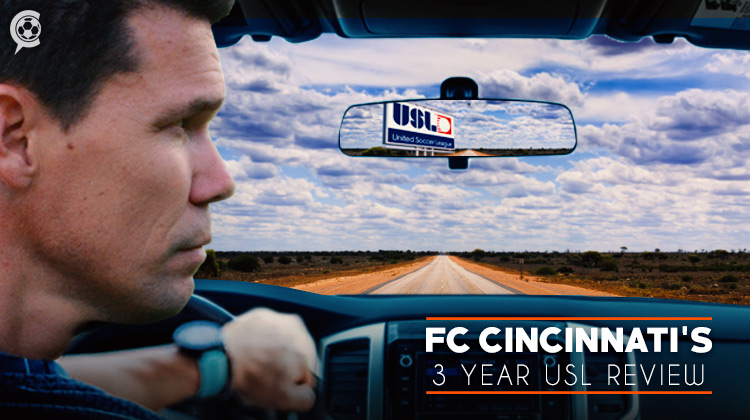 Three years built this fan base and built a city’s love for soccer. It should be analyzed a bit deeper before the fences are jumped for what many assume to be greener pastures.

This three part series is a look back on FC Cincinnati’s short stint in the USL. Was it a success? If so, in what ways and in what areas could it have gone better? Part one will review FC Cincinnati’s on the field success. Part two will take a look at FC Cincinnati off the pitch and Part three will be a outsiders’ perspective from other writers around the USL.

Fans across Cincinnati are eager to start the next MLS chapter. Understandably so — new things are exciting. It is thrilling and Cincinnati Soccer Talk was even quick to flip the page. Just days after falling out of the 2018 USL playoffs a summary podcast was released and a What’s next for FC Cincinnati article was put out. Both were well done and they helped ease the fresh pain many fans felt. However, what does it all mean? Those three years built this fan base and built a city’s love for soccer. It should be analyzed a bit deeper before the fences are jumped for what many assume to be greener pastures.

FC Cincinnati made a quick statement upon entering the soccer landscape. Having first absorbed some marketing ridicule, the team quickly bounced back with a big name soccer hire, John Harkes. As a new coach, Harkes reached out to lifetime contacts and connections. He assembled a squad of MLS fallen misfits and USL wannabees for Division III soccer. Many of the names in that 2016 roster are now recognizable, but most were unknown at the time. The first year had its ups and downs, but FC Cincinnati put together a good season. As an expansion franchise, it finished third in the Eastern Conference and secured a home playoff match. Then the first year dream fell apart when it was eliminated by the Charleston Battery.

FC Cincinnati earns an “A-” in year one. A new team created from scratch, finished third, generated a Golden Boot winner and started to build a winning club culture. Those items outweigh the negatives of one playoff loss. Besides what are the chances the playoff loss turns into a trend anyway?

The club made another bold statement, but this time was a reverse 2016. Harkes was fired right before preseason. Harkes had helped build the roster, and Alan Koch, who had been brought in to run an academy, was named the new head coach. New players were signed as the preseason and season went on, but the stability of 2016 was lost. Not just FC Cincinnati went through changes, the league itself was promoted to Division II, and with that came new teams and new money. FC Cincy had resources galore, but time and discipline seemed to be the enemy. Four red cards had been earned by the Orange and Blue in the first seven matches. Star player Djiby Fall was suspended for biting a player from club rival Louisville City FC. The season was headed for disaster and even making the playoffs was not a certainty.

Then a magical run, outside of USL play, saved the season for most fans. Despite the league ills, Cincy pieced together a good U.S. Open Cup performance, then another, then another. FC Cincinnati made it through the early rounds and then beat the first MLS team, fellow Ohioians the Columbus Crew. Then they beat the Chicago Fire and advanced to the semifinals of a cup most USL clubs never have a chance of winning. Cincy went up 2-0 on New York Red Bulls and then finally collapse under the sheer talent of Bradley Wright-Phillips. FC Cincinnati continued spotty league play but finished sixth place, good for an away playoff match vs. Tampa Bay Rowdies. Rowdies won the match 3-0 and capped off the most confusing FC Cincinnati year.

Season two earns a “C-“. The saving grace in league play was that FC Cincinnati secured a playoff spot, but not one that they had a chance of winning. Winning two MLS matches brought so much hype and prestige to Cincinnati soccer it buried the fact that the team was actually quite average. Players reportedly struggled to play in small USL environments, the squad lacked chemistry and discipline, and the team lacked creativity outside of Djiby ball. Something needed to change, and the club was willing to spend to make it happen.

Riding an MLS hype train, FC Cincinnati spent big in the offseason. Rival D2 league NASL collapsed, leaving valuable players on the market, and no one was in better position to grab them than Cincinnati. FCC took many of the best and formed an NASL All-Star squad, adding in big international signings. This time Koch had a full preseason, and he brought everyone in early. A long preseason got the team adjusted to his style, and FCC came out swinging.

The first punch went to Charleston Battery, a team FCC had yet to beat. Indy Eleven fell in its first of three vs. Cincinnati. Rival Louisville continued to be a bother, winning the Dirty River Derby, but Cincy still claimed a win late in the rain. FC Cincinnati steamrolled its way through the USL, dropping only three games and setting the league record for points and wins as well as earning the Eastern Conference regular-season championship and nabbing a few player awards and records. Despite the high level of performance, Cincy still lost its first game in five months in the second round of the USL playoffs vs New York Red Bulls II. Playoffs continued to be a problem.

On the pitch, Cincy earns a “B” in year three. It had a better season than any modern-era USL team, and that can’t be overlooked. But the club still failed to win a playoff championship. That is what drops them. American sports are all decided by playoffs, and no matter the season, the team that wins it is the one written in ink.

What Does It All Mean?

Was FC Cincinnati’s years in USL a success? In a no salary cap system, FC Cincinnati proved you can buy enough talent for a playoff spot. It also proved three years isn’t enough time to buy a Championship. Given enough time, a team with FCC’s resources would eventually win the playoffs, but that didn’t happen here. FCC’s success on the field comes locally. It gave a city starving for sports wins just what they needed, and the people responded. Even in 2017, the fans loved the team and made excuses for the team because that team provided them with big wins and hope. There is no absolute standard to measure success outside of trophies. If that is the standard, FCC did not meet it. However, if success is bringing soccer to a city and providing that city with a winning atmosphere, then FCC was successful.

Will FC Cincinnati have a USL legacy? Not long-term. Most of the fans today will remember the club and tell stories over the next couple of years. FCC also put many hard-to-erase performance records on the USL books, but in the end, it was only around three years. The USL is still a growing league with a changing history. Teams come and go, and like Orlando City before, fade into history. Most FC Cincinnati fans know Orlando started in USL before transitioning to MLS. How many know it won two championships in four very successful seasons? Many USL fans today are only aware of the league since they came into it. The league will continue to shift, and some relevance will be lost.

Did it matter? Did FC Cincinnati’s play help the side go to MLS? The past three years mattered to anyone apart of them. Part two of this series will address issues off the field and those probably made a bigger impact to MLS. If anything helped grab attention it was the USOC run. FCC became the first USL club in years to play on ESPN. A coin flip might be the club’s biggest hero. FC Cincinnati had a 50/50 shot of hosting each USOC match and Cincy won every single one. Columbus, Chicago, and New York all traveled to the Queen City and with them, MLS brass. FC Cincinnati was thrust into the limelight and those matches factored into FCC’s bid in some way.