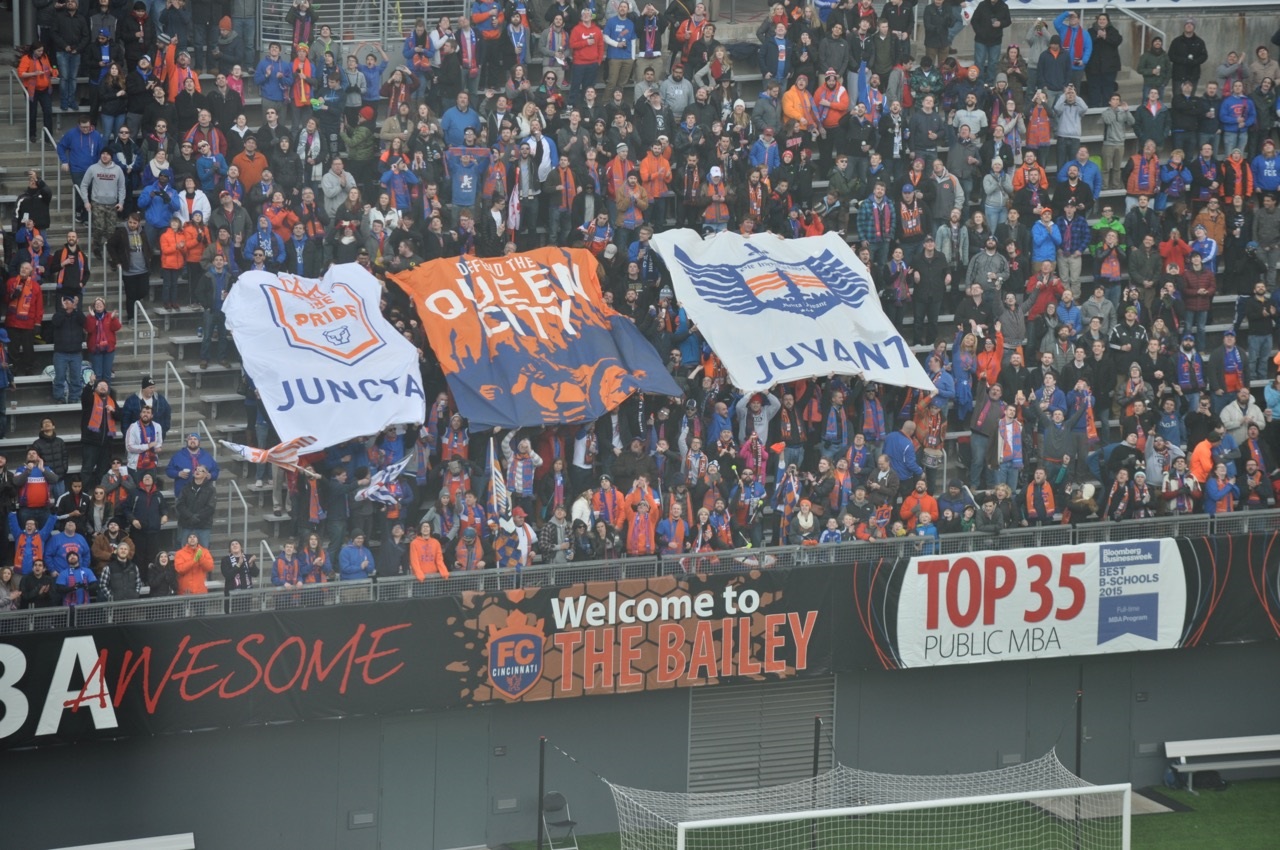 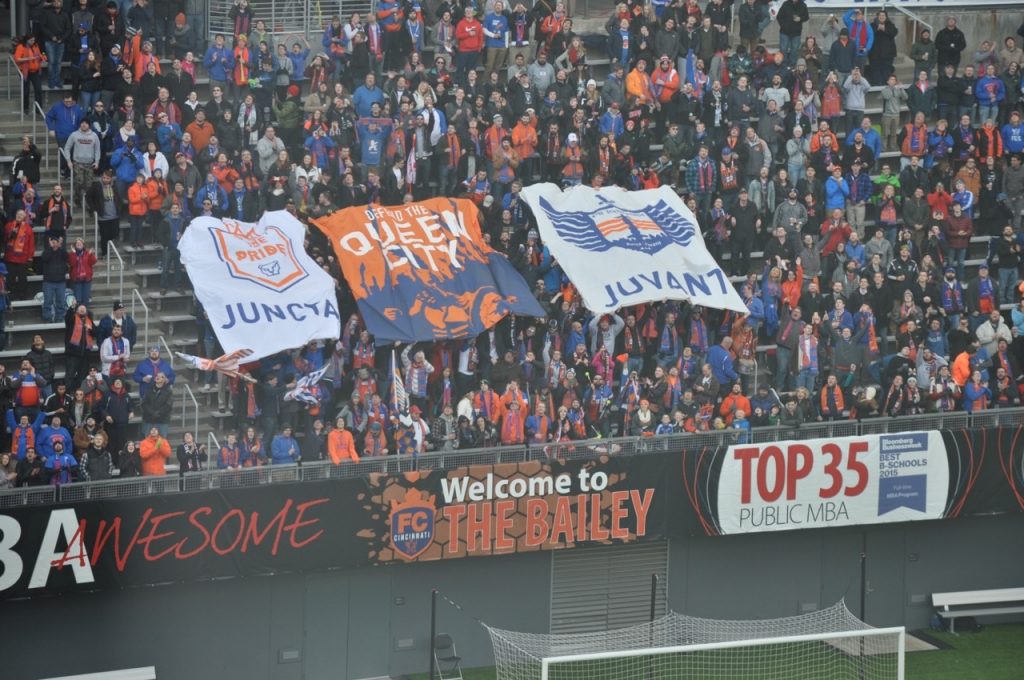 Hello Cincinnati Soccer Fans! The home opener is in the books and the team capped it off with a 2-1 victory over the Charlotte Independence. Not only did the team take the lead in the Queen Cities Cup but FC Cincinnati fans came out in droves setting the high water mark in 2016 USL attendance at 14,658. The atmosphere was electric and soccer in Cincinnati looks to be off to a hot start. This week the club will face Louisville City FC in the newly created River Cities Cup. Both supporter’s groups have been battling it out on social media looking forward to what will surely be a hotly contested match. This week we will recap the 2-1 victory, tell you what you can expect from the game day environment, discuss a local icon that disappeared, and provide more details of what to expect from this week’s match.

Hometown Hero Headlines Inaugural Home Win – FC Cincinnati kicked off their home opener in front of an impressive crowd of 14,658 with a 2-1 win over the Charlotte Independence. Sean Okoli kicked off the scoring in the 5th minute with a stellar scissor kick that landed him in the 4th spot on SportsCenter’s Top 10 plays. Summit Country Day’s own Austin Berry netted in the 53rd minute with a diving header off a cross from Jimmy McLaughlin. The Independence scored a minute later but the Orange & Blue were able to hold the away side scoreless for the rest of the half and move into 5th place in the Eastern Conference.

20 Years Later, John Harkes is Part of Another Soccer Beginning – Coach John Harkes was featured in an article by the Washington Post’s Steven Goff. Goff does a great job discussing how Coach Harkes transitioned from playing soccer in England to MLS, and then became coach of FC Cincinnati.

Opening Night Observations – Are you curious about what to expect at Nippert Saturday night? Nick Seuberling does a great job breaking down the game atmosphere so you can plan accordingly for the Louisville City match. Ronny Salerno and Tom Niehaus did a great job for Die Innenstadt to recap their Opening Night experience as well. I encourage you to give it a read here.

Winged Lion Takes Flight– Early Sunday morning, the Winged Lion banner was stolen from its perch in the top level of Nippert Stadium. The Winged Lion was a part of a 14 piece set that covered seats in the upper deck. Rival teams supporter’s had some fun with the club but luckily the banner was returned unharmed early Monday morning to campus police.

“We are happy the banner was returned and undamaged,” said FCC President and General Manager, Jeff Berding. “We thank UC Public Safety and the media for their assistance in its recovery and we consider the case closed. Lastly, we want to thank the person who returned the banner for doing the right thing.” 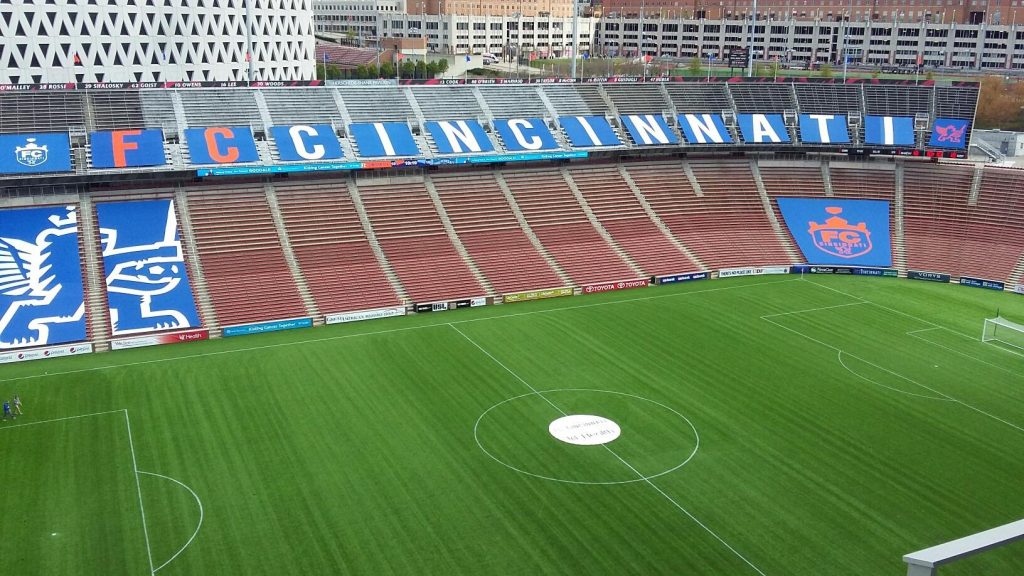 Pod Special Guest Andrew Wiedeman– This week on the Pod we welcomed the first goal scorer in FC Cincinnati history. We dug into important topics like how he can keep his hair so perfect during a match, Skyline or Gold Star, and most importantly if he had tried the Cincinnati diet staple Goetta. Andrew also shares what it has been like to move to Cincinnati and who the team Ping Pong Champion is. You can download the podcast through our website, iTunes, and Stitcher.

The final Youth Soccer Community Day takes place this Saturday. Any child in their soccer jersey can receive entry into the game for $1. This promotion is only available at the Nipper Stadium Box Office on game day.

Locally the game will be broadcast live on Star 64 or on ESPN1530AM. You can also stream via the USL YouTube channel.

Die Innenstadt– NEW LOCATION!!! DI will meet at Mecklenburg Gardens starting at 3 p.m. with the march starting around 5:45 p.m. to Nippert Stadium.

The Pride–  will gather at the Brass Tap at U-Square starting around 4 p.m. with the march to the stadium at 6:10 p.m. Members of The Pride will receive 15% off their bill at Brass Tap.