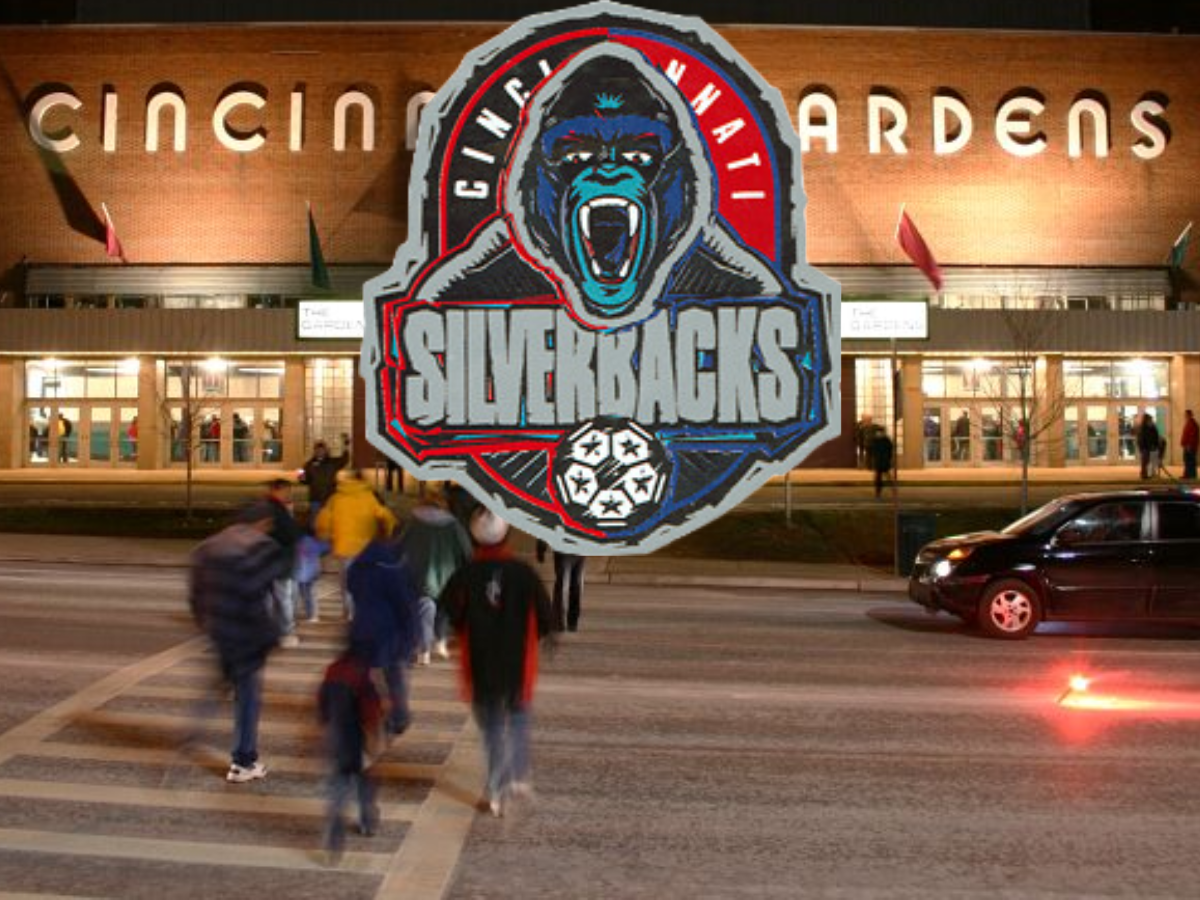 Let’s rewind to 1995, Cincinnati, OH.  Bob Huggins is in his sixth season as head basketball coach at the University of Cincinnati.  He would lead the Bearcats to the Elite Eight that year before a heartbreaking loss to Mississippi State.  Elsewhere, the star-studded Cincinnati Reds would be swept by the dominant Atlanta Braves pitching staff in the NL Championship Series, capping off an 85-59 record.  Lastly, the struggling Bengals would finish 7-9 and third in the AFC Central improving slightly upon their 1994 record of 3-13.  With all the excitement that was happening around the city, it’s easy to forget that 1995 was also the inaugural season for the Cincinnati Silverbacks of the National Professional Soccer League.

The Silverbacks, formerly known as the Dayton Dynamo, were purchased in 1995 by Cincinnati Cyclones owner Doug Kirchhofer.  He then moved the team from Dayton to Cincinnati and renamed it the Silverbacks in a grand ceremony held in front of the gorilla exhibit at the Cincinnati Zoo.  One reporter at the scene remarked that they hoped the team would be more active than Colossus, the silverback gorilla habiting the zoo at the time.  Before the team could be active it had to be created.  Thus, Kirchhofer and his associates got to work.  They knew that they had to put people in seats for their inaugural season, but how?  Their plan involved heavy marketing to the over 50,000 youth soccer players in the region. This included the hiring of local youth soccer coaches to the front office staff and the recruitment of U.S. soccer star Bruce Murray. A Silverbacks kit listed on Etsy

So who was Bruce Murray? For those of you not familiar, here’s a brief overview of his career.  He began his professional days in 1988 with the Washington Stars of the American Soccer League.  That same year he found his footing with the USMNT earning a spot in the 1988 Summer Olympics.  After playing through World Cup Qualifying, he then started all three group stage matches for the United States in the 1990 World Cup, even scoring a goal against Austria.  In 1991, following the World Cup in Italy, he moved to the Maryland Bays of the American Professional Soccer League.  From there, he signed a full time contract with U.S. Soccer where he stayed until 1993.  Upon his retirement from the national team in 1993, he had appeared in 86 matches, scoring 22 goals making him the all-time leading scorer for the United States.  After his stint with the national team, he traveled abroad signing with Millwall of the English Championship.  Millwall would finish third in the table and narrowly missed promotion to the Premier League following two devastating semi-final losses to Derby County.  Murray’s time at Millwall was plagued by injury, eventually forcing him to return to the States in 1994.  At this point, he joined the Atlanta Ruckus before eventually coming to the Cincinnati Silverbacks.

A major component of the Murray signing was the strong recruiting skills of Silverbacks head coach Gary Hindley.  Hindley was somewhat of a legend among the NPSL.  He was fresh off a championship with the Cleveland Crunch and a highly sought-after coach.  His arrival in Cincinnati proved that the Silverbacks were not messing around.  He brought with him star Crunch forward Shawn Medved who would lead the Silverbacks in scoring during their inaugural year.  Within his first month as coach, he had lured stars from across the NPSL to Cincinnati, including Bruce Murray.

Murray’s signing to the Silverbacks earned him a full column in the Cincinnati Enquirer.  The article lauded him as the U.S. top all-time goalscorer and a favorite choice of U.S. coach Bruce Arena.  Cincinnati was lucky to get a player praised so highly by Arena, coach Hindley suggested.  As for Murray, he too seemed excited to be here.  He likened the Cincinnati Gardens crowd to one of English caliber and claimed that the atmosphere was one of success.  For reference, Millwall averaged 9,823 fans per game during Murray’s tenure, while the Silverbacks averaged only 3,759.  Those 3,000+ must have created quite the noise to be compared to the ruckus of English soccer.

The excitement was building as local soccer fans could hardly wait for the team to kick off.  The team certainly had the talent on paper to perform in the NPSL.  On a cloudy Saturday in October, the Silverbacks traveled North to face the Canton Invaders in their inaugural game.  Fans across Cincinnati turned to SportsChannel on their TVs to witness the historic event.  The Silverbacks would ultimately fall in this competition 11-9 despite goals from Medved and Murray.  Never fear said coach Hindley, this team just needed time to gel.  Their next challenge would be the former champion Cleveland Crunch in the home opener at Cincinnati Gardens.  The game would attract a near capacity crowd of 8,623 and include a pregame laser light show.  Despite all the flare, the Silverbacks would once again come up short, this time by a score of 15-7.  The game was ugly and had Silverbacks players accusing the Crunch of playing dirty.  To make matters worse, Cincinnati Gardens severely underestimated the crowd that this game would attract.  Staff at the Gardens only opened half of the concessions on the first level, leaving the entire second deck without a place to grab a bite.  This led to lines that would make halftime at TQL look like child’s play.  What would happen next was akin to 2020 FCC.  The Silverbacks would lose their next six games, off to an 0-8 start in their first year.

Things were going horribly wrong for coach Hindley, and Bruce Murray?  Well, he was nowhere to be found.  Murray all but disappeared from the record during this stretch of play.  In fact, some of his biographies claim he was never on the team at all!  The Enquirer never wrote about his disappearance and the SportsChannel broadcasts floating around on present day media sites never paid him any mind either.  Unfortunately, all broadcasts featuring Silverbacks era Murray seem to have been lost to time.  It seems if you wanted to witness the glow of a former U.S. star finishing their career in an indoor soccer league, you had to be there in person.  The end of Murray’s time in Cincinnati remains an unsolved mystery, for me at least.

So what happened to Bruce Murray?  Maybe there is some elaborate story of him quitting the team after the abysmal start.  Or, maybe the answer is much more straightforward.  Perhaps his long year of injuries forced him to finally call it quits.  Following his run with the Silverbacks, Murray disappeared from the spotlight.  He would return to soccer in 2001, coaching the Atlanta Silverbacks, a youth team in Georgia.  In 2011, he would join Cobi Jones, Eddie Pope, Earnie Stewart, and Bob Gansler in being elected into the National Soccer Hall of Fame.

Now in his late 50s, Murray lives a quiet life in Maryland.  In the past five years, he has begun to experience memory loss and confusion.  A doctor’s visit in 2020 and the resulting brain scan told him he likely suffered from CTE.  CTE is defined as chronic traumatic encephalopathy and is defined by the National Health Service as “a progressive brain condition thought to be caused by repeated blows to the head and repeated episodes of concussion” (NHS, 2019).  Throughout his career, Murray was known as a tough, hard-nosed player.  This led to him suffering countless concussions throughout his playing days, perhaps even leading to one in Cincinnati that would end his career.

CTE has gained recent attention as a result of criticism against the NFL’s player safety policies.  Today, Murray is speaking out about the dangers that soccer players face as well.  A recent CBS News interview gave Murray the spotlight to speak on the dangers of repeated heading of the ball and head injuries in youth soccer.  While the Silverbacks were destined to continue their inaugural season to an abysmal 14-26 record, Murray’s fate lay along a different path.  Many may have wanted Murray to continue to play for the new franchise, but he did what was best for himself.  Now speaking out about the dangers of head injuries in soccer, he serves as a reminder that at the end of the day, the athletes we root for are human too.  While his time in Cincinnati may have been brief, his legacy continues to remind us of the importance of empathy and advocacy in a new sports climate.  He was one of Cincinnati’s first internationally renowned stars.  A record breaker, a goal scorer, and a World Cup hero, but he was also human.

For more information about Bruce Murray and his CBS News interview click here.