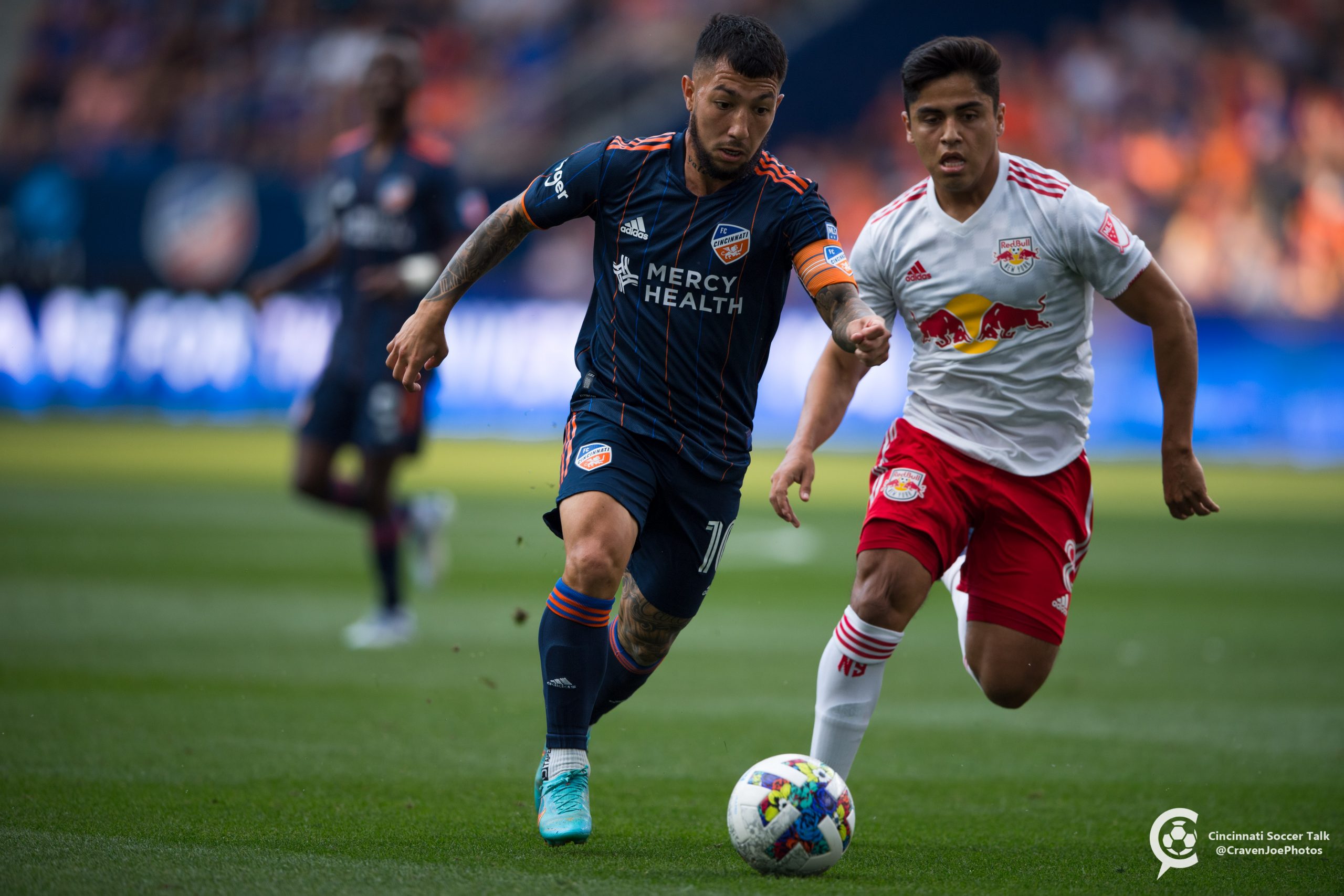 There’s an old Warner Brothers Cartoon where Wile E Coyote is having his usual hard time chasing the Road Runner. But this time Wile comes up with a trick that works and he actually gets his arms around the elusive bird. Problem is, Road Runner has gotten into some kind of chemical and is now a giant, 100 times the size of the perpetually-unfortunate Coyote. Wile holds up a sign to the audience saying something along the lines of “You’ve always wanted me to catch him, NOW what am I supposed to do?”

Following three years of futility and then a season-long high-intensity pursuit of playoff soccer, Pat Noonan and FC Cincinnati have finally caught the elusive prey and will face New York Red Bull Saturday at noon. It remains to be seen whether the team will flourish with this opportunity, or will find themselves daunted by the next level challenge that comes with postseason play.

Certainly, there is plenty of reason for this team and its supporters to be optimistic. The potency of the attack, featuring the front three of Luciano Acosta, Brenner and Brandon Vazquez has turned heads around the league. The statistical laurels and more personal accolades given to the team are many. Brenner and Vazquez tied for the team lead in goals with 18 (the first time in MLS history that a pair of teammates have each scored 18), while Acosta led all of MLS with 19 assists. Wingbacks Alvas Powell and Alvaro Barreal also come in for a share of the praise in making the FCC attack one to be respected.

Noonan, per comments distributed by the club to media, said the team’s confidence has been reflected in its preparation this week.

“We haven’t changed a whole lot of the routine and how we’ve gone about our meetings, how we’ve gone about training, certainly you know that it’s one and done now. But nothing’s really changed,” he said. “I think the energy and the mood around the group is better just because we’re a playoff team, and we get to go play a playoff game. And so that’s exciting, but not a whole lot has changed in terms of how we walk in the building and thinking we’re, you know, all of a sudden a different group, a better group. We continue to go about it the same way so that the focus and the preparation and the routine looks similar with the understanding that yeah, this is now a playoff game. And we need to be at our best if we want the season to continue.”

Red Bull and FCC have played to a pair of 1-1 draws this season, but the game at TQL Stadium was perhaps most remembered for the incident that saw Aaron Long goad Luciano Acosta into a quasi-head butt that got the Argentine playmaker sent off and subsequently suspended. RBNY is nothing else if not physical, with Noonan sharing some of those concerns to his team prior to the match.

“Those games are still relevant, there’s no question about it,” Noonan said. “I think there will be things that we’ve done ourselves, and that we’ll prepare for in terms of New York, that will probably play out in a similar fashion on Saturday. You know, certainly there’s always it’s a new game with little tweaks, whether it’s personnel, whether it’s shape, whether it’s just the fact that it’s a playoff game, and so the intensity is going to ramp up. There will be subtle differences. But I do think for both groups, there’ll be a lot of similarities from our regular season matchups.”

Mainstays in the RBNY (who finished four points ahead of FCC for the regular season) starting lineup include goalkeeper Carlos Coronel, defenders Sean Nealis and Aaron Long, midfielder Frankie Amaya and winger Lewis Morgan, who led the team this season with 14 goals.

Noonan recognized a number of his players don’t have much postseason experience, but he’s confident the group will not shrink away from the occasion now that they have managed to enter the rarified air of the postseason.

“It appears to be a motivated group. I don’t think they’re content with just being here,” he said. “The goal was to be here and now that we are, you know, let’s try to do something special. And that starts on Saturday. I think the mentality of the group and the way that guys are going about training and going about conversations on and off the field shows a group that’s focused and understands the challenge ahead, but I think is still very confident in being able to step on the field Saturday and have success.”