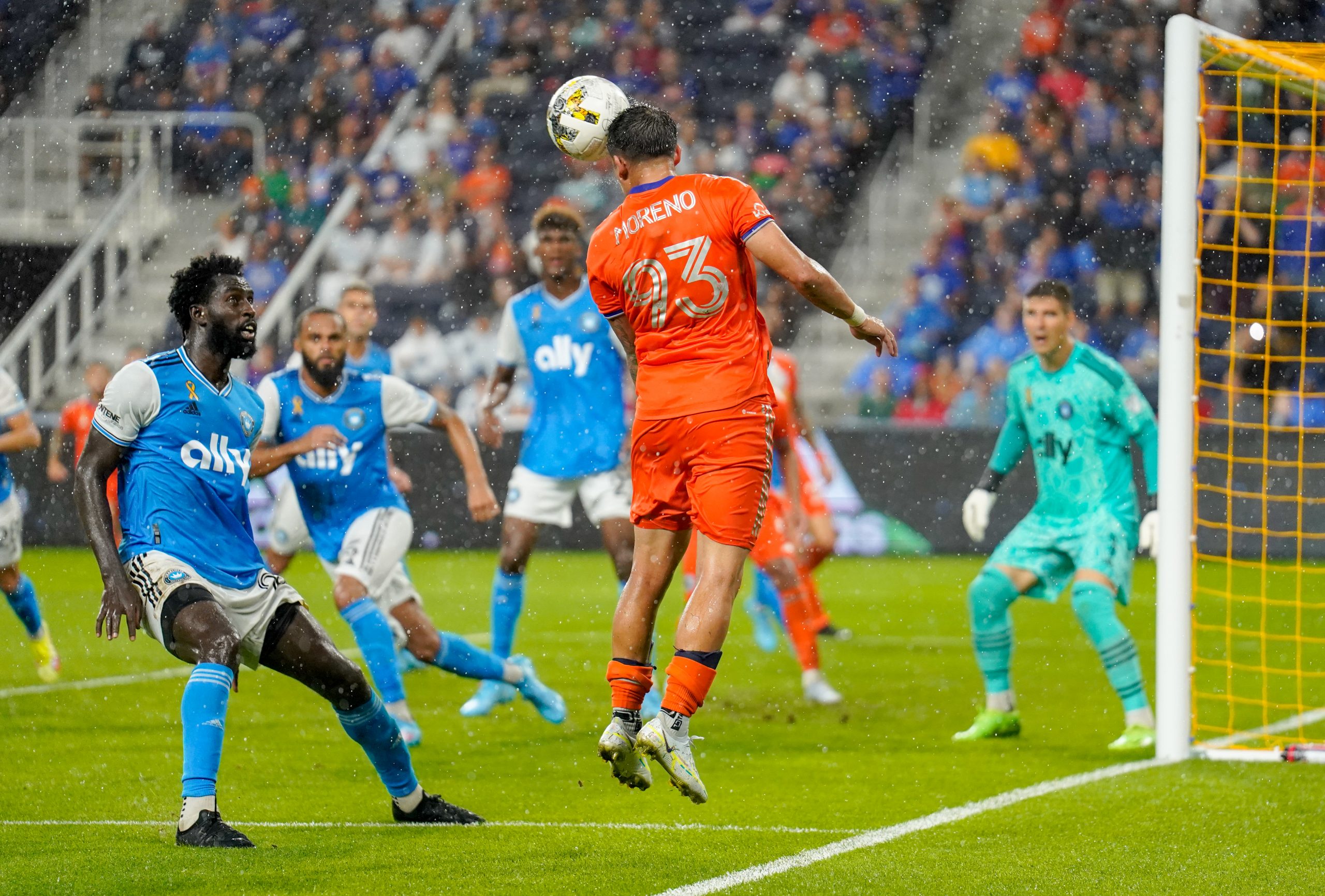 There wasn’t anything particularly pretty about FC Cincinnati’s 2-0 win over Charlotte FC last weekend. But for a team needing a win to stay in the Eastern Conference playoff conversation, taking all three points, no matter how ugly the match, was vital.

There wasn’t anything particularly pretty about FC Cincinnati’s 2-0 win over Charlotte FC last weekend. But for a team needing a win to stay in the Eastern Conference playoff conversation, taking all three points, no matter how ugly the match, was vital.

After the match, manager Pat Noonan said, “Wasn’t the prettiest on our side, in terms of the ideas with the ball and maintaining possession and being able to create. That wasn’t the game tonight. So, while that wasn’t there, I thought, for the most part, we defended really solid.”

FCC’s two goals, one scored on a set piece in the first half and the other coming directly from aggressive pressure high up the field past the 80th minute, were enough to seal the win. Defensively, the Orange and Blue limited Charlotte’s opportunities, conceding just 0.9 expected goals on 14 shots per Football Reference. Roman Celentano made just two saves and neither shot on target was particularly threatening. For all of Charlotte’s success moving the ball into FCC’s defensive third (23 final third entries for FCC to 46 for Charlotte), the final ball or sequence just wasn’t there. For all of Charlotte’s possession in the Orange and Blue’s defensive third, it ended the match with just one more touch in the opposing box (22 to 21).

FCC’s defensive shape forced Charlotte players wide in the attacking third, leading to lots and lots of crosses. Which, if you had to attack the trio of Nick Hagglund, Geoff Cameron, and Matt Miazga, might not be the best idea. FCC’s center backs combined to win 23 clearances on Saturday. 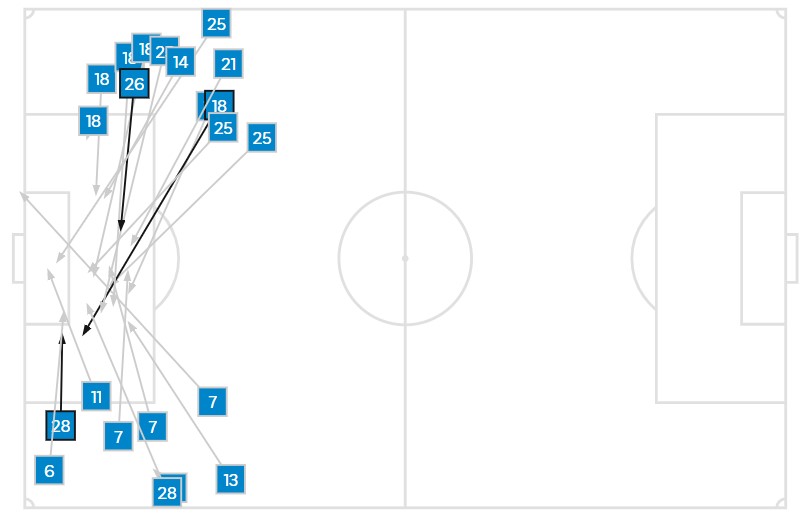 As Noonan noted, the Orange and Blue struggled to maintain possession. The weather probably played some role in that, with rain falling throughout the 90 minutes. FCC struggled to link play from back to front and its strikers struggled to find the game. There’s also probably a game state element to it, too. At halftime, FCC led 1-0 courtesy of Hagglund’s goal but was outshooting Charlotte 8-4 and had the only two on-target efforts of the game. Up a goal in the second half, FCC was content to cede even more of the ball and Charlotte didn’t take advantage.

Ultimately, on a night when both teams struggled to create good scoring opportunities, FCC did what it needed to do to win and stay above the playoff line. After seemingly weekly frustrations about missed opportunities, the Orange and Blue did what a playoff team should do: scrap out a result at home.

Quiet night from the strikers

FCC’s attack struggled, in part, due to quiet games from both starting strikers, Brandon Vazquez and Brenner. Against Charlotte, Vazquez and Brenner combined for 42 touches and zero shots. In his 14 minute appearance off the bench, Sergio Santos received four progressive passes – the same number as Vazquez in 88 minutes and one more than Brenner in his 76 minutes. The duo has been one of, if not the most, prolific and dangerous striker pairings in MLS this season. 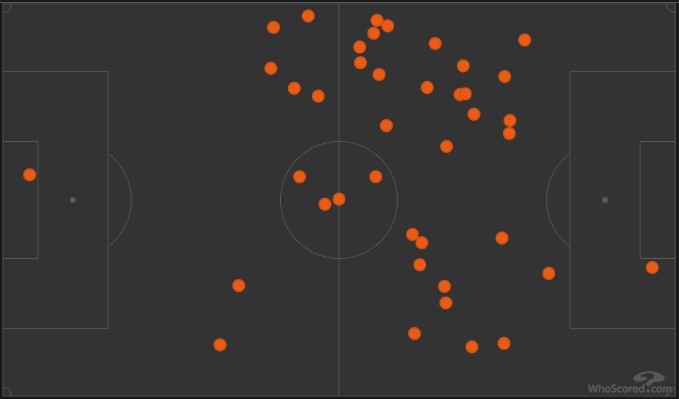 So what happened? Was it something Charlotte did or something the Orange and Blue didn’t do?

As noted above, the near-constant rain didn’t do any favors for either team but it seemed to impact FCC’s possession play throughout the match. Long passes that might normally be completed were mishit, shorter passes into tight windows were just a little bit off. Charlotte squeezed passing windows from FCC’s central midfielders too, pressuring Obi Nwobodo and Junior Moreno on 40% of their combined passes. The midfielders found Lucho Acosta with passes but struggled to connect with the strikers or each other. 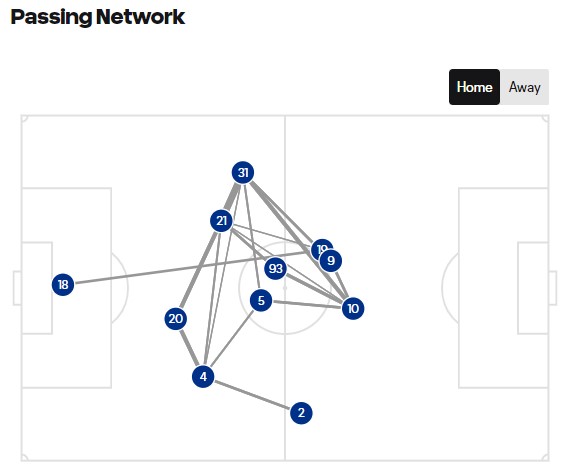 The conditions denied some of FCC’s ability to switch the ball quickly to wide areas. Just look how isolated Alvas Powell was in the team’s pass map. So the combination of Charlotte making it difficult to play through midfield and FCC’s inability to switch the ball quickly on a consistent basis left the strikers isolated. I don’t think there’s any reason for concern here, just a one-off situation when Vazquez and Brenner couldn’t get into the game like we’ve come to expect.

Although, tonight’s match against NYCFC will present its own set of challenges.

The Orange and Blue face a quick turnaround, facing NYCFC on the road in a New York baseball stadium (not the usual one, the other one). Though the Pigeons are in poor form, losing three straight and six of seven, FCC will be missing Lucho Acosta who is suspended due to yellow card accumulation.

Fitness after the short turnaround from this weekend depending, it seems likely that we’ll see Álvaro Barreal replace Acosta in midfield likely meaning a start for John Nelson at left wingback, and potentially a return for Rónald Matarrita off the bench.

It’s possible Noonan could roll out the 4-2-3-1 he went with against Columbus but given the chemistry and productivity between Brenner and Vazquez lately, excepting the Charlotte game, of course, and Barreal’s form of late, sticking with the 5-3-2 makes a good deal of sense.

Another thing to keep in mind going into the match tonight will be the field. The dimensions and the field at Yankee Stadium provide a, let’s say, unique environment for NYCFC at home and, despite this game happening at Citi Field, the feeling should be similar.

In his pre-match availability, Noonan said of Citi Field, “From everything we’ve gotten, it’s shorter dimensions, both width and length. So we’ll just make adjustments with tomorrow’s prep, as far as the size of the field, and go deal with the conditions. It’s more just making the players aware of it and being in the right frame of mind to go and play a game and not have excuses about the playing surface or the size.”

The Orange and Blue don’t really emphasize attacking from wide areas of the field, though dragging defenders wide and then exploiting space centrally is a key element of the offensive plan. I’ll be watching to see how Noonan sets the team up to deal with the irregular field tonight.

NYCFC is getting some key players back tonight though how much they’ll be able to contribute remains to be seen. At the beginning of the season, or even just a few months ago, this wouldn’t have been a game where the Orange and Blue might be expecting a result. However, given NYCFC’s struggles and FCC’s pretty good form, the possibility certainly looks brighter.