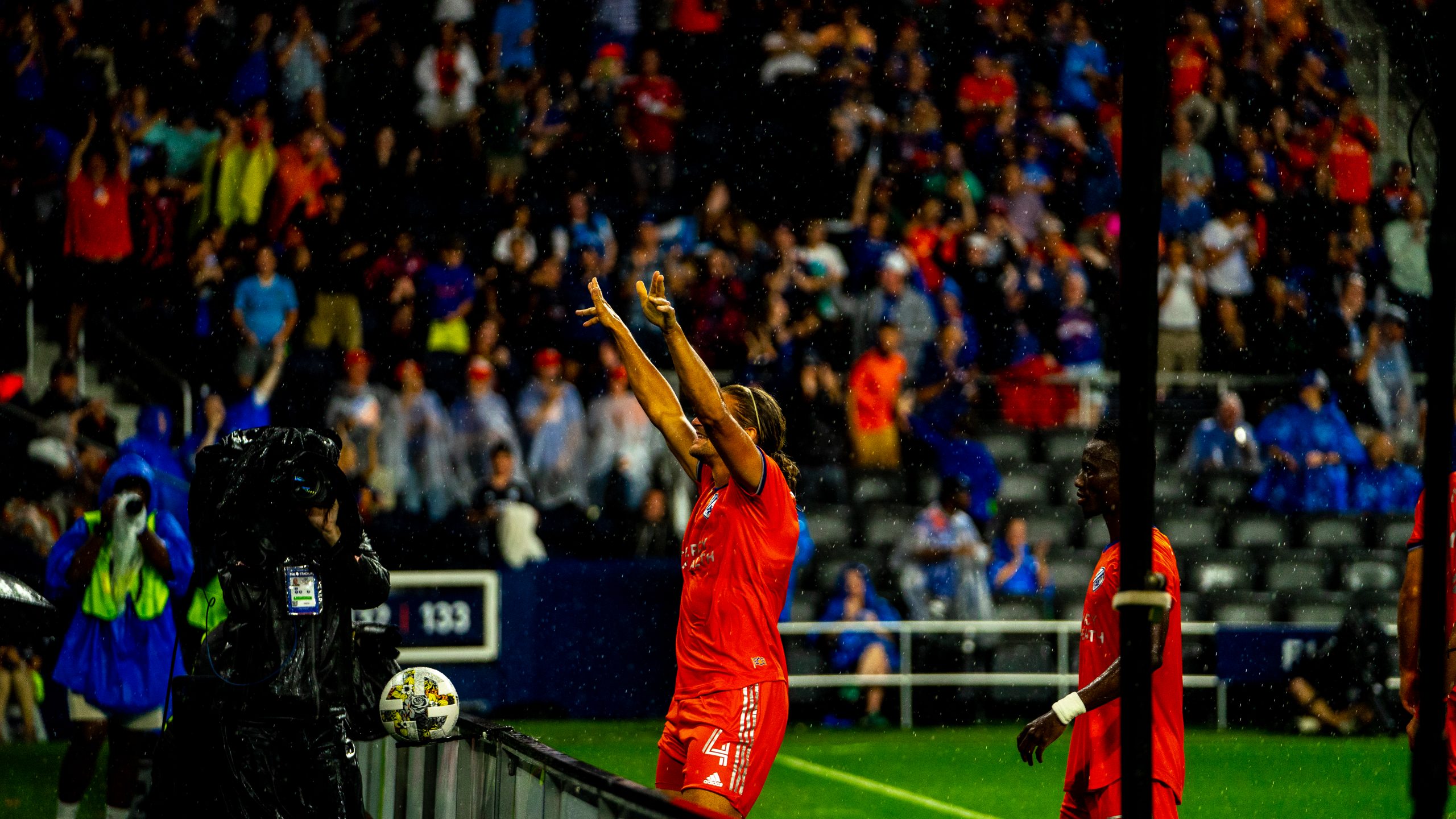 For at least one night, the reigning “Queen City” is in Ohio, as FC Cincinnati get their ninth win and fifth clean sheet of the season.

On a night when the rains tried to drown out the crowd, FC Cincinnati spoke louder than words. While the strikes were not necessarily thunderbolts, the Orange and Blue washed out their Queen City rivals to take a 2-0 victory against Charlotte FC at TQL Stadium.

FC Cincinnati (9-11-8, 38 pts.) entered the match needing a vital six-pointer against a playoff contender. Charlotte FC (10-2-17, 32 pts.) managed to make it competitive over 90 minutes but was ultimately not able to rattle the defense.

For the first time in many matches, FC Cincinnati had a solidly healthy lineup. Midfielder Obinna Nwobodo reentered the Starting XI after serving a yellow-card suspension. That was the only real change in the roster—left back Ronald Matarrita had returned to practice months after ankle surgery but was held out of the lineup as a precaution.

Charlotte’s lineup was shaken up to present a boost from the bench. Forward Karol Swiderski, who punished FC Cincinnati with a brace in a 2-0 home win earlier in the season, sat on the bench to start. Defenders Jaylin Lindsey and Christian Fuchs were both held out of the lineup and did not enter the game.

The first 30 minutes of the first half did not produce much offense or drama, only buckets of rain. Charlotte owned more of the possession, only for their advances to be clipped short. The deepest threat came from a 23rd minute free kick and rebound that was blocked both times by Nwobodo.

The proverbial floodgates finally opened for FC Cincinnati late in the first half. In the 38th minute, Nick Hagglund got a knee on Luciano Acosta’s corner kick to skirt a shot past goalkeeper Kristijan Kahlina. Hagglund’s first goal of the year gave the Orange and Blue a 1-0 lead they would hold until halftime.

Hagglund, who promised to cut his hair for charity after the match, praised the set piece’s formation and execution. “It feels so good, it’s been too long. Me and Matt (Miazga) have had some success working off each other. I went near post, and the gap opened up for me. Just put my body on the line and got whatever I could get. I was close enough to the goal where anything could put it in.”

While FC Cincinnati struggled to get possession in the first 45 minutes (42% to Charlotte’s 58%), the flow of offense swung in their favor at the end of the half. FCC managed only one shot in the first 30 minutes. The team took seven shots in the final 15, including the game winner.

The pressure to win a vital three points was visible in Charlotte’s frantic play to start the second half. Forward Kamil Jozwiak had Charlotte’s two lone shots on goal in the 53rd and 65th minute, but goalkeeper Roman Celentano claimed both for his two saves in the evening.

While Charlotte managed 10 shots in the second half, six were blocked by the defending back line, who arguably played their best game of the season. Defenders Matt Miazga, Geoff Cameron, and Alvaro Barreal claimed seven of Cincinnati’s 10 blocks to preserve FC Cincinnati’s fifth clean sheet of the season.

With Charlotte flexing much of their offense earlier in the second half, FC Cincinnati took the late advantage to salt the win away. In the 81st minute, midfielder Yuya Kubo challenged Nuno Santos deep in the Charlotte end to deflect a pass to Acosta. The Cincinnati captain laced a left-footed shot past the recoiling defense to make the score 2-0 and seal the win. The goal is Acosta’s seventh of the season.

Head Coach Pat Noonan noted that this game felt different after weeks of draws and late equalizers. “Early on in the week, it was ‘How are we going to respond?’, and I thought our first day of training back (after the Columbus draw) was outstanding. That kind of set the tone—this is the character of the group. They’re ready to get back to work and try to right the ship. A lot of credit to them for their response.”

This 2-0 victory was the first clean sheet for FC Cincinnati since their 1-0 win over Orlando in June, but according to Hagglund, the win is what counts.

While the win was a net positive, FC Cincinnati might be without a vital cog for their next match. Acosta picked up a late yellow card in stoppage time and will miss the match against New York City FC on Wednesday.

FC Cincinnati moves ahead of the playoff line and sits in seventh place for at least one day. Charlotte FC’s loss keeps the expansion team in 12th place, six points behind the playoff line with five matches left.