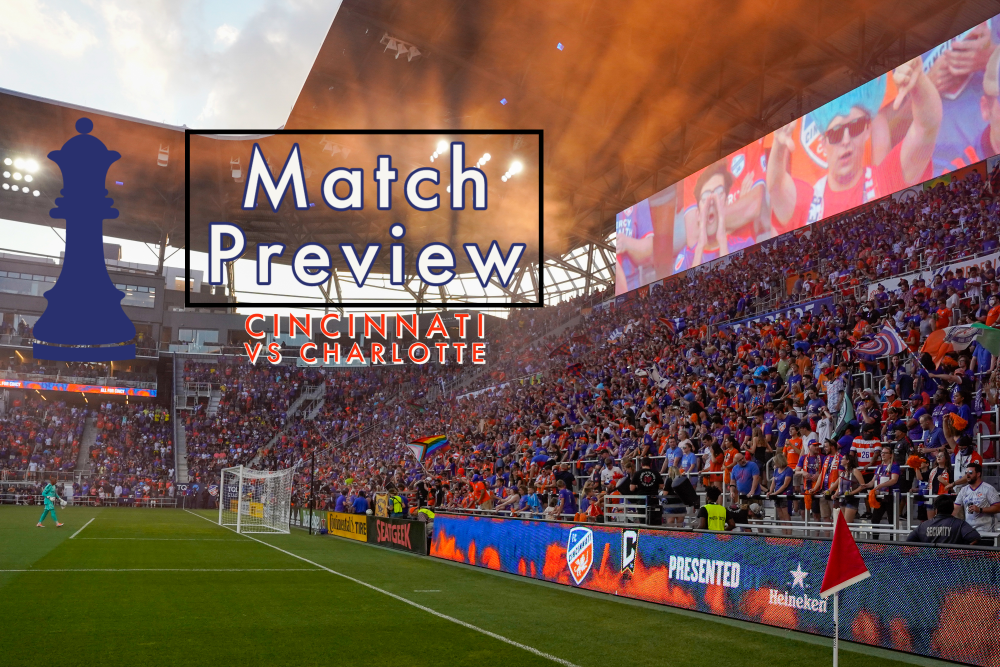 After experiencing the gut punch of gut punches last weekend vs. Columbus, Pat Noonan’s FC Cincinnati side still finds themselves in the midst of a playoff chase.

Saturday the Orange and Blue find themselves at home again, hosting Charlotte FC. While “must-win” tends to be overused in the lexicons of soccer supporters, the home match against the expansion team drifts fairly close to that definition.

Charlotte is only 3 points behind FCC in the Eastern Conference table but picked up a 2-0 win over the Orange and Blue in Charlotte back in March.  FCC is one point behind Miami for the 7th and final playoff berth, but with at least seven teams (including Charlotte) battling for the final two qualifying spots. The final seven league matches are sure to bring more twists and turns, including to the stomachs of the FCC faithful.

It’s hard to imagine a bigger disappointment than the conclusion of last weekend’s Hell is Real rivalry game, with Columbus equalizing on virtually the final kick of the game. But that late goal and a number of other late strikes conceded over the course of the season have been a severe impediment to FCC’s playoff chances.

Noonan knows his team will need to do a better job of defending late leads as the season progresses. In comments distributed by the club to the media, he shared how he addressed the matter with his team during training this week.

“We compared to some other matches where we were seeing out games and the challenges of defending deep,” he said. And I don’t want to say going into protect mode, but just trying to keep everything in front of us. But how do we do that in a more efficient way? And so in this particular game, it was how do we close the ball and, and make things a little bit more predictable, so that we could get more pressure to eliminate crosses into the box and have to deal with those aerial duels with the second balls.”

He added that despite the dropping of points, the team still has every opportunity to qualify for postseason play.

Some welcome news for the home team this week is the return of Costa Rican left back Ronald Matarrita to full training, following his ankle injury suffered in March. Saturday may mark the return of Matarrita to the matchday squad, with Noonan saying his player has looked sharp. Caution toward a player who has been out for so long will still be present in Noonan-s decision-making.

“He’s available for selection, we’ll just be smart about taking it day-by-day,” Noonan said. “Really, that’s how we’ll approach it, just to make sure that each day there’s good dialogue to see how he feels, what the body feels like, how he recovers, to make sure we’re making the right decisions each day, putting the game day aside, so that the progression is gone about in the right way.”

Noonan said Charlotte will make it difficult for FCC to attack, adding that the expansion team also poses a threat on the counter-attack.

“I think it’s going to be a team that’s going to be challenging to break down. We need to be good in how we move the ball to create space,” he said. “And we also need to be smart about how we go forward so that we’re not opening ourselves up in transitions. Because I think they have some players that can get out with speed and hurt us. It’ll be a challenging game based on just the opponent, but also just what we’re both fighting for.”

Karol Swiderski is the leading scorer for the visitors, the Polish DP tallying eight goals so far in his first MLS season (including two vs FCC in the previous match between the clubs).