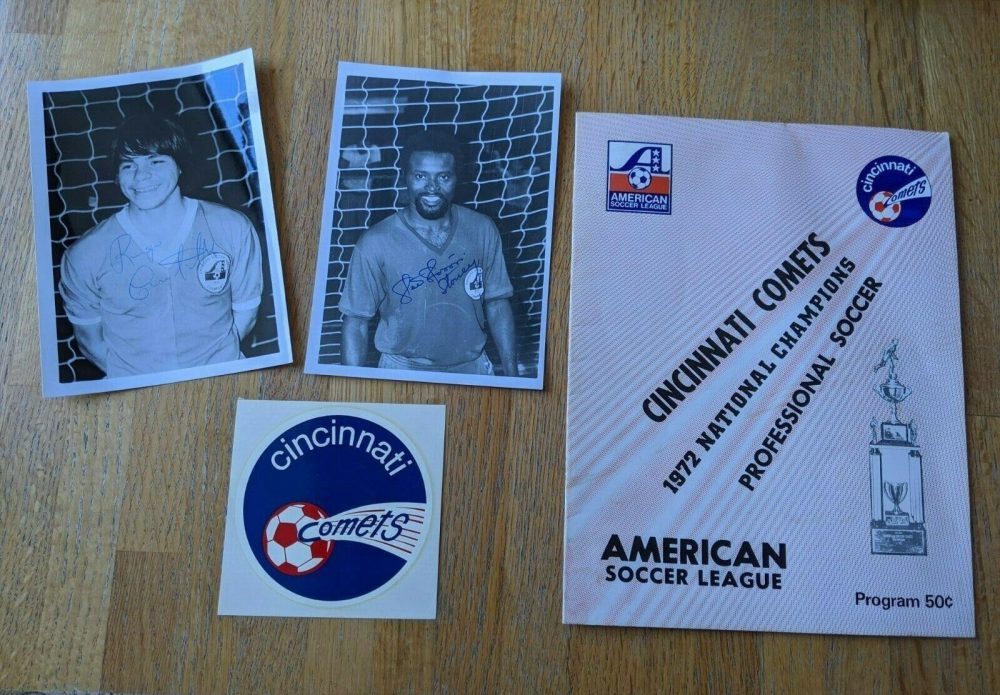 The Cincinnati Comets had a short but eventful run

To many Cincinnati sports fans, the year 1972 is remembered for the Reds’ postseason run culminating in a World Series defeat at the hands of the Oakland Athletics. However, some Cincinnati soccer fans may remember the inaugural season of the Cincinnati Comets which occurred in the same year. The Comets played as members of the American Soccer League (ASL), the second tier of soccer in the United States. As the team headed into August, they sat at the top of the table having yet to lose a game. Many around the city wondered whether the team coached by Dr. Nick Capurro could bring football home to the Queen City by winning the ASL Championship.

The first August test for the Comets came when team members faced suspension for violent conduct displayed against members of their dreaded rival, the St. Louis Frogs. This violent conduct displayed by the Comets was no mere arm grab.  Instead, Frogs and Comets players had gotten into a full on brawl two weeks prior in St. Louis which resulted in three players from both sides being suspended for their next match. The instigating team of the brawl was unknown but, given the nature of teams from St. Louis, I think we all know who engaged first. Who were the Comets playing in their next match you might ask? Ironically, the St. Louis Frogs. The rematch saw Dr. Nick Capurro take precautionary measures by refusing to allow any of his suspended players to sit anywhere near the bench. Whether or not the players were put up in the 1972 era Pitch View or Tunnel Club remains unknown. Despite the suspensions, the Comets would go on to win the match 3-0 and continue their unbeaten season.

Days after the St. Louis victory the Comets would bolster their attack with the addition of Brazilian left-winger Diogo and Argentine midfielder Roberto Aguirre. The two joined the Comets on loan from North American Soccer League (NASL) side Miami Gatos. A buzz began in the Comets community around these players that were “known throughout South America”. Local media especially made note of the significance of Diogo, specifically calling attention to his one name. This process would repeat itself when Brazilian striker Brenner would join FC Cincinnati close to 50 years later. Still, the question remained: would these players be able to give Cincinnati the push they needed to win the ASL Championship?

Diogo and Aguirre would make their first appearance for the Comets against the Ohio Amateur All-Stars in a friendly benefit match at Western Hills High School Field. The match drew 5000 fans and was a clear attempt to capture the interest of the local youth soccer community. The annual benefit event would continue to be a major success for the organization and would continue in years to follow. The 1972 iteration saw Diogo bag his first goal for the club in a 7-3 win over the All-Stars. The Brazilian scored what would’ve today been affectionately dubbed a “banger” from 30 yards out.  In only his first match Diogo was proving to be a valuable addition to the already strong Comets squad.

Diogo’s goal in the benefit game would prove to impress his new coach who claimed that the new Comets attack was, “the best we’ve ever had.” The next challenge for the 5-0-1 Comets in league play would be against the 2-2-2 Detroit Mustangs.  The Comets could clinch the Midwest Division title with a win against Detroit at their home field of St. Xavier High School Stadium. However, the Mustangs remained the only team that the Comets had not beaten in 1972. The two sides played to a draw earlier in the season, the only time Cincinnati had dropped points all season. The match would ultimately result in a 4-1 victory for the home side, sealing the Midwest Championship for Cincinnati. The headline in the Enquirer the following day read, “Silent Comets Capture Midwest Title”, not the headline that one would expect following a championship season. The story reveals that while the Comets had won their championship, the reporters and players were unable to communicate with each other due to an extreme language barrier. Instead, the reporters had to rely on the silent emotions that the players displayed following the match. With the reporters not being able to understand the players and the players not being able to understand their own teammates all that was left was silent smiles on the field following the win. All in all, the event made for an awkward story on the Sunday sports page.

Nevertheless, the Comets had clinched the Midwest title and booked their ticket to the ASL playoffs. The last game of the season before the playoffs was against the Cleveland Stars. Leading up to the game, many stories focused on the artificial turf field that the Comets would play on in Cleveland. Would this prove to be a challenge for the undefeated team? The Comets spent the week prior to the game practicing at Nippert Stadium to get used to an artificial surface. Ultimately, the turf monster proved to be too much for the Comets and the shooting stars’ undefeated season crashed and burned after the Stars handed them a 3-0 defeat. Headlines the following day credited the turf with ruining the Comets’ undefeated season.

Despite losing in the final game, the Comets returned to form in the ASL playoffs.  The strange playoff system of the ASL saw the Comets receive the coveted two round bye. Instead of having to play in the first two rounds against victors from the North and South conferences, the Comets received a one-way ticket straight to the ASL Championship. These odd rules benefitted the Comets and could leave one wondering whether or not the Comets were the 1972 equivalent of MLS’ current big market teams.

Tragedy struck the Comets when three of their players were involved in a car accident the week of the Championship game. The players’ injuries prevented them from competing in the final match of the playoffs. Despite this loss, the Comets would go on to win the ASL Championship game against the Philadelphia Spartans thanks to a 54th-minute winner by University of Cincinnati student Charley Roberts. The game began amidst a panic as starting Comets goalkeeper Augusto Quesada forgot his jersey and had to rush home. The goalkeeper was eventually subbed on after returning in the proper gear.

The win on September 9, 1972, brought the Comets their first Championship in as many years and cemented them amidst the history of Cincinnati sports. However, the future for the Comets was not as bright as they may have hoped. In 1973 the Comets would make Nippert Stadium their home field. They would go on to win another Midwest title but ultimately fall in the ASL Championship to the New York Apollo. The year 1973 also saw Comets player Ed Roberts attempt to join the Cincinnati Bengals as a place kicker. In the years following, the Comets would never again recapture their former glory, failing to win a title in both 1974 and 1975. A failed NASL bid in 1975 forced the Comets to fold and another Cincinnati soccer team was lost to history.

The Comets 1972 run was a story I had not heard before, but one which I instantly became captivated by. The team’s professional nature and winning culture mixed with antics such as the uniform debacle proved to be exciting to research.  While the Comets existed in their own era, there are many similarities to the modern day FC Cincinnati squad. Both franchises knew that they had to capitalize on the city’s vibrant youth soccer culture. Both brought world renowned talent to the Queen City, increasing the city’s diversity and growing its culture – even though the Comets could’ve perhaps done better in hiring a translator for the team. Finally, both brought exciting, championship winning soccer to the city, growing the game we love in the city we love. FC Cincinnati owes a lot of credit to teams like the Comets that dared to try soccer in Cincinnati. The successes proved it was possible and the failures proved there was still much to learn if a professional side wanted to exist in this market. Today, we see FC Cincinnati draw capacity crowds that are 26,000 instead of 5000, a testament to the progress of the sport in our city. They say history repeats itself and with an American-Brazilian-Argentine attacking trio of our own, one is left to wonder if we could be on the precipice of another championship. The year 2022 is the 50th anniversary of the Comets’ dominant run. Could the stars – or rather the Comets – align for FC Cincinnati at the end of this year?  Only time will tell.

We are not the first site to write about the Comets. For more history check out the work from friends of CST Ronnie Salerno and Cincy Shirts.

Ronnie also talks about the Comets in Episode 29: of Good Seats Still Available

WCPO did a video feature here:

If you want to see more articles like this please let us know at feedback@cincinnatisoccertalk.com or support us here