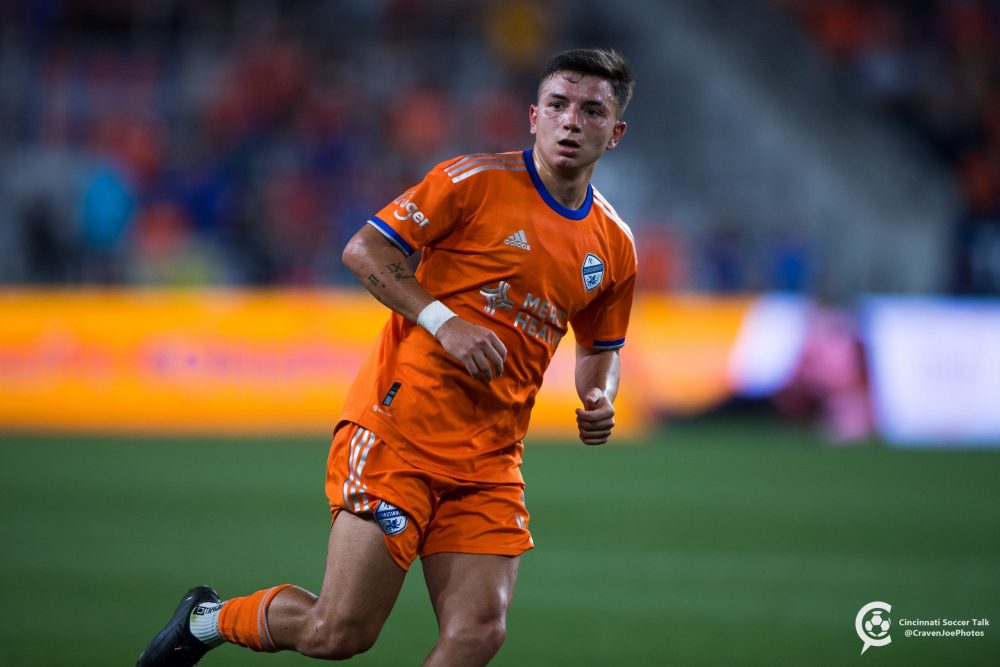 Rivalry games bring an extra edge no matter when they are played, but for FC Cincinnati’s Sunday visit to Columbus for the latest edition of the Hell is Real showdown with the Crew, circumstances will definitely lend even more tension to the team when it takes the field.

Pat Noonan’s team is on a six-match unbeaten string, but also has drawn four consecutive matches. Most recently a 2-2 deadlock in what has to be viewed as a very winnable game Wednesday at home vs. Vancouver. Conceding a late equalizer vs. the Whitecaps cast a bit of a pall over the team prior to the rivalry match. The shadow got darker Friday with the news that FCC standout attacking player Luciano Acosta will serve an additional two-match suspension for his actions at the end of the New York Red Bulls match last weekend. Acosta was sent off for violent conduct following a clash with NYRB’s Aaron Long (forcing Acosta out of the lineup for the Vancouver match). The suspension stems from the FCC captain’s angry confrontation with the match referee, which included physical contact.

So a team already missing starting midfielder Junior Moreno, forward Dominque Badji, and left back Ronald Matarrita to injury, now must face its top rival and a fellow Eastern Conference contender for a playoff berth without its only MLS All-Star. Acosta’s 6 goals and 10 assists so far this season only tell part of the story as to his importance to the Orange and Blue resurgence this year.

Adding to that walls-closing-in feeling, new acquisition Sergio Santos, brought in to provide attacking depth for FCC, went down injured in his first appearance for the club Wednesday and is a significant doubt for Sunday’s game. The team was already in a thick series of matches before seeing the roster get shorter through these events.

These concerns for FCC, like Hell, are very real. But Noonan and company have exhibited nothing this season if not fighting spirit in building an unexpected playoff challenge in the head coach’s first season in Cincinnati.  In his comments distributed by the club to local media, Noonan painted a picture of a team motivated, rather than bedraggled, by the adversity.

“So, we had a good conversation about it, and talked through the video from the (Vancouver) game, and I think everybody understands the disappointment and where we could have been better. I think each of them is ready to be back on the field in a meaningful game to kind of right the wrongs,” Noonan said. “I think that the demeanor of the group is one of frustration, but also of the understanding that we don’t have time to feel sorry for ourselves or point fingers. We have to, to make sure that every one of us is in the right mental space to turn things around quickly and have a strong performance in an important game.”

Sunday will be Noonan’s first local rivalry match with the Crew, but he understands the dynamic of such a game and how that needs to inform his team’s approach.

“So we need to understand the importance of the game as players, as coaches, and making sure that one, our reaction is the right one from our previous game, but also, when we step on the field, and we go out to compete, we do it in a way where we show our club and our fans the importance of this game to them who have experienced it for a longer period of time, then a lot of us have that have just joined the club,” he said. “What I know is that from those (previous rivalry) experiences and understanding the importance of having the right mentality that a lot of times supersedes the X’s and O’s of the of that particular game. You have to be ready to compete, and show in every moment that we understand the importance of this game. So I’m excited to see our guys go out and compete. We know we have a very difficult opponent, and it’ll be a great environment.”

The season for Columbus has been a bit inconsistent, including a four-match winless streak (not including a U.S. Open Cup defeat to Detroit), followed by an ongoing string of seven matches without a loss (four draws, three wins, longest current streak in MLS).

The main buzz around the team is about new DP signing Cucho, a Colombian international who has transferred from the English side Watford for a club-record fee. He’s played 73 minutes over two matches and already scored three goals. Other mainstays in the lineup for Caleb Porter’s team include midfielders Derrick Etienne, Darlington Nagbe, and Pedro Santos, defenders Jonathan Mensah, Milos Degenek and Josh Williams (set to make his 150th league start for the hosts), forwards Lucas Zelarayan and Miguel Berry and Goalkeeper Eloy Room.

Noonan expects a tough encounter and one that his team will respond well to.

“I think our guys will embrace stepping on the field against a good opponent in a tough environment, and showing that they’re ready to compete,” Noonan said. “But competing also can only get you so far. You have to have quality on the day, we have to be pretty secure with the ball moments that don’t allow them to get in transition, go into goal, because that’s where those players are the most dangerous.”