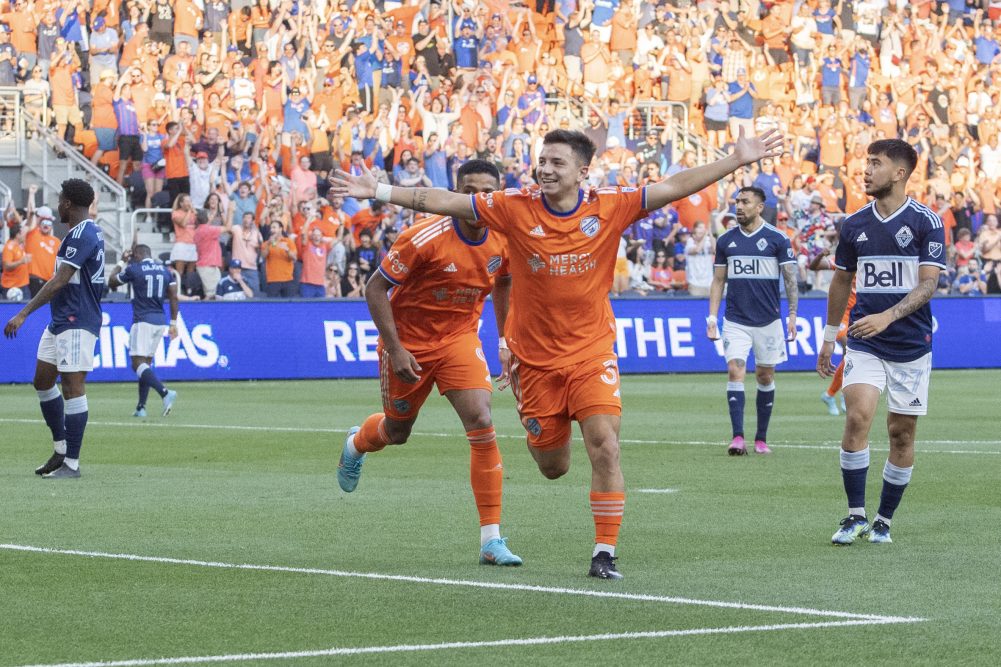 That makes four straight draws for the Orange & Blue, who stumbled twice against Vancouver at TQL Stadium.

If the average fan looks at the half-full glass, they’ll point out that has been some time since FC Cincinnati has lost at home—a 3-2 loss in May against New England. However, the wins also have been hard to come by, evident in their 2-2 draw against Vancouver Whitecaps FC.

FC Cincinnati (7-6-7, 27 pts.) has enjoyed a good stretch of positive results. On the flip side, they were unable to close the door twice when needed and gave up equalizers from lapses in defense. Vancouver (7-4-9, 25 pts.) limped their way to two well-deserved transition goals to share the points.

FC Cincinnati’s lineup had significant holes for this midweek matchup. A solid 1-1 draw against New York Red Bulls on Saturday kept FCC above the playoff line, but midfielders Luciano Acosta and Allan Cruz both racked up red cards, forcing them to miss the match. Yuya Kubo and John Nelson slotted into the starting lineup, with Alvaro Barreal taking the #10 role for Acosta.

Dom Badji, Junior Moreno, and Alec Kann also missed another game due to health concerns, while Alvas Powell and Calvin Harris were working to return from personal matters. However, Sergio Santos made his first appearance in the Orange & Blue, starting on the bench.

Vancouver came into the match with multiple players not making the trip to the Queen City. The ‘Caps lost at home on Friday against Minnesota United FC, 3-1. Designated Player Andres Cubas left the match early with an abductor injury and was ruled out for the match against FCC. Seven other players did not travel, and the lineup announcements ruled out a total of nine.

The game started with both teams trading quick scores on their first shots. In the 3rd minute, Brenner fed Barreal in the center of the box, and the Argentinian scored his third goal of the MLS season for a 1-0 lead.

Vancouver equalized with a fortunate bounce on the grass. In the 5th minute, Ray Gaddis failed to out-jump his opponent in the box. Forward Cristian Dajome centered his pass to Ryan Gauld, who tapped in his third goal of the season.

Brenner once again played a key role in the second goal, feeding Brandon Vazquez in the box in the 23rd minute. Vazquez’s right-footed shot skirted past Cropper for his 10th flapjack of the season.

FCC took more of the advantage late in the first half, ruling the possession numbers (62/38) and shots (7/4) at halftime. Vancouver’s thin squad became thinner before and at halftime. A collision between Cropper and defender Devain Brown in the 32nd minute forced both Brown and Cropper off the pitch with concussions by halftime.

The second half started in FCC’s favor, as possession led to confidence, but the whistles didn’t go their way. The team shouted for a penalty in the 58th minute after Brenner went down at the edge of the box, but nothing was given. Sergio Santos made his debut in the 74th minute, only to play limited time, pulling up late in the half with a leg injury.

Vancouver’s substitution patterns and transitional play finally paid dividends late in the game. In the 82nd minute, Dajome played a pass from Tosaint Ricketts to speed a right-footed shot past Celentano. The 2-2 result would last through some rain-soaked final minutes, another draw that felt like an escaped win.

The frustration was quite palpable. “That’s about as frustrating a result as we’ve had,” Pat Noonan mentioned after the game. “Just as far as how the game played out, playing with the lead in the second half and having numerous chances to get the third goal and put the game out of reach. Too many transitional moments to secure three points.”

“After tying four or five games recently, it is very frustrating,” Brandon Vazquez said to the media afterwards. “Giving up the lead, it’s not a good feeling, especially when we know we’ve outplayed the other team. It’s just frustrating, but at this point, you just turn the page and focus on Columbus for Sunday.”

FC Cincinnati remains in 6th place in the Eastern Conference, while Vancouver stands in 10th in the West.

FCC, fortunately, does not have to leave the state during this congested week, facing Columbus Crew SC in this season’s first “Hell Is Real” Derby on Sunday. Vancouver is not so lucky, as they need another long-distance flight to face the Portland Timbers on Sunday.