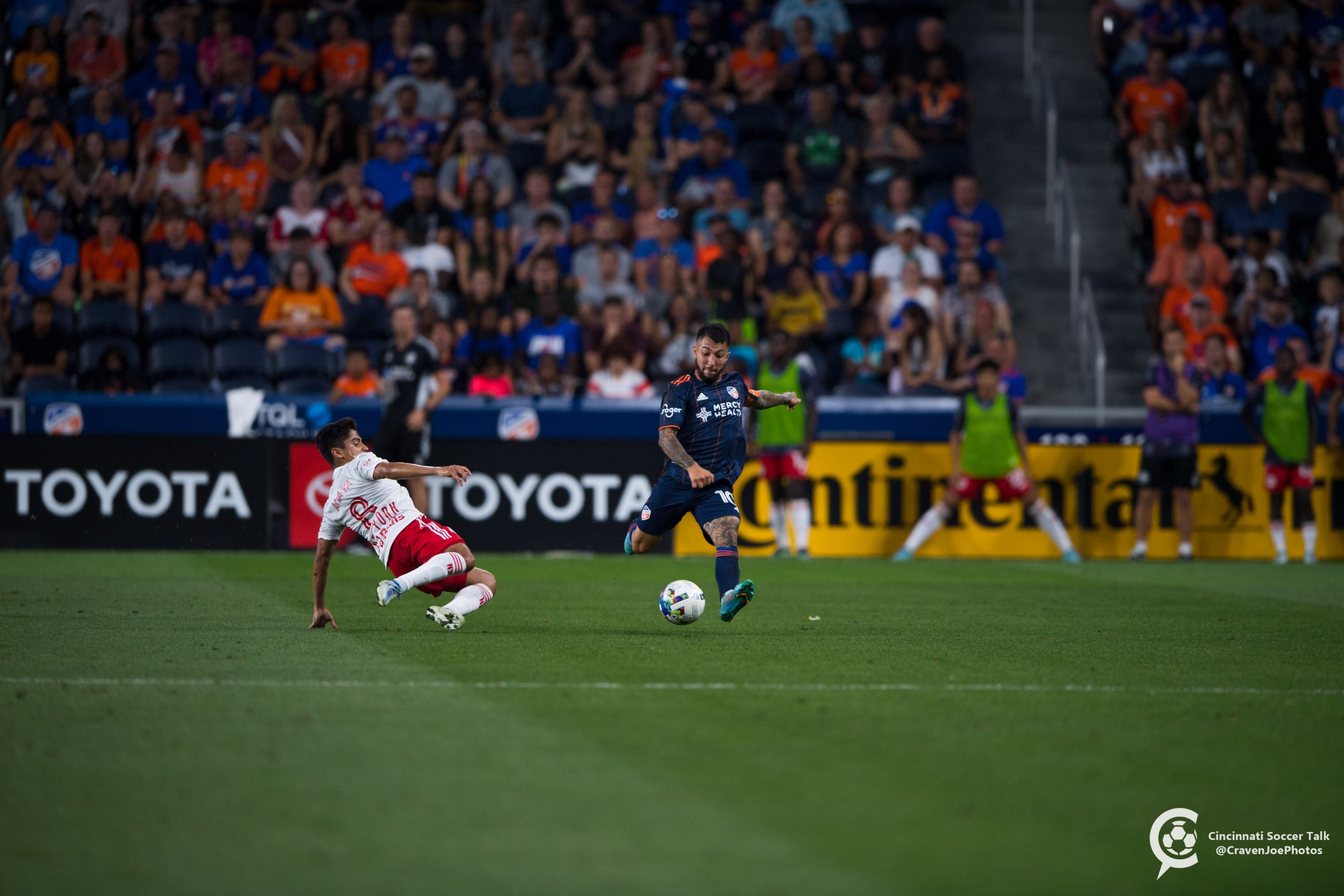 Thrown off their groove, FCC can learn to adapt

FC Cincinnati continued to pick up points against the best teams in the east after a 1-1 draw with the New York Red Bulls. In a contentious match, the Orange and Blue limited NYRB going forward. The Red Bulls struggled offensively. Even after Allan Cruz’s second yellow card left FCC with ten players, NYRB managed just three shots worth a total of 0.19 xG. Except for the (dubious) first-half penalty, Roman Celentano was rarely threatened in goal.

Going forward, FCC got caught in NYRB’s preferred game. At times, FCC played too slow, allowing the Red Bulls’ aggressive pressure to catch up. Pressure brought in fouls or turnovers in midfield. When FCC could play fast and connect forward passes, the Orange and Blue created danger. Brandon Vazquez’s goal came after a well-timed run and a perfect through ball from Lucho Acosta on the edge of the 18-yard-box. The issue throughout the game was getting Acosta and FCC’s other attackers in positions to create danger. NYRB’s game plan limited those opportunities.

FCC has thrived this season when Acosta can get on the ball in the final third of the field. The Red Bulls’ high line and aggressive style compacted the game in midfield and didn’t allow the Orange and Blue time or space to find Brenner or Vazquez in more advanced areas of the field. FCC’s strikers are usually reliable outlets for progressive passes, but on Saturday, they combined to receive just eight progressive passes.

Acosta was the main outlet for progressive passes on Saturday, and unlike many games this season, he received the ball in midfield rather than the final third. Look at the heatmaps of where Acosta usually receives passes. The map on the left shows passes received for the first 18 games of the season. On the right is Acosta’s pass reception heatmap on Saturday.

Acosta was pushed deeper into midfield to find the ball and the Red Bulls’ preferred style of play meant he usually didn’t have time or space to find the next pass. That pressure led to turnovers, 50-50s, and fouls in midfield and prevented FCC’s talisman from getting into a rhythm. Gerhard Struber (ironically, in my view) used his postgame press conference, in part, to complain about Luquinhas not being protected by the referees. Lucho Acosta certainly wasn’t either. Red Bull players made life difficult for Acosta throughout the match, officially fouling him four times (compared to Luquinhas’ five) and pressured 10 of his 29 live pass attempts, most on the team.

As cynical and hard to watch as it can at times, the Red Bulls’ system often works. Here’s a map from MLS showing ball recoveries and fouls committed on Saturday by NYRB. Clearly, the midfield pressure led to lots of changes of possession and, when the Red Bulls didn’t win the ball back, a foul in midfield broke the game up and allowed its defense to regroup. 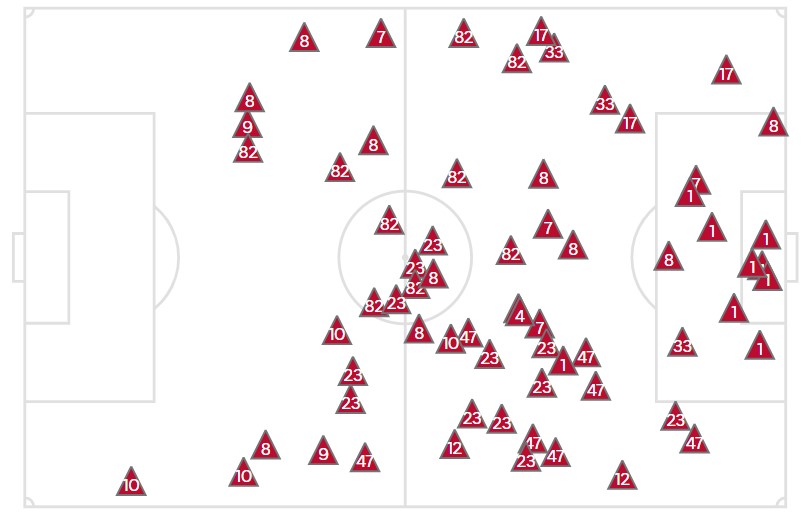 FCC has gotten through a difficult part of the schedule after the June international break. Sure, there were opportunities to rack up more points, including Saturday, but to get through consecutive games against the best in the Eastern Conference is a good sign. Luckily for the Orange and Blue, few (if any), MLS teams execute a press like the Red Bulls. Responding to that style isn’t something that will indicate how the rest of this season will play out. Hopefully, FCC will take lessons from Saturday’s draw for its return trip to New Jersey next month.

The Orange and Blue have a short turnaround with a midweek game against Vancouver should give the Orange and Blue the opportunity to get back to winning ways, even without Acosta. And, this coming Saturday, looms the specter of the first Hell is Real derby game of 2022.  We can hope that FCC took some lessons about playing in an emotional game from Saturday, too, and will be ready to deal with a hostile atmosphere in Columbus this weekend.