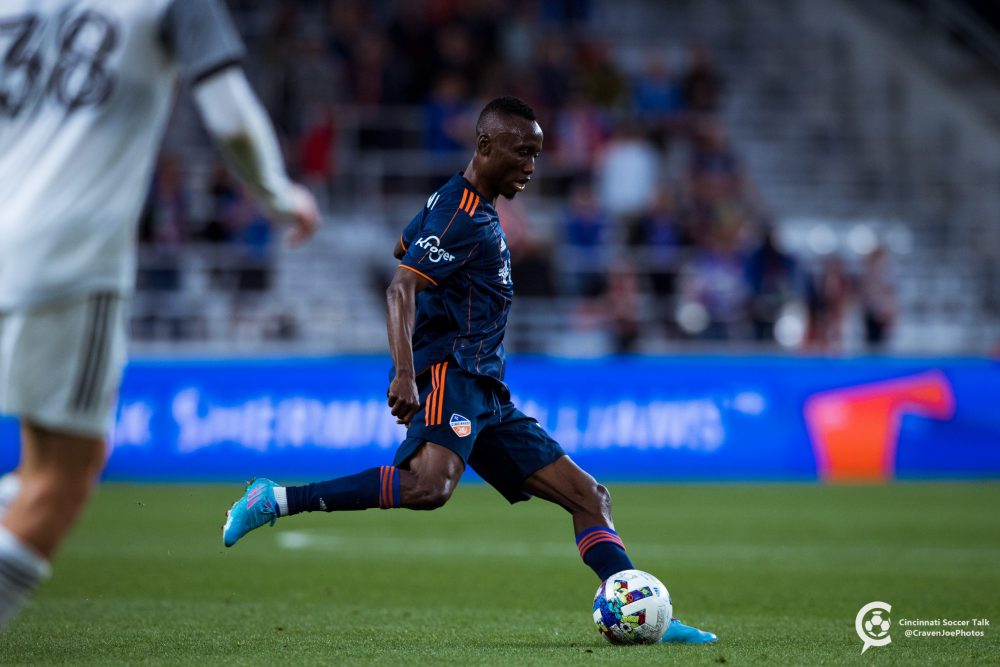 Obi has impacted the way FC Cincinnati press. Nate breaks it down

When Chris Albright made the hiring of Pat Noonan as FC Cincinnati’s manager official in the offseason, there was an expectation from many (including me!) that the Orange and Blue would, in many ways, look to emulate the style of the Philadelphia Union. Albright’s tenure in the Union’s front office and Noonan’s time as a top assistant to Jim Curtain made the projection almost too easy. A major element of the Union’s playstyle is its aggressive pressure.

Using aggressive pressing up the field to generate turnovers leading to scoring opportunities was an element of Noonan’s plan going into the season. And it showed. Early in the 2022 season, a high portion of FCC’s pressures occurred in the attacking third of the field. However, as the season has progressed, FCC has pressed opponents high up the field less and less. In three of the last four matches, less than 20% of FCC’s pressures came in its attacking third of the field. 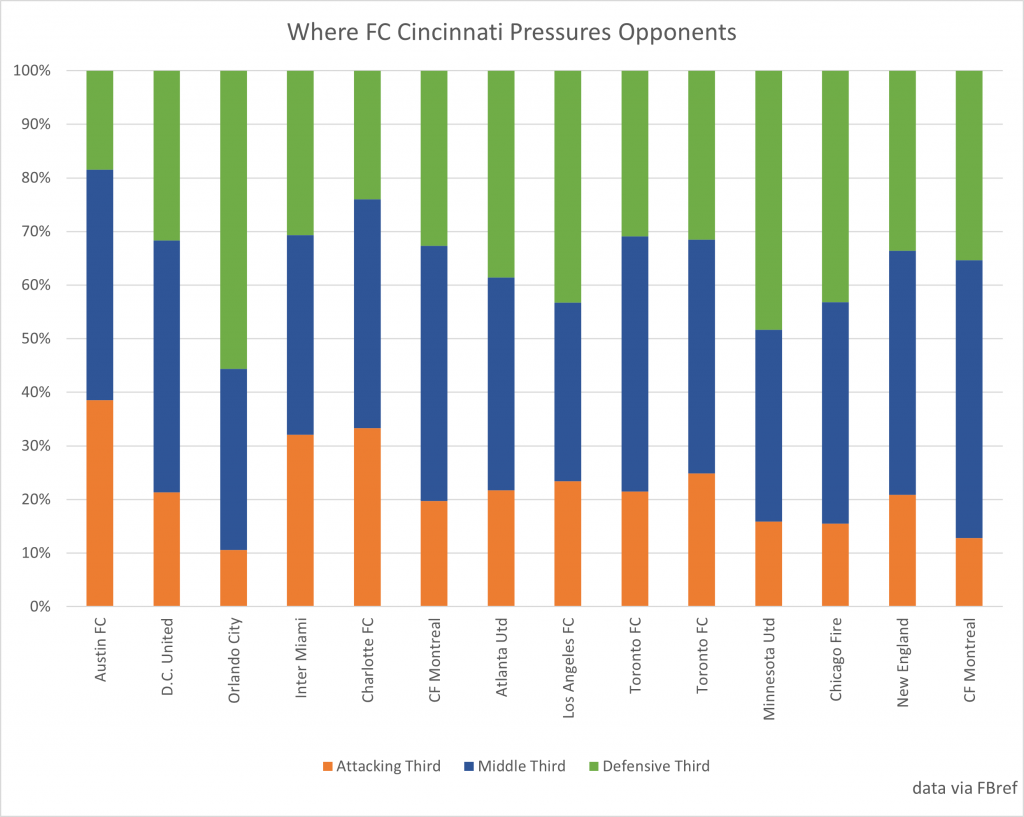 To give a slightly different perspective here’s a comparison with the Union. As you can see, the Union pushed its high pressing into a higher gear in the weeks leading up to the international break while the Orange and Blue dialed back its pressure in advanced positions. 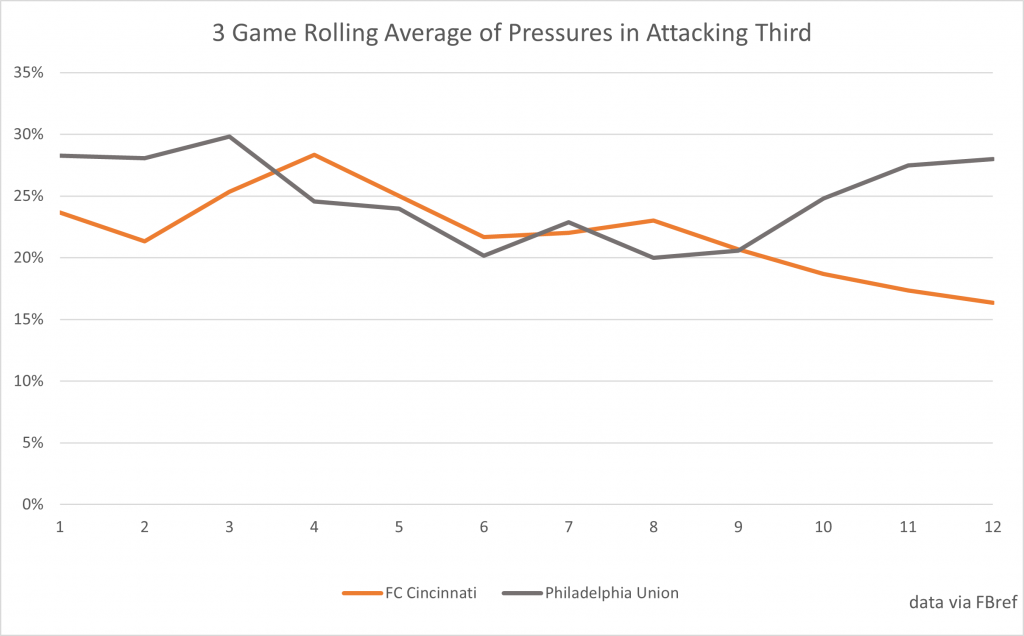 So What has Happened?

Obinna Nwobodo’s arrival coincided with FCC’s lower line of defensive confrontation. Nwobodo puts opponents under pressure a lot, it was something the team reinforced for fans when he was announced, and it’s been true for his short time in Orange and Blue. However, so far at least, FCC isn’t regaining possession after those pressures all that often. Before the New England Revolution game, citing Statsbomb data, FCC noted Nwobodo was in the 99th percentile for pressure regains in MLS with 6.49 per 90 minutes. What the team cited isn’t publicly available, so it gives us a little additional insight that we wouldn’t have otherwise had from data available on Football Reference.

His pressures have been generally limited to the middle and defensive thirds of the field, as well. Nwobodo’s incredible work rate offers a possible explanation as to why the share of pressures in the final third has gone down. Because Nwobodo is so active pressuring the ball, he accounts for a larger percentage of the team’s total pressures. And because so many of Nwobodo’s pressures are happening in the middle of the field, the percentage of FCC’s pressures in the final third is lower.

The formation might have something to do with it too. Nwobodo made his full debut in the second match against Toronto FC and has been a fixture in the starting lineup ever since. In four of those five matches, Noonan has opted for a 4-2-3-1 formation, utilizing Nwobodo and Junior Moreno as a double-pivot at the base of midfield. The only exception was FCC’s 1-0 victory on the road in Minnesota where Nwobodo and Moreno still anchored the base of midfield but played in front of three center backs. Without a two-striker formation, perhaps Noonan is less willing to pressure opponents’ defenses with the ball.

More broadly, I was curious how Noonan has opted to utilize Nwobodo in FCC’s press so I went back and watched most of the Montreal game. Here are a few instructive sequences.

In the 7th minute, Montreal’s Rommell Quioto was on the ball in the left half-space in the final third. He switches play to the right sideline to Alistair Johnson. Nwobodo circled in red in the image, adjusts horizontally across the field with the rest of FCC’s defenders. As Johnson plays the ball back inside to Matthieu Choiniere, Nwobodo steps up and applies pressure. Thanks to a solid FCC defensive shape and the pressure from Nwobodo, Choiniere had no option but to play the ball backward. In the following seconds, Alvaro Barreal’s pressure forced another backward pass, ultimately leading to an unsuccessful long ball from a Montreal center back played from his defensive half of the field. 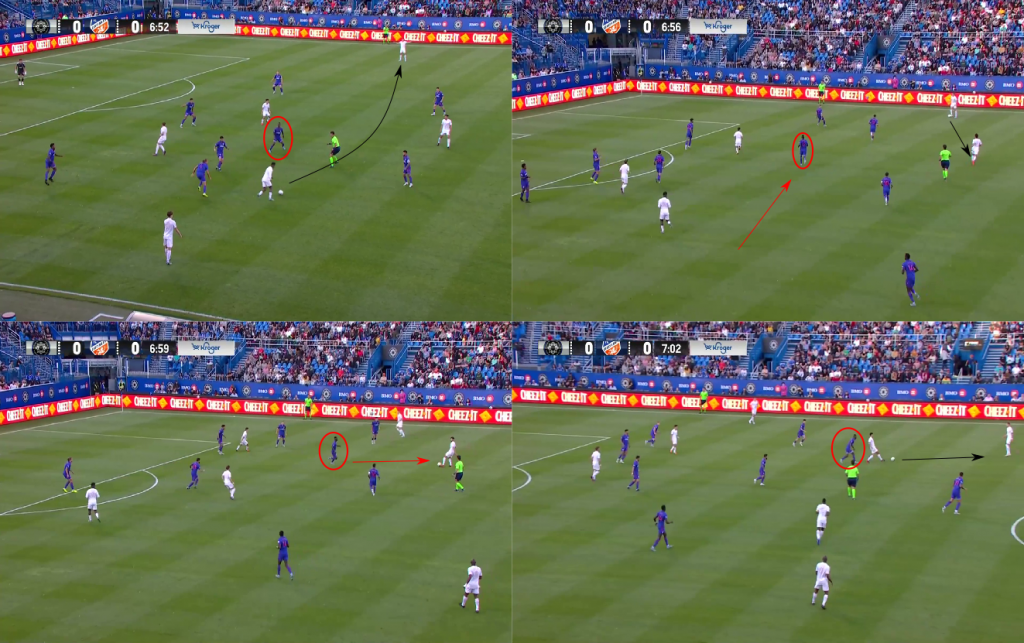 Nwobodo’s pressure on Choiniere almost doesn’t count as a successful pressure for Statsbomb because FCC didn’t regain possession of the ball within five seconds of the pressure being applied. However, Nwobodo’s pressure in the defensive third of the field helped to push Montreal back from a potentially dangerous attacking position. In 15 seconds, Montreal went from switching the point of attack to FCC’s weak side to being forced into a hopeful long ball from its half.

In the 25th minute, Montreal attempted to play out of the back. FCC’s front line, Brandon Vazquez, Lucho Acosta, and Dom Badji took away Kamal Miller’s easy options and, rather than just playing it long, he attempted a pass through the press to a retreating midfielder. Nwobodo followed the Montreal player from midfield and was right on his hip when the ball arrived, forcing a difficult attempted one-touch layoff that went past its intended target and back into FCC’s possession.

Nwobodo’s athleticism and positioning helped win the ball back for the Orange and Blue in a dangerous area of the field. Sequences of play like this one get to what Noonan said at the beginning of the season: being aggressive in attack, putting teams under pressure, and then attacking again. As FCC has pressed less in the final third, there have been fewer opportunities for Nwobodo to contribute to sequences like this. Both of these plays resulted in FCC winning the ball back, though only the second would likely be categorized as a successful pressure in the boxscore. In both, Nwobodo performed his defensive job and limited Montreal’s ability on the ball. He’s almost certainly still bedding in with the team and the system too.

With a weekend trip to Chester, Pennsylvania  I’ll be very interested to see if Noonan sticks with the dialed back press of the last few games or if he recommitments to his Philadelphia Union pressing roots. Hopefully, the international break will have given Noonan and company the extra time needed on the training pitch to get everyone on the same page as the Orange and Blue pick the season back up facing a tough stretch of games. Clearly, Nwobodo gives Noonan a great option defensively in midfield. Whether the Orange and Blue prioritize putting him in more situations higher up the field to apply pressure will be worth watching.