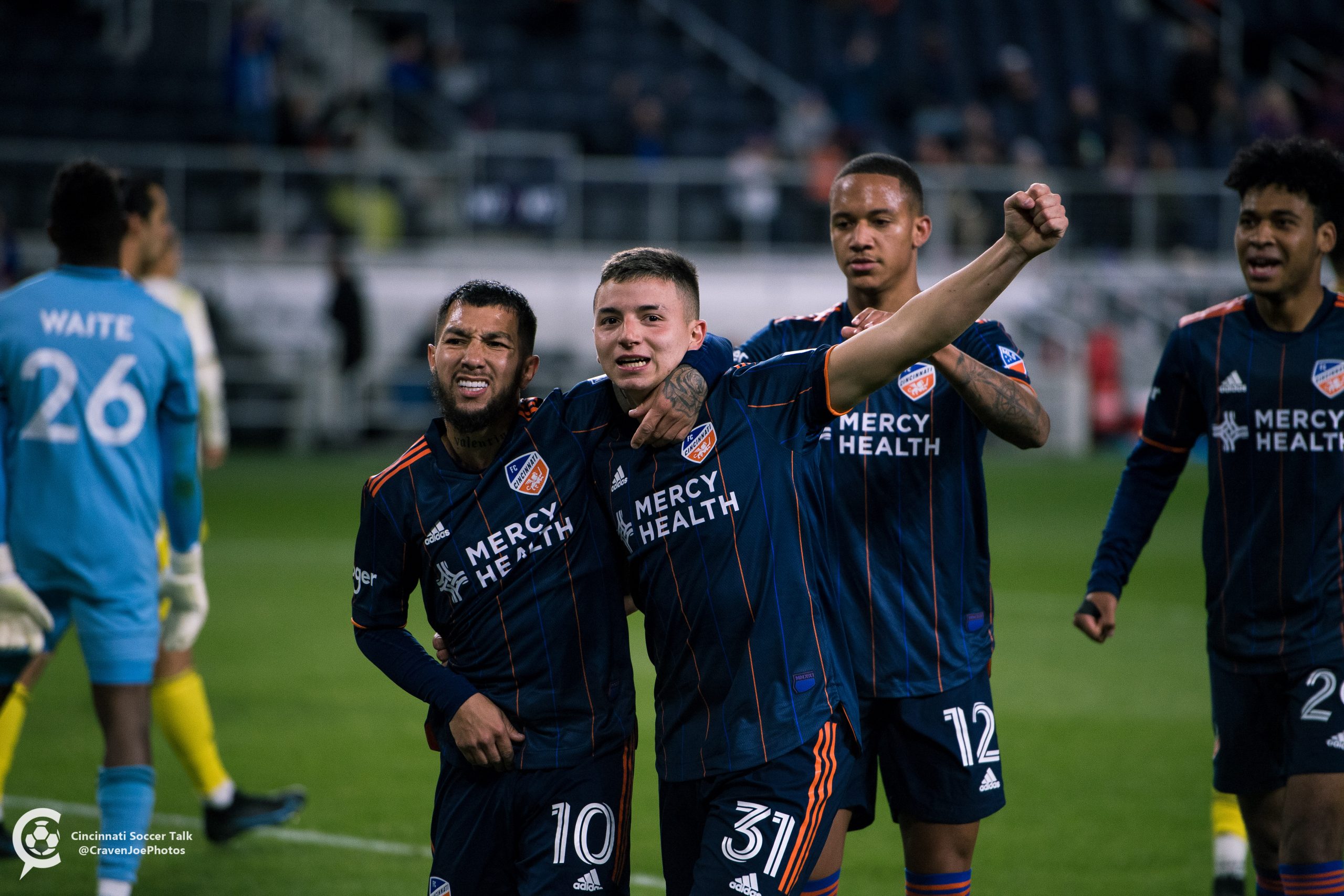 Maybe someday FC Cincinnati will play a boring match against CF Montreal but we’ll have to wait at least another year for it to happen.

Maybe someday FC Cincinnati will play a boring match against CF Montreal but we’ll have to wait at least another year for it to happen.

Less than ten minutes after Junior Moreno’s first goal in Orange and Blue, Joel Waterman equalized for Montreal in the 21st minute came after some poor set-piece defending by Ian Murphy. The less said about the defending that led to Romell Quioto’s goal right before half time the better. Unfortunately for the Orange and Blue, he didn’t miss another sitter this year. Montreal’s third goal, a volley 10 yards from goal by Mathieu Choiniere was the result of more suspect defending. Nick Hagglund’s conceded penalty led to Quioto’s second goal of the match, and Montreal’s fourth, in the 59th minute capping off a night to forget for the Orange and Blue.

The box score is ugly: four goals conceded on 2.7 expected goals according to Football Reference. Those goals came on just nine Montreal shots. Defensive lapses gifted Montreal big chances but other than that, for the most part, FCC prevented other high-quality scoring opportunities. Seeing some of the shoddy defending surely caused flashbacks in supporters to previous seasons (and a few games this year) but, given the improvements on the field through 14 matches plus the youth and still relative inexperience of this backline playing together, I’m going to give Pat Noonan and his coaching staff the benefit of the doubt heading into the international break. Hopefully, the time off and then increased opportunities on the training field will make Saturday an outlier, not a sign of things to come.

I had plans to write about a couple of other things this week but ended up going deep on one player who has been representative of how different 2022 has been than previous seasons: Álvaro Barreal.

Before the season started, FCC Manager Pat Noonan joined CST for an interview. As Álvaro Barreal’s playing time has increased over the past few weeks, I kept thinking about Noonan’s responses to two questions about roster flexibility, his expectations for players, and how it relates to Barreal’s season. (starting at 18:56 in the show if you’d rather hear it straight from Noonan) He said:

“We’ve used multiple systems within our preseason, trying to play to the strengths of our players, the guys that you’ve mentioned or that have been mentioned as wingers, Isaac and Calvin and Alvaro, how do we put them in a position to have success and so we’ve had different looks, we’ve tried players in different spots in the diamond, in a 4-3-3 to see where they’re most comfortable, to see how they can help us, so the versatility is important and players being able to show that they can play in different systems and in different ways, so it won’t be one system, it won’t be the same thing every game because i think that would be naive to attack it that way with the personnel we have, so…we’ll try to do it in a way where we put our best players in a position to succeed on a consistent basis. And what that formation looks like remains to be seen but we’ll certainly be flexible in how we approach it.”

“We’ve asked a lot of our guys to be open minded, to try new positions on the field and then we as coaches get to evaluate that and see what works and if it’s not something we like, we go back to where this player is most comfortable, and again, then it becomes to where does they fall on the depth chart, and so if you’re number two or three on the depth chart, well, you have to understand that your best opportunity to get on the field might be learning a new position, and that to me is players being open to new challenges, and if they are, then they have a better chance of seeing the field when there’s players ahead of them. And that’s not always a negative, sometimes you might be two or three on the depth chart but it’s because you have really talented players ahead of you at the moment and so that’s what we ask of the guys, just be open minded about trying new things and we see what works in the short term.”

Barreal’s 2022 season to this point reflects much of what Noonan talked about before the season started. His first start of the year came on the road in Charlotte, playing an unfamiliar position, left wing-back in a 5-3-2. With Noonan favoring a three center back formation, Barreal’s playing time was blocked by Lucho Acosta at the 10. His cameo at wing-back wasn’t a resounding success but injuries, and FCC’s roster, seemingly forced Noonan’s hand tactically.

With a depleted squad and the arrival of Obinna Nwobodo, Noonan shifted to a 4-2-3-1 shape, a system with an opportunity for Barreal to play his natural position as a winger. Noonan’s willingness to be flexible when it came to formation provided an opportunity for Barreal but his contributions on the field in limited minutes pushed his way back into contention for a starting spot. Barreal’s brace against the Pittsburgh Riverhounds in the U.S. Open Cup set him up for strong performances in the team’s two wins against Toronto FC. He was a bright spot for the Orange and Blue in its loss to the New England Revolution in the next round of the Open Cup. Barreal’s form has continued, scoring goals against New England in MLS play and on Saturday in Montreal.

Against Montreal, Barreal had the most touches in the final third of the field as well as pushed the team forward in possession, leading the team with five progressive passes and three progressive carries. He tracked back too, winning four tackles. There were some miscontrolled touches and opportunities that maybe should have resulted in a shot but Barreal’s growth on the field in recent weeks has been noticeable.

His goal in the 52nd minute gave FCC life after Montreal went ahead by two minutes earlier. It was a big goal in the game but also importantly demonstrated a wrinkle to the Orange and Blue’s attacking play. When Barreal started at wingback against Charlotte, he and Acosta ended up occupying the same space too often. Acosta loves to drift around in the final third, finding the ball in advantageous positions.

In the lead up to Barreal’s goal, Acosta drifts wide and Barreal assumes Acosta’s central position. The sideline angle in the highlight gives a great perspective. Barreal checks his run at the top of the 18-yard-box, leaving him room between Montreal’s retreating defensive line and its midfielders. Acosta is able to sneak an outside-of-the-foot pass past his defender to find Barreal near the penalty spot, where he finishes through traffic with his first touch.

This sequence demonstrates chemistry and cohesiveness in the attack from the Orange and Blue. Brandon Vazquez’s run deserves mention because it occupied Montreal’s defenders but the interchange between Acosta and Barreal is promising. If Barreal and Acosta can stay on the same page, FCC’s offense should benefit because both players can bring quality playing centrally or wide.

Though he might not have been number one on the depth chart entering the regular season, Barreal has demonstrated his value to the Orange and Blue. Noonan’s willingness to keep adapting tactically produced an opportunity for one of FCC’s most talented young players, and so far, he’s taken it and doesn’t look like letting go.