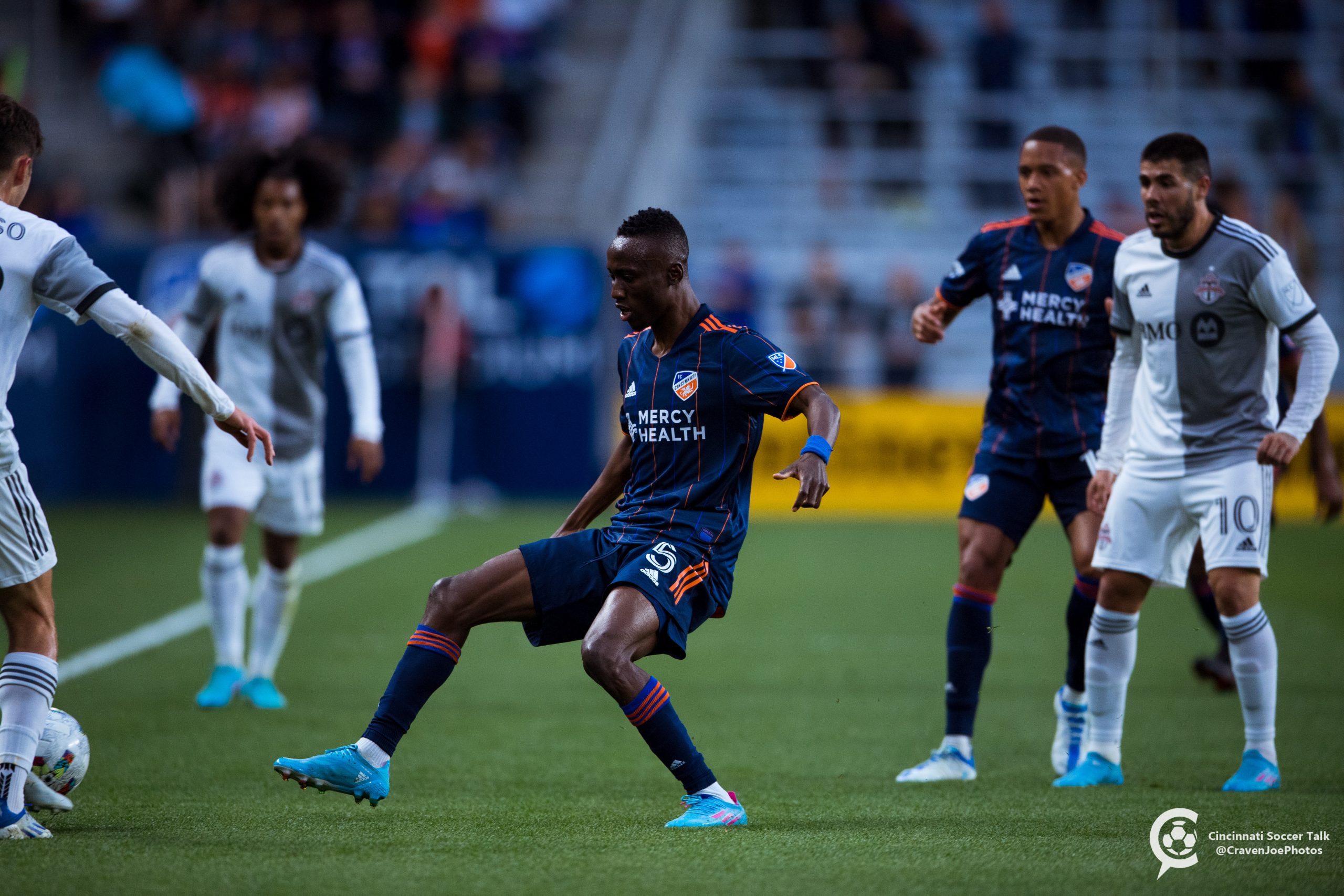 In the second half of FC Cincinnati’s 1-0 on the road against Minnesota United, Pat Noonan had a choice.

In the second half of FC Cincinnati’s 1-0 on the road against Minnesota United, Pat Noonan had a choice. Noonan could have opted to try to shut up shop and play for what would have been a very respectable draw on the road against a good Western Conference opponent. He didn’t do that.

Instead, Noonan kept pushing all the attacking buttons available to him. Álvaro Barreal replaced John Nelson in the 63rd minute and Haris Medunjanin and Arquimides Ordonez came on for Junior Moreno and Dom Badji, respectively, in the 76th minute. Lastly, Geoff Cameron made way for Calvin Harris in the 84th minute. All of those changes were made with the aim of pushing for a winning goal. To be fair, Noonan didn’t have much in the way of other options on the bench as the Orange and Blue is dealing with a bit of an injury crisis. However, Noonan could have been more conservative.

Barreal and Harris ended the match playing as wingbacks in the Orange and Blue’s 5-3-2 formation. Both made positive impacts. Barreal nearly scored in the 86th minute with a very well struck effort that was only kept out by an even better effort by Dayne St. Clair at his near post. Harris, of course, assisted Brandon Vazquez’s game-winning goal in the 93rd minute.

In the post-game, Noonan acknowledged both players’ efforts, saying, “Alvaro and Calvin being put in positions that they’re unfamiliar with, but the commitment’s there from the group. And that’s what enables you to find points on a night where you’re not at your best.”

The Orange and Blue might not have been at its best for stretches of Saturday but Noonan kept pushing to win the match, even if that meant playing two young wingers with little to no experience as wing backs. The belief evident on the field and in the dugout is something we’re not necessarily accustomed to seeing from FCC. Going toe to toe with playoff teams on the road and being the aggressor is where FCC is right now and it might take some getting used to. But it’s the pleasant reality of where we are.

I’m hesitant to write about Lucho Acosta again but, after a game like Saturday, it’s almost impossible not to. His pass to the assist on the game-winner will rightly get much of the attention but Acosta’s contributions throughout the entire 90 minutes were impressive. According to Football Reference, his 25 progressive actions (11 passes, 14 carries) pushed FCC into dangerous areas throughout the game. Acosta finished the match with six key passes, 0.8 expected assists, and 10 shot-creating actions. 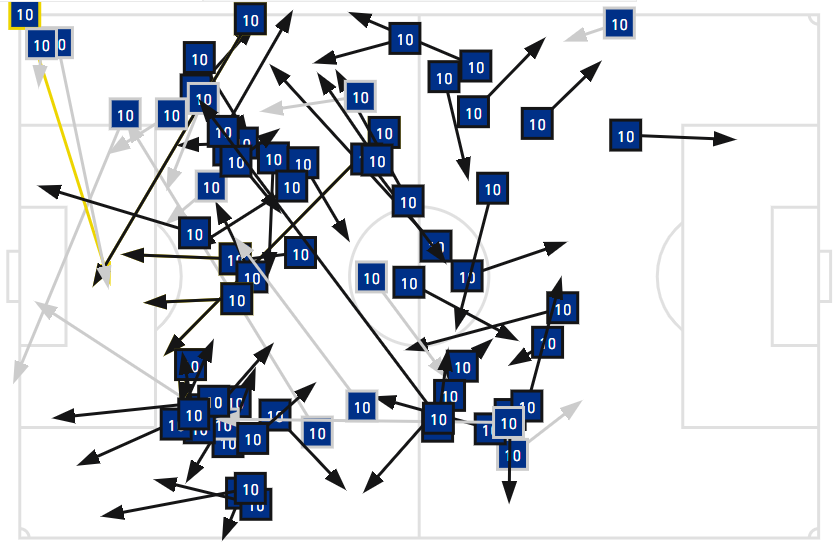 With a double pivot set up behind him and forwards who aren’t averse to tracking back and helping out defensively, Acosta can stay higher up the field and either attack backpedaling opposing center backs in transition on the dribble, or play ahead of them to strikers making runs towards goal. Acosta’s passing map against Minnesota shows he was able to impact the game from more advanced positions. Acosta was receiving the ball in the final third rather than being the one expected to get it there. FCC’s passing network shows Acosta as more of a third forward than a midfielder.

In sustained periods of possession for opponents, Acosta will come back closer to FCC’s goal and help out defensively but he’s not a key element of Noonan’s defensive structure. For instance, on Saturday, Acosta finished the match with two tackles won and three interceptions. So he’s still chipping in defensively. He’s willing to press opponents on the ball and try to win the ball back but the main defensive duties fall to others. Despite being a nominal midfielder, Acosta takes up defensive positions much more like a forward. That freedom allows Lucho to find spaces higher up the field to receive the ball following turnovers and get on the counter attack. 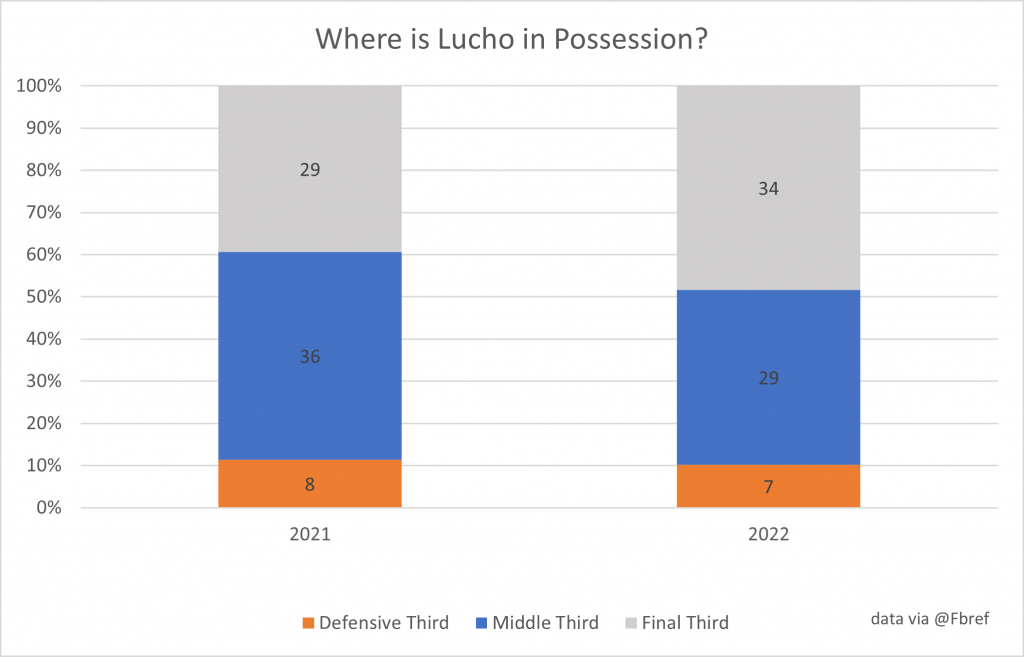 During preseason, I wrote about Pat Noonan emphasizing Acosta getting the ball in space where he could turn and attack. That’s happening this year and the Orange and Blue are more dangerous because of it. Acosta is on the ball five times more per match in the attacking third in 2022 compared to last year. Putting him in a position to set up his teammates higher up the field has paid off for everyone and on Saturday, it helped take all three points back to Cincinnati.

Since I mentioned the midfield double pivot freeing Acosta of some defensive responsibilities, it’s worth spending just a little bit of time on the contributions of Junior Moreno and Obi Nwobodo. Minnesota controlled the opening stages of the match and ultimately slightly out-possessed the Orange and Blue but FCC’s defense really limited quality chances for the Loons. A large part of that was due to the defensive work of Nwobodo and Moreno. Against Minnesota, the two combined for eight tackles, eight interceptions, and 27 ball recoveries. Yes, 27. 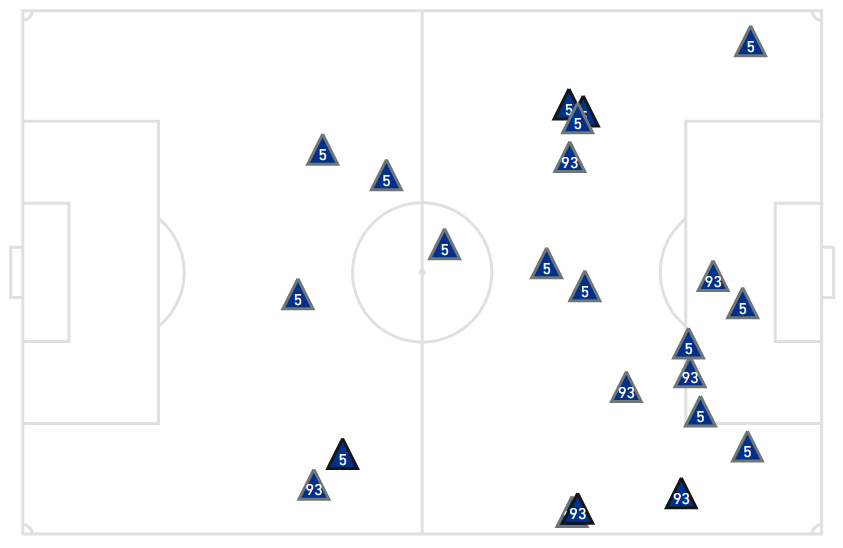 Offensively, Nwobodo and Moreno were reliable on the ball (a combined 87% passing completion percentage) but also chipped in ball progression duties. Moreno’s eight completed passes into the final third led the team and Nwobodo added three more. They made some line-breaking and forward passes but the reliability of Moreno and Nwobodo to move the ball horizontally in possession to drag opposing players out of position and shift the point of attack really helped FCC on Saturday. 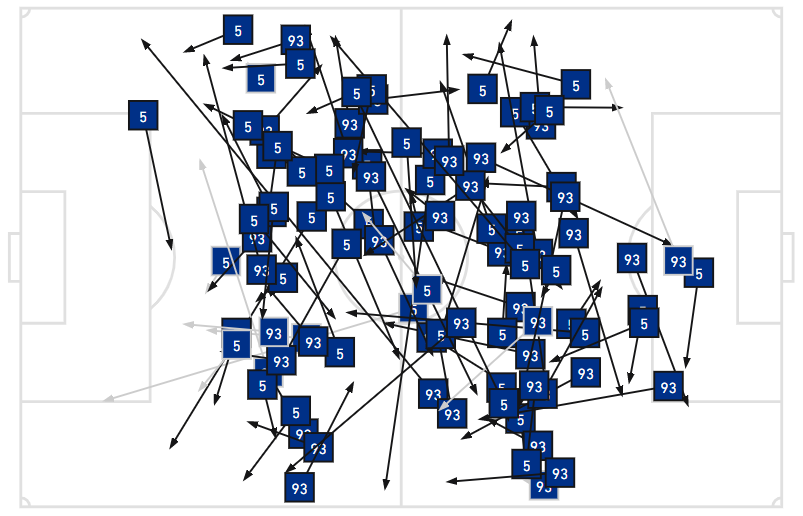 A solid midfield pairing, or trio if Noonan opts for a return to a 4-4-2 diamond, behind Acosta should continue to put the Orange and Blue in positions to win games. It’s way too early to be thinking about the playoff line but if FCC keeps playing like this, that conversation might not be too far off. At the very least, this three-game stretch has reminded FCC supporters how much fun it is to support a team picking up three points a game. There will be dips ahead, that’s the nature of the MLS season, but the progress already on display a little more than a quarter into the season should inspire confidence in the current leadership of the club.