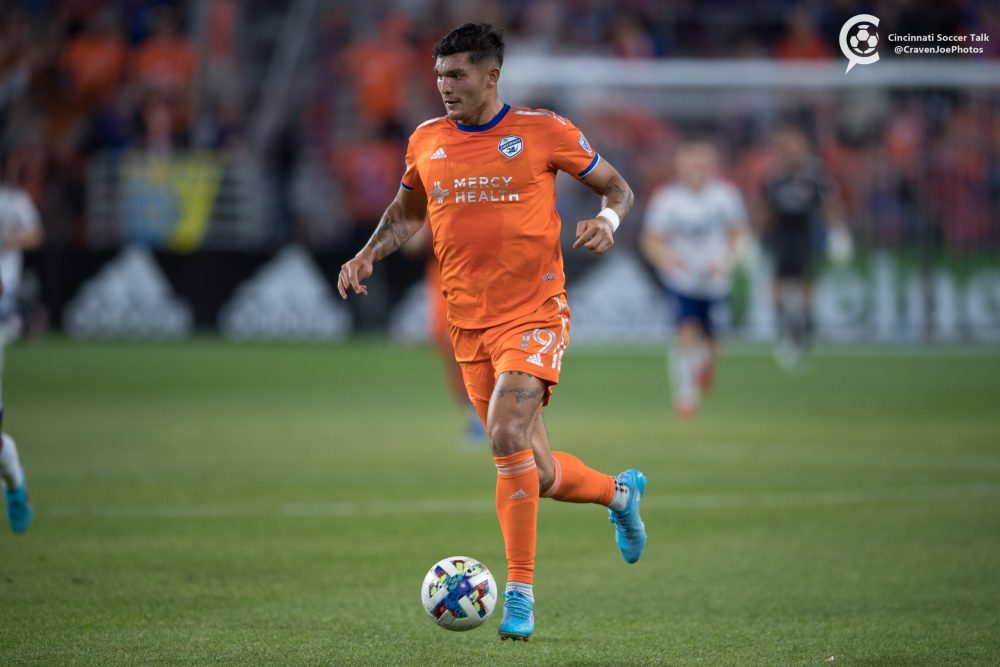 FC Cincinnati picked up all three points in the team’s matchup against Minnesota United FC by a score of 1-0 thanks to a late-game winner from Brandon Vazquez.

The match started with nearly nonstop pressure and attack from the Loons. Minnesota continually hammered away at the FCC final third.

However, they never really had an outstanding look at goal in the beginning stages of the match. The Loons had multiple set-piece opportunities but were not able to get anything that required Roman Celentano to need to make a massive save. This continued for around the first 20 minutes.

FCC started to see a little bit more of the ball starting at that point. What was really interesting is FCC had wonderful looks at goal. The team’s two or three chances coming straight out of this big Minnesota wave of possession were better than anything the Loons were able to muster.

At this point, FCC started to possess the ball and get closer to the Minnesota goal. The team had some great chances but was not able to get past Dayne St. Clair.

Following this small moment, Minnesota regained some of their former dominance for a short amount of time. The team’s attack was a bit scarier and looked like they might get close to the net. However, that was not the case, as Celentano continued his excellent work at being at the right place at the right time and being aware of where he is in the goal. That might be his best skill.

The match continued with a bit of a back and forth, both sides getting a few chances.

FCC had the best chances of the half, with a few that definitively should have been scored but weren’t. Cincy needs get better at finishing if they want to continue improved results. The team could have and should have been up multiple goals going into halftime.

The second half actually started fairly similar to the first half, with the Loons controlling possession and the tempo of the match. The Loons also started the same as the first, with not having a lot of bite in their attacking, but growing into that part of the match.

Lucho Acosta really started to show his quality in the start of this half, as he consistently played outstanding balls into the strikers. However, the strikers were just not able to do anything with them.

The following 20 minutes or so really felt like a back-and-forth between both sides, with both of then getting really close to the goal but neither able to make that final pass that got them into a perfect position.

Something that might have been forgotten was that Cameron called to Noonan for a substitution. Coach replaced him with Calvin Harris, who ended up being a major factor in the match-winner.

FCC really started to put on the pressure late into the match, with one shot, in particular, being outstanding. Sub Alvaro Barreal got the ball on the left side outside the box and hit it in a perfect place at the top left corner. However, St. Clair wonderfully saved the shot and didn’t allow it to go into the net. In my thinking, this was the team’s last chance.

A little later, around the 93rd minute, FCC was playing the ball at the top of the box. Acosta picked up the ball and spotted Harris running down the right side of the box. Acosta played him the ball beautifully. At the same time, Vazquez made a run into the middle of the box, but then doubled back to the near post at the exact time Harris was getting the ball. Harris perfectly placed the ball for Vazquez to hit it into the net for the match-winner.

Minnesota had a couple of chances following this goal, but were not able to get it into the back of the net. The match ended at 1-0 in FCC’s favor.

This match shows the absolute shift in FCC’s mentality. Any other version of this team would have folded at the end. However, this one kept working and actually ended up winning it. This match will have long ramifications because the team will now believe it can win any match if it keeps trying. That belief is all that matters.