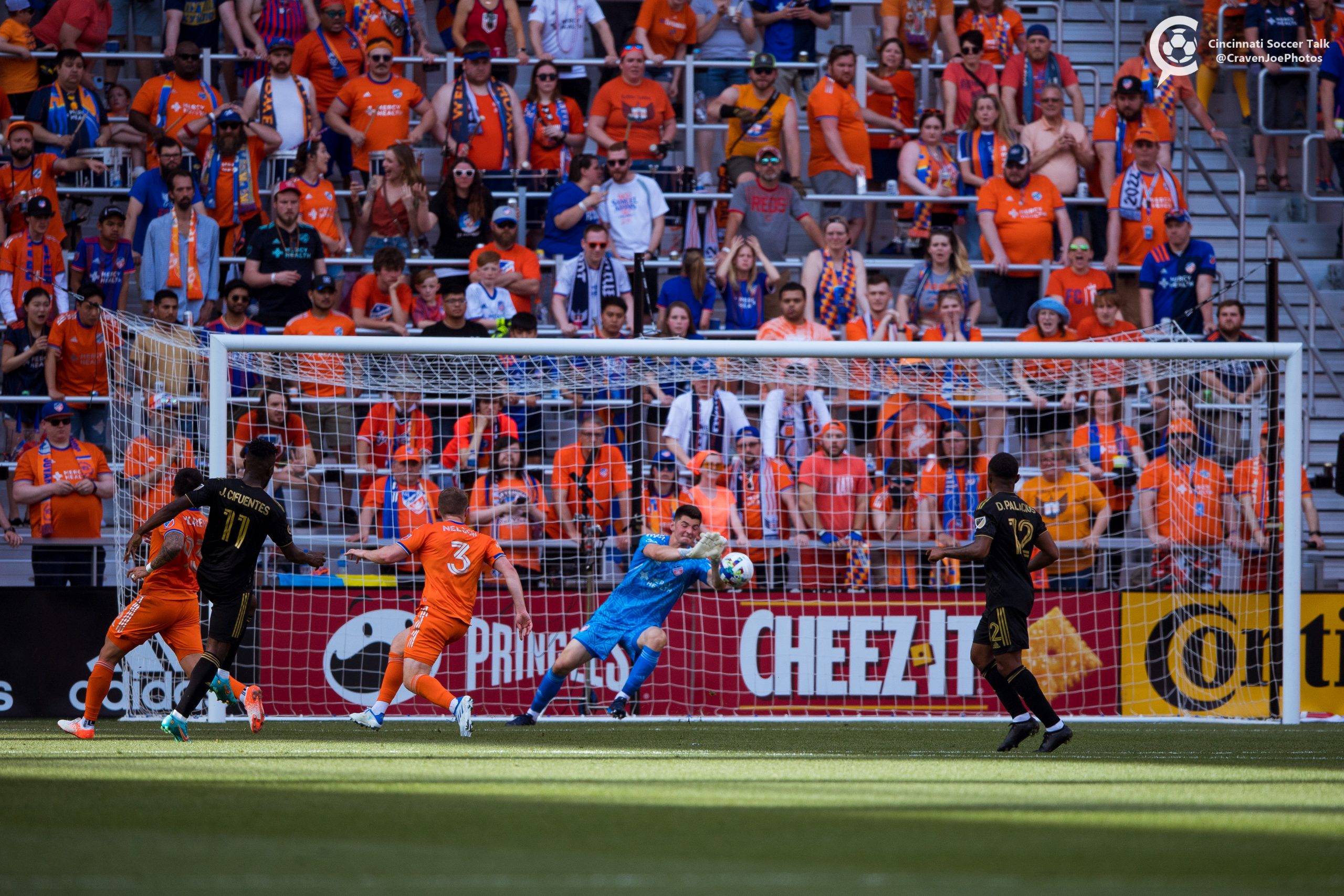 Injury, illness and suspension meant Pat Noonan’s lineup did not include a number of regular starters, including Brandon Vazquez, Geoff Cameron, Nick Hagglund and goalkeeper Alec Kann, whose absence meant Roman Celantano made his MLS debut in goal.

Celentano was something of a revelation, making a number of key saves to support a spirited effort by the home side, which battled evenly with Steven Cherundolo’s team for much of the match.

Noonan had this to say post match about the 2022 MLS SuperDraft pick.

“He made a lot of big saves for us. It didn’t look like a rookie in his first start. He was fantastic. That was a good sign for Roman and for our group that we have goalkeepers that are able to keep us in games when we need them to. So, really pleased with Roman.”

A tough giveaway from Alvas Powell in the 79th minute allowed LAFC to score the winning goal, Juan Carlos Vela feeding Danny Musovski for a close-range finish. LAFC had slight advantages in possession and shots in what was an open game.

The Orange and Blue never looked like not belonging on the field with one of the early-season favorites for MLS Cup honors. FCC created chances, cause LAFC problems with pressing and defended with vigor.

Post-match, coach Pat Noonan called it “A disappointing result. Unfortunately, that’s been a theme, but I couldn’t be more proud of the group and the effort they gave. The disappointing part is not to be rewarded with some points tonight, because I thought we deserved some points. The chances were there for us to get a second goal early in the second half, but we just couldn’t convert our chances to walk away with some points.”

Each team had a decent scoring chance in the first 15 minutes. A foul by Donnell Henry gave FCC a free kick just outside the LAFC penalty area, but the resulting set piece came to nothing. A few minutes later Juan Carlos Vela went down in the area under a challenge from Alvas Powell that might have been deemed a penalty, but nothing was awarded.

In the 22nd minute, an LAFC corner led to a close-range shot from Kwadwo Opoku that required a quick-reflex save by Celentano to keep the match scoreless. FCC was managing to get forward with some regularity, and Dom Badji and Luciano Acosta each had an effort on goal that LAFC goalkeeper Maxime Crepeau kept out. Acosta in particular was standing out for FCC with some nifty long passing, including a rabona that led to a half chance.

Jose Cifuentes forced another good save from Celentano in the 40th minute, while Brenner’s 43rd minute effort was easily saved by Crepeau, and it looked like the teams would go to the break at 0-0.

But a poor goal kick from Crepeau was intercepted 35 yards from goal by Yuya Kubo. The midfielder fed Brenner who touched it to Acosta, and the attacking midfielder coolly side-stepped a defender before slamming the ball into the back of the net for a 1-0 FCC lead at halftime.

LAFC predictably came out firing after the break, and Celentano had to sprawl to keep out an effort from Cristiano Arango just after the 2nd half kickoff. Minutes later a turnover led to Acosta feeding Badji for a close-range chance, but the shot was straight at Crepeau. Then LAFC produced an effort from Opoku that Celentano made a fine save to keep the ball out of the net.

LAFC continued to turn the screw and corner in the 59th minute led to a strike from the edge of the area by Kellyn Acosta to tie the match at 1-1.

FCC responded positively to conceding, and Alvas Powell’s deflected drive beat Crepeau but was cleared off the line by a defender in the 66th minute. Shortly afterward, Ian Murphy went down with an injury and veteran center back Geoff Cameron was introduced to the contest.

Disaster struck in the 79th minute when a backpass from Powell hit Vela and caromed to Latif Blessing. Blessing returned the ball to Vela and the LAFC DP fed Musovski for a close-range finish to make it 2-1.

The Orange and Blue did not go quietly however, and some nice interplay from Cameron and Acosta led to a near-miss from substitute Allan Cruz who had made a good run into the LAFC area. Celentano then turned in a smart double save from another Vela-inspired LAFC attack.

FCC produced another couple of half-chances in an all-out press to equalize, and while LA effectively wasted time via a pair of brouhahas in the closing minutes, the 2-1 result was probably fair overall. Still, Noonan’s team will have been reminded that they are moving in a good direction and perhaps not all that far from being at the level of competitiveness required to move to higher ground in MLS.

FCC plays next at Toronto on Saturday.