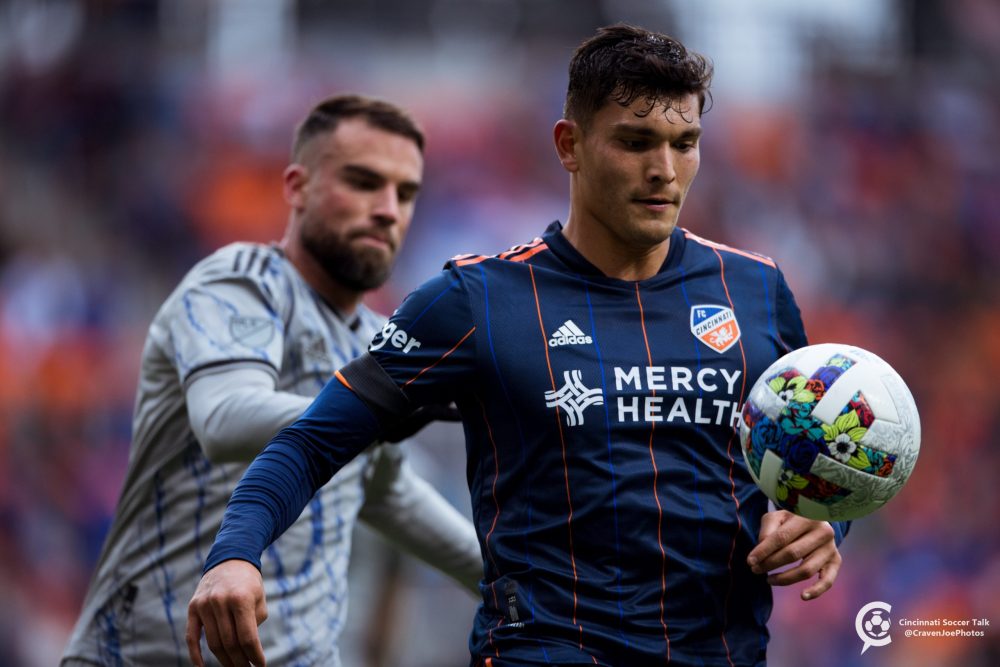 Nate points to several areas in which FC Cincinnati was not quite themselves.

FC Cincinnati’s recent matchups have resulted in some wild results and Saturday was no different. Don’t be misled by Montreal’s four goals, however. The total wasn’t a reflection of a truly dominant performance like last season’s 5-4 loss. FCC conceded four goals on nine shots totaling 1.2 expected goals. In contrast, FCC’s attacking play created 17 shots and 2.6 xG. Even accounting for FCC’s scored penalty, the Orange and Blue got into better scoring opportunities.

We’re still in small sample size mode this early in the season but, overall, FCC is limiting chances for its opponents and creating on the other end of the field. It’s certainly frustrating when an avalanche of individual errors leads to goals and dropped points, especially when mistakes have been a constant in years past. However, 2022 FCC is still different. The underlying numbers show a much improved team, one that’s leaps and bounds ahead of last year’s results.

We shouldn’t forget that FCC is only six games into the Pat Noonan era and that the roster is still very similar to last year. Yuya Kubo has looked pretty good as a midfielder in 2022 but really struggled on Saturday. That shouldn’t be a surprise. Kubo is still not a natural midfielder. He’ll make mistakes, like the ones on the second Montreal goal, that other more experienced midfielders might not but that doesn’t change the fact that he’s the best option at his position on the roster right now.

The Orange and Blue’s improvement is not going to be constant on a week-to-week basis. There will be positives but there will be setbacks too. I think we’re still seeing enough to be optimistic that FCC is on the right path. Even though Saturday was full of frustrating mistakes, the trend line is still up.

A few other things caught my eye on Saturday.

Whether you’re going off the eye test or looking at the box score, Geoff Cameron didn’t seem to have the best day against Montreal. He applied pressure to the ball 17 times, with FCC winning back possession within five seconds just over 40% of the time. He won 50% of his tackles against opponents attempting to dribble by him and won just one of six aerial duels. When I was watching, I kept noticing him really high up the field and having to recover after Montreal played through FCC’s shape. He has brought some defensive solidity to the Orange and Blue but any tactical system relying on 36-year-old Geoff Cameron’s recovery speed just doesn’t feel like a good decision. 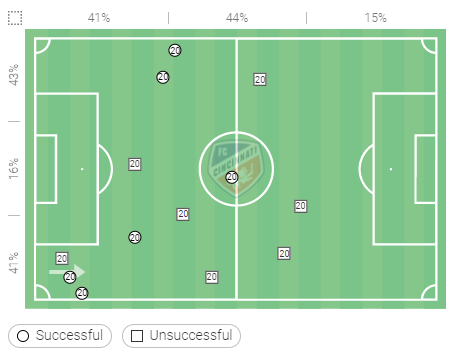 It’s worth talking about why Cameron ended up in those situations against Montreal. Playing as the middle center back in the back three, Cameron often pushed forward to fill space between the defensive line and the midfield as FCC pressed from the front. Cameron also followed Kei Kamara as he dropped deeper to battle for long balls from Sebastian Breza or as Montreal opted to bypass the press.

FCC’s press never really got going. The Orange and Blue pressured Montreal 189 times but regained the ball within five seconds of the pressure just 25.9% after a pressure.

Throughout the season, FCC has punished opponents in moments of transition. On Saturday, Montreal returned the favor. Three of Montreal’s goals came in moments following turnovers. The expected goal values of each chance, with the exception of Joaquin Torres’ winner, weren’t particularly high. Djordje Mihailovic’s goals came in crowded penalty areas but he used FCC defenders’ positioning against them, screening Alec Kann’s vision until the shots were already too close to react to.

The performances of FCC’s wingbacks deserve some mention too. Alvas Powell had a man of the match performance, providing real danger up the right flank when he was on the field. He wasn’t credited with an assist on Brandon Vazquez’s opener but his run up the right and cross set up Vazquez’s tap-in. His mazy run through multiple Montreal defenders led to the 59th minute equalizing penalty, converted by Lucho Acosta minutes later. Powell’s ability with the ball at his feet created danger all day on the right wing, a requirement in FCC’s narrow formation.

On the other side of the field, Ray Gaddis stepped into the starting line up at left wingback as Pat Noonan continued to look for options to replace Ronald Matarrita. Gaddis, naturally right footed, is not an ideal fit at left back. He didn’t provide the same ball progression abilities as Matarrita or the same danger from wide. It should be mentioned that Gaddis was shadowing a far more traditional winger, Torres, on his side than Mihailovic on the other side of Montreal’s 3-4-3 formation. With Torres looking to provide an outlet in transition on the right wing, Gaddis was pinned deeper than Powell. Still, Noonan has some questions to answer left back going forward remains an open question as Matarrita begins to rehabilitate from ankle surgery.

In contrast to FCC’s pressing, Montreal concentrated its efforts in the middle third of the field. Victor Wanyama and Ismael Kone, Montreal’s central midfield partnership, pressed effectively and won the ball back in dangerous areas.

As mentioned above, Wanyama bullied Kubo off the ball in the lead up to Montreal’s second goal, catching FCC in transition. In the hour he played, Kubo never really impacted the game going forward, especially not to the level we’ve seen this season. With FCC’s preference to push forward after turnovers, losing the ball immediately creates very dangerous situations where the team is stretched. 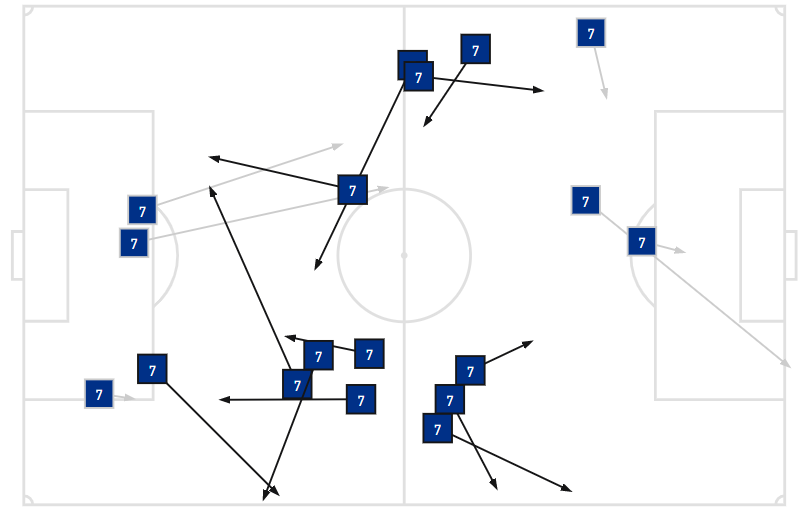 Junior Moreno was solid on the ball but his role in the system is more of recycling than forward passing. Without Kubo taking on ball progression from midfield, as happened so much last season, Lucho Acosta had to drop deeper into midfield to find the ball. He totaled his highest number of passes into the final third and his second most touches in the middle third of the field in 2022. Noonan has rightly emphasized getting the ball to Acosta in dangerous areas and on Saturday, FCC struggled to do so. The knock-on effect of that is Acosta taking on the role of getting the ball into dangerous areas where, for as well as they’ve played this season, Brandon Vazquez and Dom Badji struggle to create shots for themselves and others.