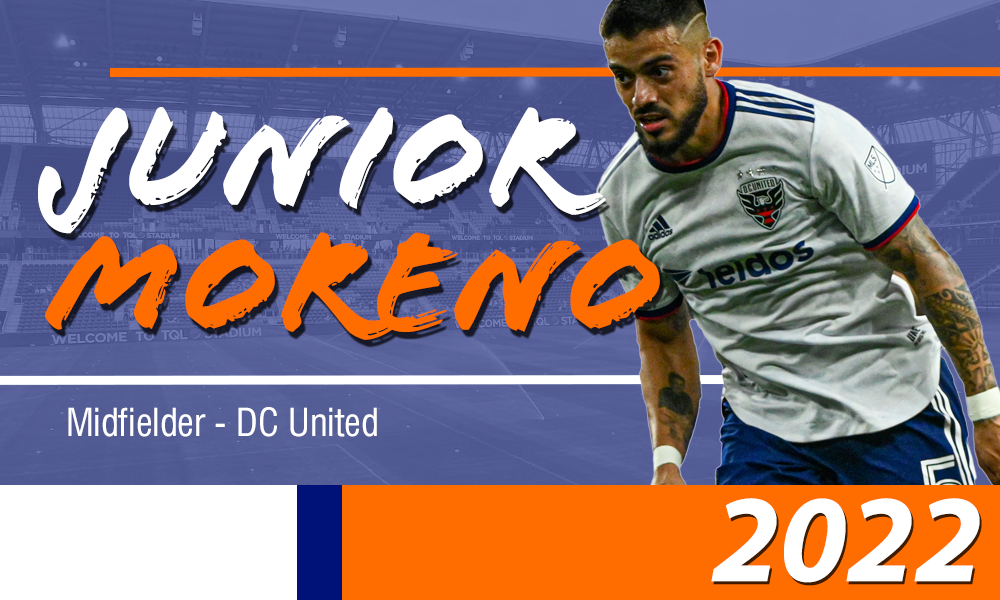 Overall Moreno should be an upgrade at the 6 role for FC Cincinnati. He is likely a league average-level defensive midfielder that should be on a club-friendly contract.

On Tuesday, Goff reported that FCC traded $250,000 in General Allocation Money to DC with an additional $175,000 in GAM available if performance incentives are reached. The club confirmed those details. FCC have signed Moreno to a contract through 2022, with an option for the 2023 season.

“I’d like to welcome Júnior Moreno to FC Cincinnati,” said FC Cincinnati General Manager Chris Albright. “His experience, both in MLS and internationally, will be a valuable addition to our group.”

Moreno was not re-signed to DC United in the offseason, but DCU did make a qualifying offer to the midfielder, retaining his league rights. The Venezuelan did not log enough multi-year service time in the league to trigger Free Agency status this offseason. Moreno started 91 games for DC with 97 total appearances, scoring one goal with nine assists.

Goff also reported that Moreno has not appeared in training camp for DC but he was called in for this past World Cup qualifying window for Venezuela.

Laurel Pfahler of Queen City Press tweeted that Moreno had joined FCC in practice for a public session on Wednesday.

Moreno came to MLS in 2018 after spells at Venezuelan clubs Zulia FC and ACD Lara. It was rumored that Moreno was going to move to Tigre in the Argentine Primera but talks apparently broke down.

The DMid is known for being able to shield the backline while also providing a passing outlet to the advanced midfielders. His 4.87 progressive passes per 90 ranks him in the 77th percentile while his passing percentage of 85.3% lists him in the 52nd percentile.

He is not the most fleet-of-foot, but should offer better mobility than previous options at the 6-role. Many league pundits, Doyle most recently, criticized his play in 2021. It is also theorized United’s frenetic continuous pressing style under manager Hernán Losada likely caused some struggles.

Moreno does have a high success rake in tackles ranking in the top 77% with 2.85 successful tackles/90 minutes.

Overall Moreno should be an upgrade at the 6 role for the Orange & Blue. He is likely a league average-level defensive midfielder that should be on a club-friendly contract. Should Moreno net DC the entire sum of allocation money, his performance on the field would make it look like a shrewd deal by new GM Chris Albright. If he nets only the original sum, that is still a valid deal for what will ultimately be a player who is in the 23 nearly every match day. Without him, FCC would be asking a lot from Medunjanin at age 36.

Most importantly, this move should not have too much of an impact financially should Albright want to bring in a high-priced midfielder later in the season.

On Wednesday morning, FC Cincinnati announced the signings of defender Ian Murphy and forward Nick Markanich to MLS contracts through the 2022 season. Each player will have options through the 2025 season.

FCC selected Murphy and Markanich with the 14th and 30th picks, respectively, in the 2022 MLS SuperDraft presented by adidas.

Both players had rave reviews from the staff following the 2022 preseason.

Robledo Signed to a Homegrown Deal?

Check out our latest Talking Tactics podcast where Coach Gough and Nate Gilman break down the club’s newest player.