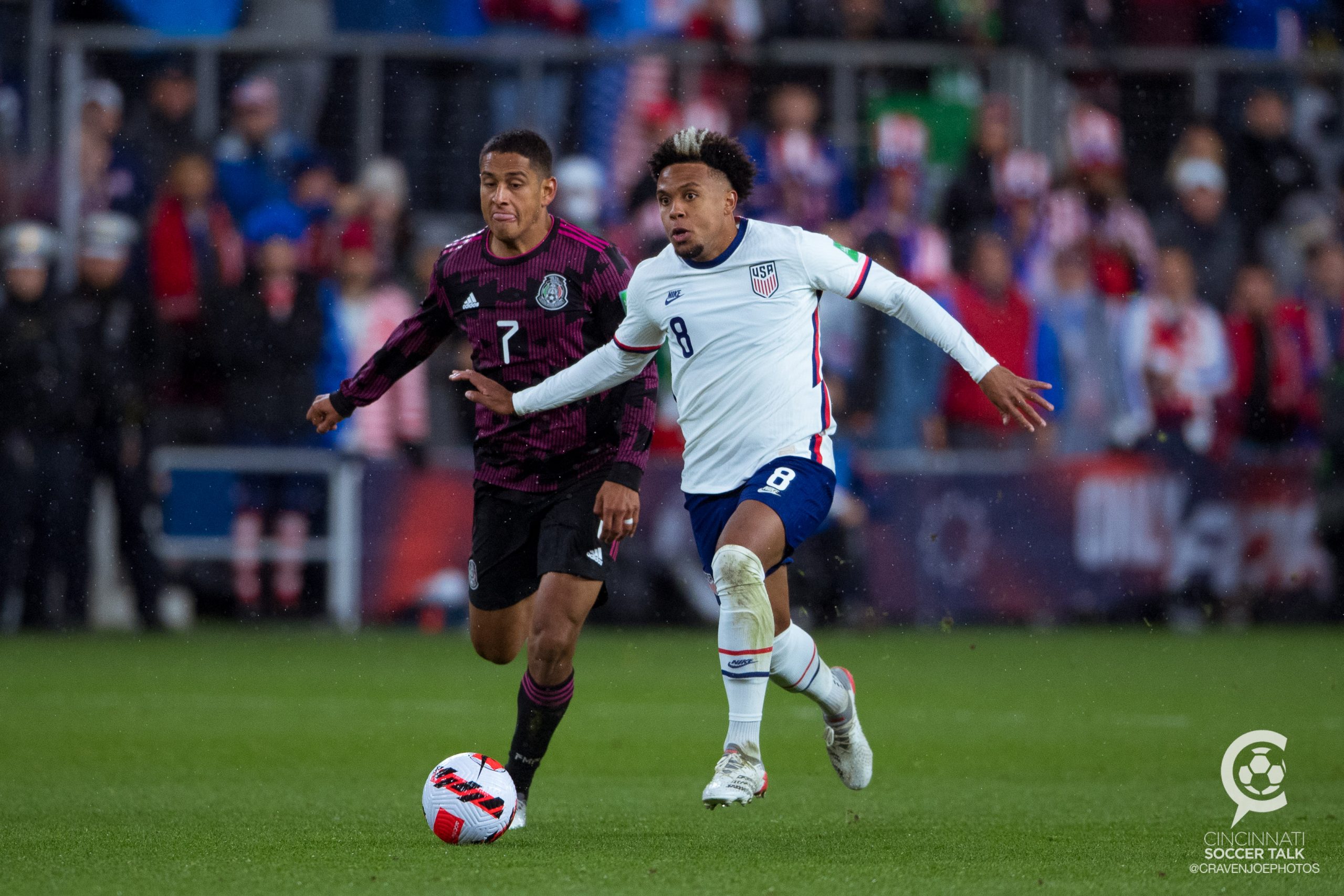 The United States ride a second-half wave with a 2-0 win against Mexico and stand at the top of the Octagonal.

With the eyes of the Western Hemisphere on Cincinnati, the United States and Mexico brought their decades-old rivalry to TQL Stadium to finish the first half of the 2022 Octagonal. While there may not be many World Cup qualifiers in the United States against Mexico for a few more years, the outcome returned to a familiar, resounding phrase.

The United States men’s national team withstood first-half challenges with a rock-solid game by goalkeeper Zack Steffen, then rode goals by Christian Pulisic and Weston McKennie in the second half to defeat Mexico 2-0. The result brought the sell-out crowd at TQL Stadium to their feet in the end and brought the USMNT to the top of the Octagonal.

The general setup of the Starting XI rosters reflected the impact recent injuries had produced. Pulisic was left off the starting lineup with Brenden Aaronson picking up his role on the wing. While most of the lineup was uncertain, the goalkeeper role was not. Head coach Gregg Berhalter indicated that Steffen would start days before the actual match.

On the Mexican side, the Starting XI was also in flux, as the back line was without center back Nestor Araujo. Additionally, Hector Moreno, another key on defense, was dealing with injury and did not start. However, this was also the first time the USMNT had faced the three-headed offense of Raul Jimenez, Hirving Lozano, and Jesus Corona this year.

The first half ended with the United States getting more of the possession (54/46) and shots taken (7/5), but Mexico’s counter got two solid shots on frame to test Steffen. Edson Alvarez managed a breakaway shot in the 11th minute outside of the box, only for Steffen to sprawl to his right and flick it away by his fingertips. A similar situation and shot by Lozano in the 17th minute forced Steffen to his other side, smothering the shot into the grass.

The United States had their own opportunities on goal with shots by Tim Weah in the 7th minute and Aaronson in the 18th. However, as the time ticked towards halftime, the USMNT dialed up the pressure. Yunus Musah had arguably the best look on goal in the 41st minute off a feed from Ricardo Pepi, only for his shot to spray wide of net.

Overall, the general pace slowed in the latter stage of the first half, but both teams showed mettle in their center backs. Walker Zimmerman snuffed out much of the plays at midfield and diverted a heavy break down the middle of the box in the 11th minute. On the other end, Julio Cesar Dominguez and Johan Vasquez frustrated Pepi multiple times.

While the pressure picked up in the second half, Mexico still found it frustrating to penetrate the United States defense. The physicality soon manifested in shoving matches—a squabble in the 68th minute produced multiple yellow cards, including one that will shelve McKennie in the next matchup against Jamaica.

However, the increased pressure finally produced results. Five minutes after his substitution into the game, Pulisic got on the receiving end of a Weah cross to head a goal past Guillermo Ochoa in the 74th minute to make it 1-0. The celebration itself became instantly iconic, as Pulisic pulled up his jersey to produce a “Man In The Mirror” message, an apparent response to a quote from Ochoa himself.

While Mexico had their chances, the defense finally let them down late in the game. McKennie’s approach in the box in the 85th minute led to the ball pinging off legs and back to the Juventus midfielder. He rolled a shot past Ochoa’s right to get the score to 2-0.

The final minutes led to some more anxiety, as a second yellow card to Miles Robinson produced a late red card in the 89th minute. Robinson will miss the next game against Jamaica, as well. The squad still stood their ground and almost tacked on a third goal in stoppage time, keeping the clean sheet for the United States.

The win puts the United States at the top of the table with a higher goal differential than Mexico, despite matching them on points and wins. Mexico falls to second place in the table with a difficult matchup against Canada waiting in the wings.

The USMNT will now travel to Jamaica for the next game in the Octagonal on Tuesday, while Mexico will travel to Edmonton to take on the Canadian national team. Jamaica drew with El Salvador 1-1 on Friday, while Canada defeated Costa Rica 1-0.