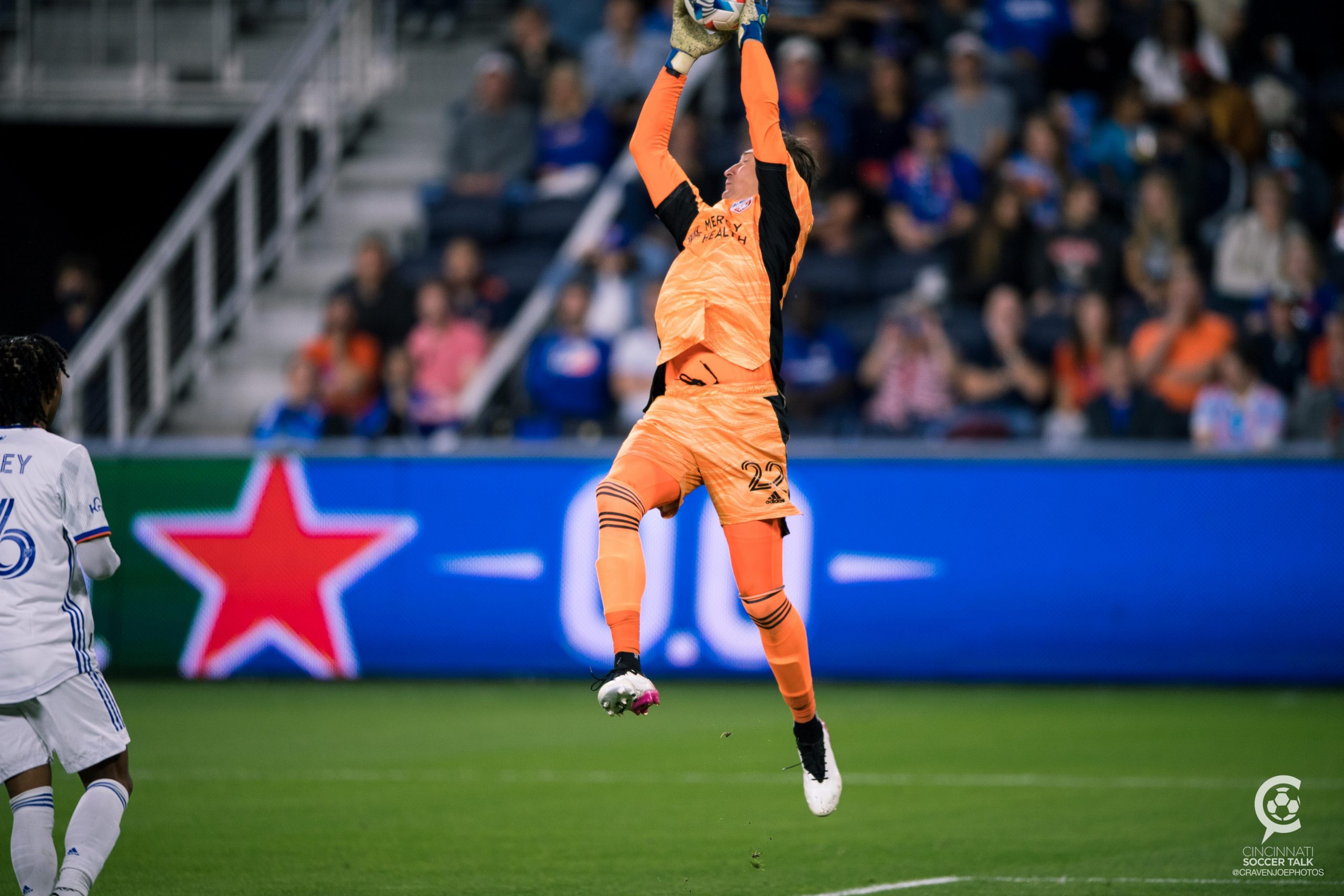 FC Cincinnati lost its fourth match to Inter Miami on Saturday night in Fort Lauderdale, extending its losing streak to nine matches. Though FCC competed well for the first 45 minutes, the Orange and Blue crumbled in the second half, allowing four unanswered goals.

Miami opened the scoring in the sixth minute. Lewis Morgan switched the play from right to left, finding Rodolfo Pizarro on the run. Pizarro caught up to the ball before it went out of play and crossed to an unmarked Federico Higuain in the box, who turned a cross from Rodolfo Pizarro beyond a diving Tyton.

Brandon Vazquez leveled the score in the 21st minute with a header off a nicely crossed ball from Zico Bailey, his second assist in as many matches.

FCC nearly added a second in the 37th minute. Matarrita fizzed a cross between the penalty spot and the six-yard box but it was just out of reach of Brandon Vazquez. At the other end, Rodolfo Pizarro fizzed a shot laid off by Gonzalo Higuain just wide of Tyton’s right post.

At halftime, statistics showed a pretty even match. The Orange and Blue attempted 8 shots, with 5 on target, accounting for 0.9 xG. Miami countered with 9 shots, though just one on target for 1.2 xG.

Miami took the lead in the 53rd minute off a Higuain brother connection. Federico received the ball on the right wing and hit a cross towards his brother who beat Caleb Stanko and put his head past Tyton.

FCC had a look to level the score again in the 60th minute. Acosta Cruyff-turned through two Miami defenders at the top of the box before playing Barreal into the box. Barreal struck his shot well but unfortunately Nick Marsman had it covered.

Indiana Vassilev, who had replaced Federico Higuain, made it 3-1 in the 69th minute, beating Tyton at his near post after being played into the box by Pizarro. Lewis Morgan added a fourth for Miami in the 74th minute, coolly firing past Tyton after finding acres of space behind FCC’s backline.

Morgan looked to double his tally in the 81st minute, blasting a shot past Tyton from the left side of the box after being played through a high FCC backline by Gonzalo Higuain but a VAR check reversed the decision. However, essentially immediately after the restart of play, Julian Carranza received a through ball past FCC’s backline to score Miami’s fifth of the night.

FCC looked to be denied a penalty as the ball struck a Miami arm inside the box on a shot from Alvaro Barreal but VAR did not intervene in this situation. Neither FCC nor Miami threatened much in the last minutes of the match though Allan Cruz earned a straight red card for violent conduct in the sixth minute of stoppage time for what looked like a slap to the back of the head of a Miami player on the run.

After a competitive first half, the FC Cincinnati was outclassed after halftime. Some of Miami’s late goals were products of FCC pushing to get back in the match but the Orange and Blue just made it too easy for Miami. Outside of seeing Kyle Scott and Calvin Harris get substantial minutes, just about the only good thing from the second half was that FCC did not wait to concede the game winning goal until late in the match.

Cincinnati will be back in action at TQL Stadium next Wednesday, October 27, against Nashville SC.