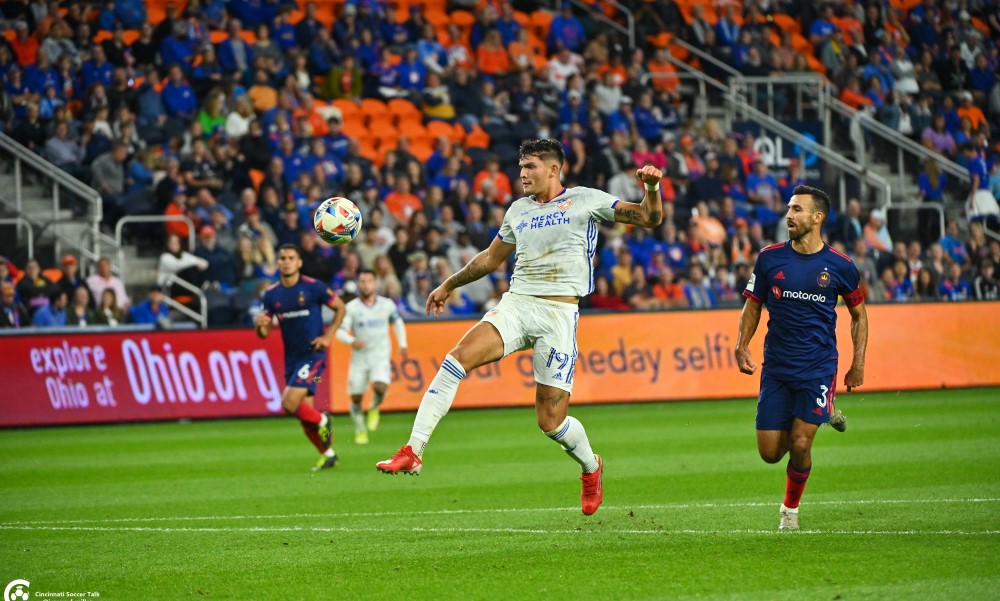 FC Cincinnati interim head coach Tyrone Marshall walked into the media room after Wednesday night’s 4-3 loss to the Chicago Fire with a look of bewilderment.

CINCINNATI – FC Cincinnati interim head coach Tyrone Marshall walked into the media room after Wednesday night’s 4-3 loss to the Chicago Fire with a look of bewilderment.

“What is going on?” Marshall said, shaking his head. “Do we need someone to sprinkle something on the field? Maybe we need a priest to come bless the place. There’s some bad JuJu in this place.”

Any hopes the Orange and Blue had of avoiding a third straight last place finish in the Eastern Conference vanished in a hail of goals at TQL Stadium, but it wasn’t for a lack of effort. FCC fought back from an early two-goal deficit, then again with an equalizer in stoppage time, only to suffer yet another heartbreaking defeat.

After two close-range strikes from Fire striker Robert Beric stunned them early, FCC got back into the match with goals from Lucho Acosta and Brandon Vazquez.

Tyler Blackett’s first goal for FCC tied the score in stoppage time, but Luca Stojanovic’s rocket from outside the box won it for Chicago.

It was the fifth one-goal loss for FCC under Marshall.

“Gut-wrenching, heartbreaking,” Marshall said, reaching for some words to describe what he called the craziest match he’s been involved in since college. “It was really emotional. Like a roller coaster.”

Of course, there’s a big picture element to all this. Marshall and his players are all auditioning to be back next season.

More than two weeks into Chris Albright’s tenure as FCC’s general manager, everything about the club’s soccer operations is under scrutiny, most notably the first team roster, as he prepares for an important offseason.

Marshall is trying to get as much out of his players as possible over the final two weeks of the season and possibly, by some miracle, avoid a third straight last place finish in the Eastern Conference. That seems unlikely now, but there was a determination with the club on Wednesday.

“The GM’s here now,” Marshall said. “Everyone is still being evaluated. I tell the guys to show them you want to be here next year. Show the fans. That’s what we saw tonight.”

FCC’s squad was largely intact for Wednesday’s match, but they were without Yuya Kubo with an ankle injury.

The Fire have been one MLS squad that the Orange and Blue have held their own against with two wins, two draws and a loss in five meetings coming into Wednesday.

Chicago was 1-11-2 on the road coming in to Wednesday’s match, but they notched a somewhat surprising 2-2 draw at New England on Saturday with an equalizer in the 88th minute. The Fire were tied for the most losses on the road in MLS.

Vazquez who made his second start of the season alongside Brenner, had the game’s first scoring chance when his header off a cross from Matarrita was tipped over the bar by Fire keeper Nicholas Slonina in the sixth minute.
Moments later, Brenner’s shot forced a comfortable save.

But as they have at times throughout this season, the missed chances doomed FCC.

In the 14th minute, Beric buried a shot from close range off a deflection to put the Fire ahead 1-0.

Three minutes later, disaster struck when Przemyslaw Tyton had a shot bounce off his hands on to the waiting foot of Beric who tapped it in for a 2-0 lead.

Acosta netted his seventh goal of the season off a headed cross from Vazquez who took the initial delivery from Zico Bailey. Some quality team play got FCC back within a goal in the 28th minute.

Less than 10 minutes later, Matarrita fed Vazquez who was able to corral the pass and slip a shot past Slonina to tie the score 2-2. It was his second goal of the season.

“Hitting the back of the net felt so good,” Vazquez said. “It’s been a long season, but I’ve stayed patient.”

The score remained tied 2-2 at halftime. But in the 71st minute, Joe Gyau, who’d come on as a substitute earlier in the second half, committed a foul on the edge of the box to hand the Fire a free kick.

Alvaro Medran delivered, tucking his shot into the upper left corner of the goal to put Chicago ahead 3-2.

FCC finished with a flourish, only to have Stojanovic bury a dagger in the waning seconds.

“That just incapsulates the season for FC Cincinnati,” Marshall said. “The boys worked so hard all week. Defensively we could be better. But we deserved more.”