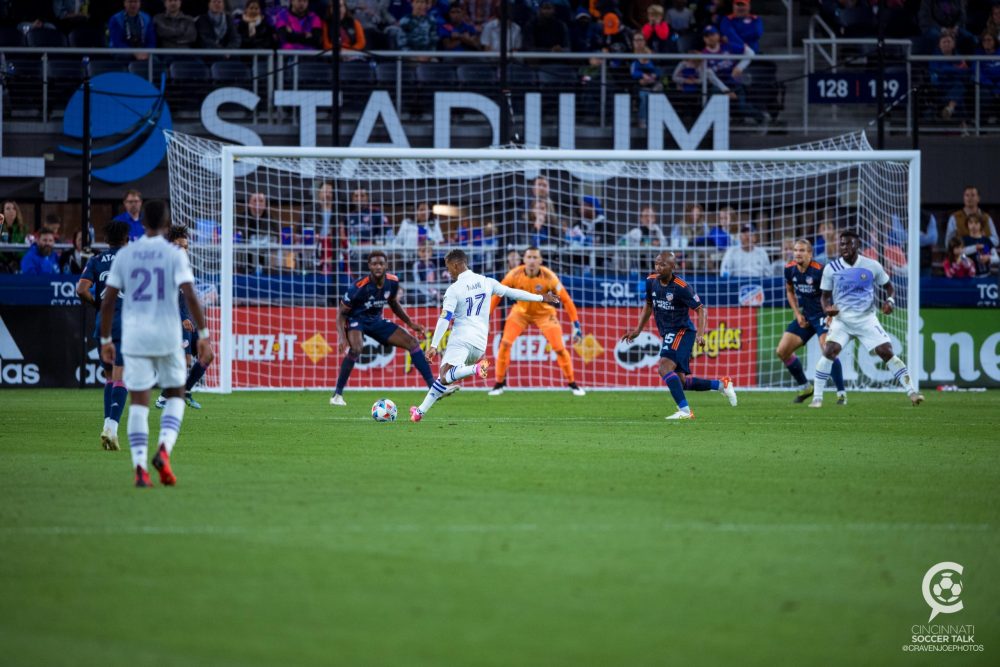 FC Cincinnati fall at home again to Orlando City SC. The club continued its early match struggles and couldn’t score after going down one.

Each year a satistic is released that proves MLS the leader in home-field advantages. Out of every pro sports league in America, an MLS club has a statistically better chance of winning at home. Well, every club outside of FC Cincinnati. Somehow the league is able to claim that crown despite the anomaly that is FC Cincinnati dragging their average down. In fact, FC Cincinnati has only won a single match at TQL stadium since it was built and that was against, at that time, league worst Toronto.

Again, FC Cincinnati found themselves digging out of an early hole. The shot by Urso was solid but stoppable. Orlando’s only goal of the night came via a very far-out shot that skirted the ground the entire way. It was a ball that on re-watch, Titi had time to save. There was enough time, it wasn’t a blown assignment just had curvature. The shot itself carries a low XG rating from that range. Stats don’t matter though, balls in the net do. FCC’s defense let one from way outside the box get through. Titi either thought it would be stopped or never saw it coming till it was too late. After that moment, the club found itself in a very familiar situation. Down at least one goal and working on finding a way back. Things got more predictable though. Acosta fell a bunch looking for a call, Brenner waited for balls at his feet and defenders tried their best to play up the wing.

The Goal That Wasn’t

Orlando seemed ok laying off the ball for the majority of the match. They had their goal and as the away side, nothing to gain by being the aggressive side. FC Cincinnati’s best non-scoring chance came in the 24th minute from Jeff Cameron who was in the perfect spot at the perfect time. The ball deflected to him inside the center of the box and he only had a split second to react and put it on the frame. He made the most of that small moment but so did Orlando’s El Pulpo. In what could only be a raw instinct save, El Pulpo got just enough of the ball to deflect what would have been an FC Cincinnati equalizer. Tough break for Cameron who did everything right on that play. Later Acosta did put the ball in the net but not before it bounced up and hit his hand. That goal was voided for the error.

The Deadlock and Questionable Call

Halftime came and went without much in the way of drama, FC Cincinnati made some changes, Kyle Scott ended up getting his first minutes, Cruz was put on at the half and Zico Bailey got a good amount of playing time before subbing out. Those were the most notable moment in the second half until the game when into extra time. Of course, both clubs made a few shots in that time but nothing worth the reader’s time. The big action of the second half came via an extra time VAR call. A ball was served up and into the box for Vasquez who took an arm to the face before it arrived. After a moment of on-field waiting, the head official got the call to review it via VAR. What looked like a sure bet for home fans never materialized. The official determined it wasn’t enough and didn’t give FC Cincinnati the PK call. It was a very questionable call and one that is tough for an official to give that late in a match. FCC failed to create enough chances and tried to rely on officials to help them out.

“The boys, everyday they come into work. They’re in a really tough situation, going through a coaching change, having a new staff come in and try to implement some ideas to get their minds back to where they need to be in terms of their focus; it’s a tough task. They’re trying everyday, they’re coming out on the pitch and putting the work in. Like you saw tonight, the ball could have bounced either way and we walk out of here with three points or even one point. Sometimes when you’re in a funk, we tend not to get those calls. The message to the boys is always consistent; keep improving the energy level and that’s what they’ve been doing.”

Kyle Scott on his debut – “I thought tonight we were the better team again. I think we had a number of chances and a decision, I haven’t seen it, but the decision at the end goes against you, so I feel like the team’s been unlucky. With a little luck, I know you ride some luck, and sometimes you get more lucky but from the games I’ve watched when I’ve been here it’s building up a pattern where we just aren’t getting as lucky as some other teams you know. And in football, you need luck, so without luck, sometimes it just keeps going against you; and against you. But like I said, the main thing is, from now until the end of the season, we find a way to win some games, and then we move forward for next season.”