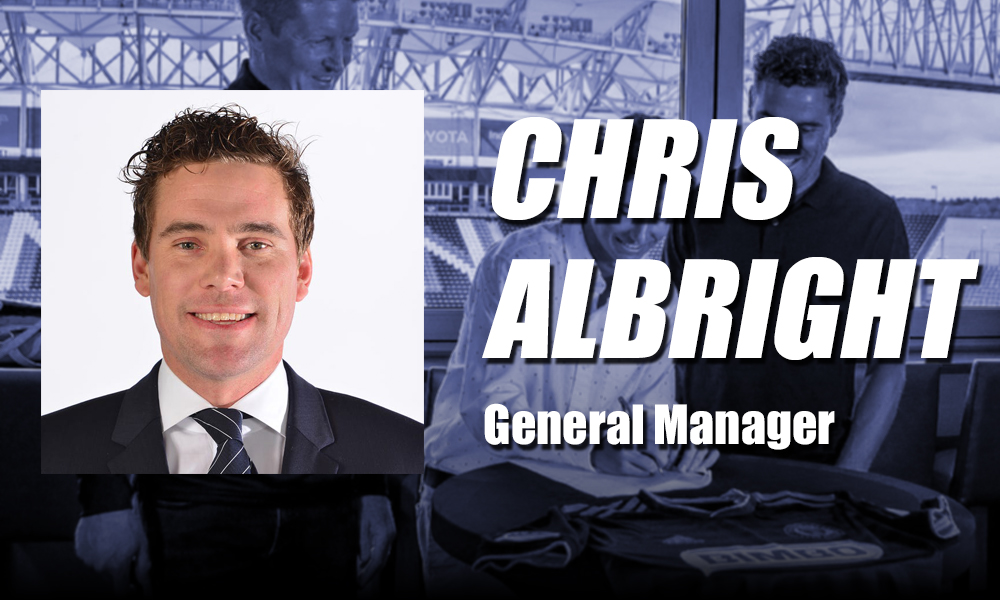 “Our search for our next general manager was extensive,” said FC Cincinnati president Jeff Berding in the club’s press release. “Our new GM was going to be someone who knew what was required to win in Major League Soccer, experience that was non-negotiable. Delivering on that requirement, we are delighted to have found the best person for the job.”

“Chris’ experience in Major League Soccer and his track record of success are impressive,” said managing owner and CEO Carl H. Lindner III. “His ambitious, energetic character is emblematic of the type of leader we sought to bring in. We are thrilled to have him lead our soccer organization, and we are confident that he will fulfill our goals, and help make Cincinnati a championship city.”

The move was first reported by Sam Stejskal and Paul Tenorio of the Athletic in a story mentioning the two parties were negotiating toward a contract. On Thursday afternoon, The Post Cincinnati reported that the deal was completed.

Albright, 42, joined the front office of Philadelphia after a 15-year playing career in Major League Soccer. The Philadelphia-native has been highly regarded in MLS circles including rave reviews of his recruitment of players.

“It’s an honor to be the general manager of FC Cincinnati,” said Albright in the release. “This is a club with incredible supporters, top-of-the-league facilities and resources, and a hunger for success. I would like to thank Carl [H. Lindner III], Meg Whitman and the ownership, as well as Jeff and everyone who has trusted me to lead this club to achieve the goals we have set. I am committed to bringing all of my knowledge and experience to the table to make FC Cincinnati a championship club. I look forward to meeting the team, the staff and all of the fans, and I can’t wait to get started.”

Beginning in 2014 Albright began to oversee player recruitment under former Union CEO Nick Sakiewicz. Following his dismissal, Albright was in charge of Philly’s domestic acquisitions and the academy under current US Soccer sporting director Ernie Stewart. The former right back’s career began to really take off in 2018 when Ernst Tanner was installed as the Union’s new sporting director.

According to a piece in The Athletic, one head coach deemed that Albright operates in “a class of his own” among organizational seconds-in-command. That same article also stated under Albright’s guidance, Philadelphia has been MLS’s top club in terms of spend efficiency (point per dollar) for three seasons running, according to a Union spokesperson.

Philadelphia made the playoffs in four of Albright’s seven full seasons. In what would be a career highlight, the Union won the 2020 MLS Supporters Shield in a season which saw the club also make the MLS is Back tournament semi-finals.

“Chris has been extremely focused and efficient in accomplishing the club’s goals and has set the standard high when it comes to securing players and managing the salary cap,” said Sporting Director, Ernst Tanner in the Union’s release. “He has an incredible grasp of the MLS roster rules and regulations that he introduced me to when I first arrived. I’m grateful for our collaboration over the last couple of seasons and wish him the best in Cincinnati.”

Key additions added in Philly under Albright include Alejandro Bedoya, Jamiro Monteiro, Jose Martinez, Ilsinho and Bořek Dočkal. Their success is impressive as the Union as 25th of 27 teams in salary spent in 2021. The also are not know for high transfer fees as their club-record $2 million transfer to make Monteiro’s loan a permanent deal ranks well below the deals for Luciano Acosta, Isaac Atanga and Brenner.

Prior to his time in management, Albright had an outstanding professional career which included time with DC United, LA Galaxy, New England Revolution, New York Red Bulls and finally with the Union. The forward turned right back would go on to win three MLS Cups, one Supporters Shield and one US Open Cup. In 2005 Albright was named to the MLS Best XI while with the Galaxy.

He experienced international success playing for the US men’s national team including 22 caps and being named to the 2006 FIFA World Cup squad.

Albright will have a tough hill to climb as he will need to account for many roster budget constraints over the next year. The fanbase will expect improvement upon the past three seasons, yet he will have to deal with expensive cap hits including Kamohelo Mokojko, Yuya Kubo, Allan Cruz and potentially soon-to-be senior roster budget player Kenneth Vermeer.

The young GM will also need to encourage key pieces like youngsters Alvaro Barreal and Gustavo Vallecilla to stay “bought-in”. Albright will have seven games to evaluate the group including interim coach Tyrone Marshall. Will Marshall do enough to earn the head coaching spot or will Albright bring in current Union assistant coach Pat Noonan as the clubs new manager?

Stejskal and Tenorio also reported that Albright was expected to add Union assistant technical director Kyle McCarthy to his front office in Cincinnati.

While Cincinnati Soccer Talk can confirm through league sources that the position was offered to Seattle Sounders sporting director Craig Waibel last week, fans shouldn’t be discouraged with the results of the search. Albright has significantly more league experience than his predecessor and is already appearing to execute his plan.

Early on in his career in Philly, Albright did have some failures, but has had more successes recently. Fans would hope that ownership will allow Albright to make a couple big splashes this season with one DP spot likely open. There must be patience shown as the first-time GM will need to recalibrate the roster and likely will have some tough contracts to get rid of or sit on in 2022.

While the temptation to look ahead for incoming players will be great for FCC fans, Albright does have one role he must fill. Head Coach. Hopefully his connections will allow him to lure an attractive option to provide stability in a role that has been a revolving door.