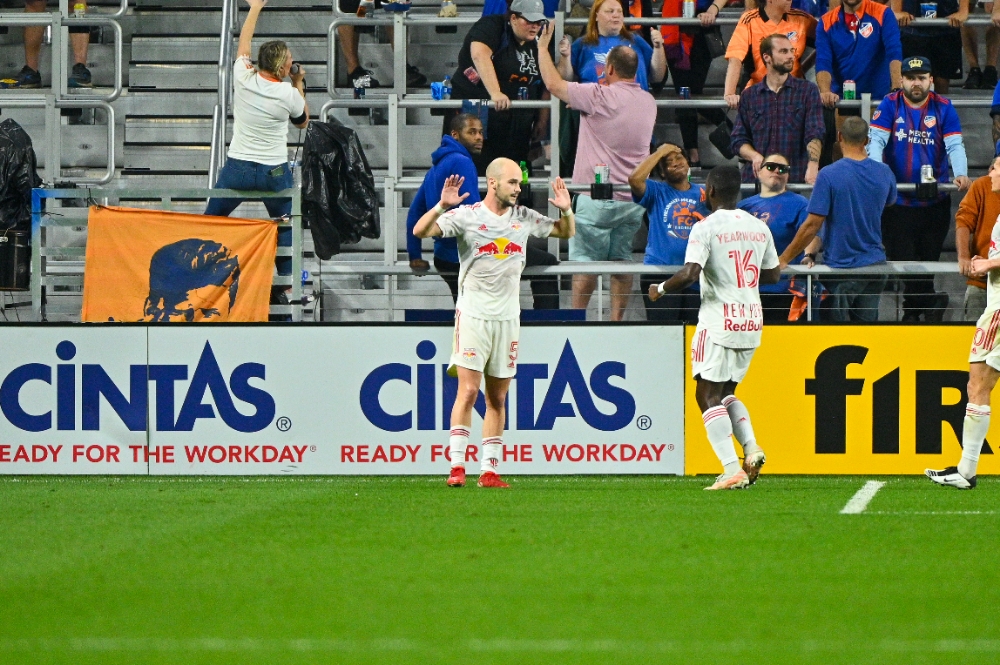 FC Cincinnati (4-8-15, 20 points) were unable to stop their skid, losing their fifth straight match in a row. This time, they were unable to silence New York Red Bulls (9-7-11, 34 points) on Saturday, falling 1-0 in a highly-defensive battle. The match was the first for ex-FC Cincinnati players Frankie Amaya and Andrew Gutman in the new stadium, and both saw significant minutes in a match that felt more anxious from a fan’s perspective.

After the 3-2 loss in Toronto midweek, coach Tyrone Marshall chose to roll out a 4-2-3-1 squad with significant adjustments the squad. With Gustavo Vallecilla out due to yellow card accumulation, Tyler Blackett got his first start for FCC, while Caleb Stanko, Haris Medunjanin, and Nick Hagglund returned to the Starting XI. Brandon Vasquez was initially given a rare break from the lineup, but he returned to the bench after Florian Valot was a late scratch in warmups.

New York’s answer in the lineup was to unveil a Starting XI with Amaya making his eighth start of the year. The former FC Cincinnati first-round draft pick in 2019 was dealt in the 2021 preseason and hadn’t started a match since July 22. Gutman also joined Amaya in the starting lineup, both making their first appearances in Cincinnati for the opposition.

Much of the first half involved New York dictating pace, despite not dictating possession. The Red Bulls fired 12 crosses to FCC’s five, but Cincinnati managed some deflections to rattle New York’s attempts. An early goal in the 2nd minute by Patrick Klimata was waved off, the offside call warmly applauded by the crowd.

For much of the first 35 minutes, New York dominated the offensive push. Klimata had Przemyslaw Tyton beaten in the 31st minute, only for Hagglund to clog the goal and deflect the shot out. A free kick by Omir Fernandez in the 32nd minute almost pierced the defense, but Tyton sprawled to his right with a fingertip save. In all, Tyton was solid with three saves in the first half.

While their counter was often snuffed out, FC Cincinnati finally found gears late in the first half. Luciano Acosta got his head on a Ronald Matarrita cross in the 43rd minute, but only for Carlos Coronel to get a hand on the ball to tip it over the bar.

Despite the 0-0 halftime score, the advantage was still heavily in New York’s favor. Much of New York’s possession was in FC Cincinnati’s half of the field, and they led the half in shots (12-2) and shots on goal (4-1).

FC Cincinnati started to find their legs once New York went for a triple substitution at the half and ended Amaya’s day early. Brenner and Acosta started to find more connection with Yuya Kubo and Isaac Atanga, but the final feeds were not leading to opportunities. A Kubo shot at the 55th minute was as close as the offense could get before the inevitable outcome.

While this was considered in some cases to be the “Amaya Revenge Game”, this was Gutman’s day. Cristian Casseres Jr. threaded a pass in the 73rd minute that got past Hagglund and the trailing Alvaro Barreal. Gutman controlled the pass in the box and skirted a left-footed shot to Tyton’s left to make it 1-0. The goal was Gutman’s second of the year.

While FC Cincinnati had some chances to level the score, New York did its work to clog the box and parry the attack. The Red Bulls manages to squeeze yellow cards out of FC Cincinnati in the end and ate the clock to take all three points.

The Red Bulls now sit in ninth place and five points from the playoff line. FC Cincinnati has lost five in a row and remain in the bottom of the table with seven games left to play. The Orange and Blue will try again against a quality opponent next Saturday when the Philadelphia Union come to town.