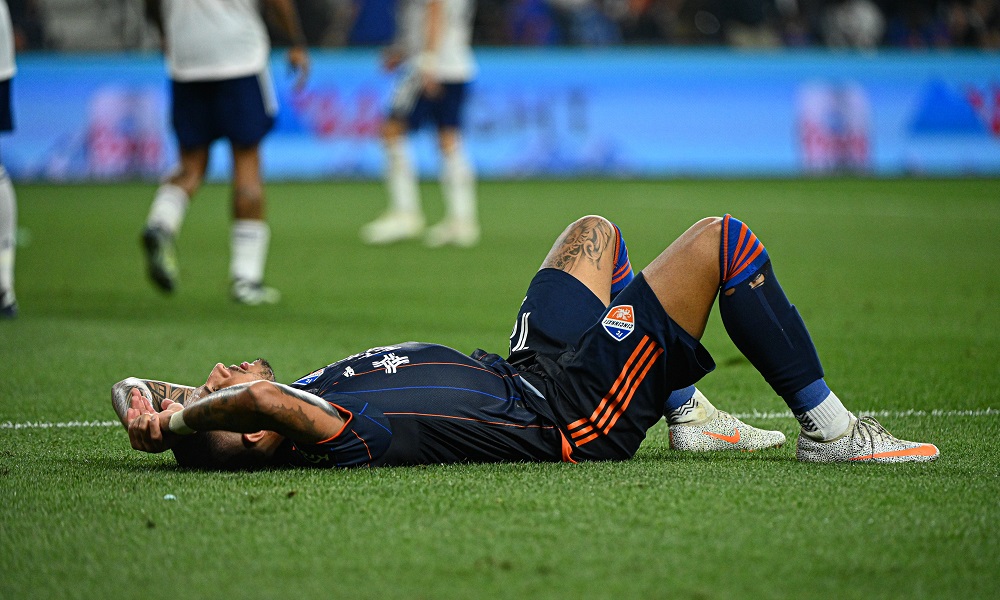 FC Cincinnati faced off against the New England Revolution on the road Saturday, ultimately falling 4-1

FC Cincinnati faced off against the New England Revolution on the road Saturday, ultimately falling 4-1. FC Cincinnati, sitting in the 13th position, is trying to stay off of the bottom of the table. New England, in contrast, is arguably the best team in the league. The Revolution sit comfortably in first place, 15 points above the next team in the table. Some might have expected FC Cincinnati to adjust its strategy and set up more defensively, but coach Jaap Stam set up the team in its usual 4-3-3 and took on the Goliath of MLS head to head.

The strategy did not pay off. FCC gave up three goals in the first 30 minutes.

“It’s difficult to win a game when you give away the game in the first half,” said Stam, clearly laying the blame on his players. “If you give them balls away, in transition, they (New England) become very dangerous and we’ve seen that in a couple of situations when they scored goals. We gave away too much space, they utilized it very well but that’s why they are top of the league. We needed to do a lot better.”

Stam adjusted the team late in the first half into a 5-3-2, but the damage was done.

When the teams took the pitch in the second half, FC Cincinnati looked to be the dominant team. The Revolution were obviously comfortable with their three-goal lead. FCC pressed and was rewarded early in the second half with a goal from Brenner.

The goal gave the Orange and Blue some much-needed hope. “Obviously the goal gives you a lot of confidence,” said Luciano Acosta (translated from Spanish). “We felt that it changed the game, we felt that we had the momentum and ability to get it to 3-2 and go from there.”

Where the goal gave FC Cincinnati hope, it seemed to wake up New England, who had been giving FC Cincinnati control of the game. New England reasserted itself, and seven minutes later returned its three-goal lead. The goal was crushing for FCC as Acosta pointed out.

“Unfortunately, an error and lapse in concentration made it 4-1 and from there it is really difficult to come back,” he said. It’s unfortunate.”

The game played out, but it was already over.

Fans who are looking for positives will see that statistically, FC Cincinnati and New England were fairly evenly matched. They had even possession, similar stats for passing accuracy, shots and shots on goal. Defensive errors aside, the statistics don’t match the quality of output from the team, and Stam could see that as well.

“A lot of times we’re very close to getting a win, but sometimes we can’t because we can’t pull the trigger at times,” Stam said. “We made it too easy for the opposition (Saturday), and that is the thing that we need to look at ourselves to be honest.”

Acosta probably summed up the game the best: “I thought that there were some good things from the game, but at the end of the day, we’re going to come away from this one upset and angry at the result.”