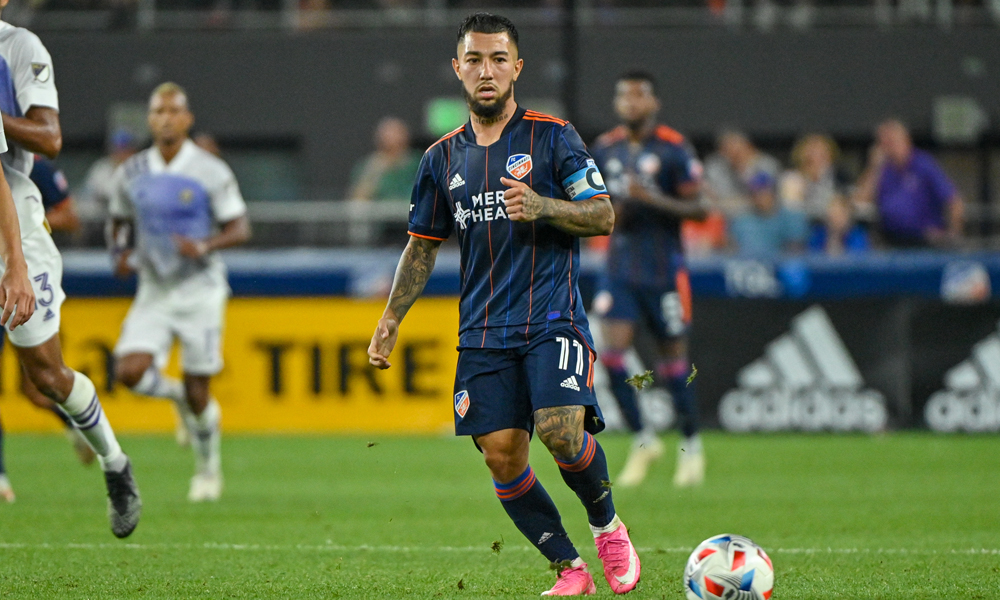 A lot has been made about the Jaap Stam’s lack of substitutions and squad rotation. How does FCC compare to other teams around MLS?

Jaap Stam’s seeming unwillingness to use his full compliment of substitutions or to rotate the squad unless forced to has been a major talking point in the FC Cincinnati fanbase in recent weeks. Anyone who has regularly watched the Orange and Blue this season could tell you Stam leans heavily on a few key players. I wanted to try to figure out how true that was, and, also importantly, how it stacks up with the rest of the league.

So far this season, 26 FC Cincinnati players have seen game action. Four teams have used 29 players, the most in MLS, while the New England Revolution and Austin FC have used just 22, the fewest in the league. Digging deeper, however, it’s clear Stam relies on a core of players more than most teams in the league. More than that, Stam has asked those players to contribute heavily on both sides of the ball.

Using Football Reference data for minutes played, five FC Cincinnati outfield players have been on the field for more than 80% of the team’s total minutes in 2021. Joe Gyau (99.9% of total minutes), Brenner (95.4%), Yuya Kubo (85.9%), Luciano Acosta (87.3%), and Alvaro Barreal (80.4%) have been near-permanent fixtures on the field in the first half of the 2021 season. These numbers don’t take into account games missed for suspension, injury, international duty or other circumstances. For instance, Geoff Cameron, who has played every minute he was available for, and FCC’s Costa Rican duo of Ronald Matarrita and Allan Cruz, who missed multiple games away at the Gold Cup with Los Ticos, do not meet the 80% minutes threshold despite also being heavily utilized by Stam.

In the broader context of MLS, 87 outfield players have played more than 80% of their team’s minutes in 2021. FC Cincinnati’s five players over that threshold is not a league high – the Philadelphia Union have seven players over the 80% threshold – but it’s one of the higher totals in the league. 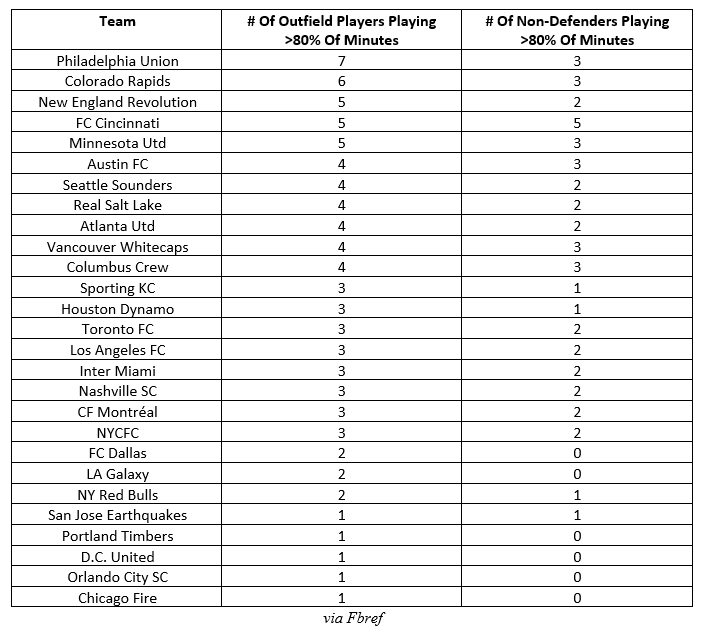 Unsurprisingly, nearly half of the players meeting the 80% mark, 40 of the 87, are defenders. With the exception of Joe Gyau, who very well could exclusively play as a winger moving forward, none of FC Cincinnati’s players meeting the 80% minutes criteria are defenders. No team other than FC Cincinnati has more than three non-defenders playing that chunk of total minutes. In fact, six MLS teams have zero non-defenders playing more than 80% of their total minutes.

Jaap Stam’s reliance on big minutes from a small group of midfielders and attacking players is a clear outlier in MLS.

Unfortunately, we don’t have access to tracking data for distance covered on the field. What we do have is information about pressures. A defensive system based on pressuring the ball leads to more running. Players who actively pressure the ball will almost certainly run more than players who do not. So far this season, Barreal, Kubo, Brenner, Acosta, and Gyau combine to pressure the ball just over 104 times per 90 minutes.

For a team that generates lots of quality chances from turnovers under pressure, tired legs could come back to haunt FC Cincinnati in the second half of the season, especially without cooler temperatures on the immediate horizon. If Stam continues to ask these five players to carry the vast majority of the offensive load as well as be very active in the press, we might just be in for a drop in the quality of play from FCC’s front four.

Jaap Stam has gone public with his feelings about available depth on the FC Cincinnati’s bench. What’s unclear now is whether Stam will ever believe a rested Isaac Atanga, Florian Valot, or Brandon Vazquez offers more on the field than a tired Alvaro Barreal, Luciano Acosta, or Brenner. Even if there’s a drop-off in quality, it might be worth rotating the squad to ensure FC Cincinnati’s most valuable players can finish the season strongly. FC Cincinnati’s sport science department surely has reams of data about distance covered and how the players are recovering between matches. Still, the way Stam has utilized some of his key players is not the norm in MLS.