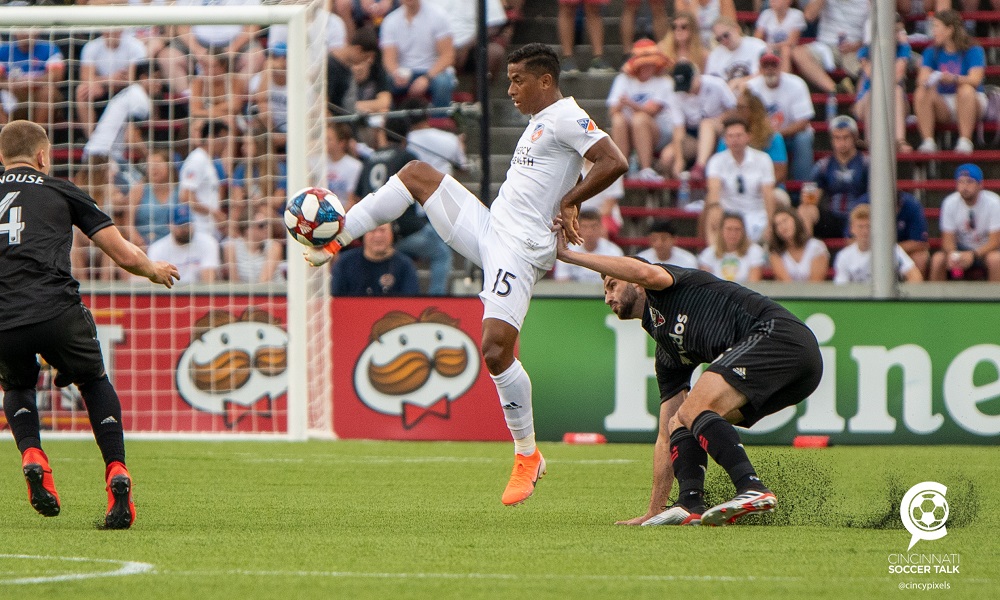 FC Cincinnati continues its quest for its first win at TQL Stadium on Saturday against D.C. United.

FC Cincinnati is back home this weekend, looking to change its trajectory against D.C. United. FC Cincinnati hasn’t won a match in the month of July. Since the back to back wins in June that lifted Cincinnati off the bottom of the table, the Orange and Blue have struggled to get results, giving up significant leads to either draw or lose multiple games. It is unlikely to get much of a home stadium boost. FC Cincinnati hasn’t won a game at TQL Stadium since it opened. In fact, FC Cincinnati has never beaten D.C. United. Despite this, there is hope. FCC hasn’t lost at home this month and gets back some key players. D.C. United on the other hand, has been mixed lately and is still missing several key players.

Ola Kamara has only played in three of D.C. United’s July matches, but he netted a goal every time he played. Look for him to either start or come in as a sub looking to make an impact. He has seven goals to date for the 2021 season, which matches the seven goals he scored in the 2020 and 2019 seasons combined.

Bill Hamid and the D.C. defense have been struggling lately. They earned a clean sheet in their match last weekend against the New York Red Bulls but had given up seven goals in their previous four matches. Though Cincinnati was blanked in its  last match by Nashville’s stalwart defense, the Orange and Blue netted eight goals in their previous four matches. There should be plenty of opportunity for FCC to score.

Cincinnati’s midfield has struggled in the last several games. Having Allan Cruz back from international duty should help. He didn’t get a lot of playing time for Costa Rica, which could be a concern regarding his touch, but he appears to be fit and healthy. The question is how well he will slot back in beside Yuya Kubo and provide another, much-needed engine in the center of the pitch.

D.C. United and FC Cincinnati have four MLS matches in their history. Overall, the head-to-head record is 0-2-2 for FC Cincinnati with D.C. getting the best of the Orange and Blue.

In addition, Franko Kovačević and Tom Pettersson have departed the club, but Cruz and Ronald Matarrita both return from the Gold Cup after Costa Rica lost to Canada last weekend.

Caleb Stanko and Gustavo Vallecilla are both one yellow card from being suspended from their next match.

Highlighting D.C. United’s missing players is Edison Flores (designated player) who was sidelined in May with a hamstring injury. He wasn’t in the 18 as of last week. Also, Paul Arriola (designated player) and Donovan Pines both are away for international duty.

For “in-the-know” information, listen to March to Matchday, where Cincinnati Soccer Talk discusses upcoming matches with media sources from the opposition. On this week’s March to Matchday, Cheyenne Foster from Between Clean Sheets stops by to preview Saturday’s matchup between FC Cincinnati and DC United.

For tactical breakdowns and discussions, check out Talking Tactics with Coach Brad Gough and Justin Hoyte. This week they break down the 3-0 loss to Nashville and who’s to blame for FC Cincinnati’s dip in form.