What do we know about Ft. Wayne?

Ft. Wayne lost its last match to South Bend on Saturday, 4-1. It only has one win on the year. It has five draws though, which tells you it isn’t just rolling over for teams.

Its leading scorer is Noe Garcia. He has five goals on the season. Garcia, a Puerto de la Cruz, Canary Islands, native, plays his college soccer for Indiana Tech. The small NAIA school plays in the Wolverine-Hoosier Athletic Conference.

Does Kings Hammer go back to its original formation?

Kings Hammer found itself down to rival Dayton before the match was postponed due to storms on June 30. KHFC was running a newer formation for it at the time, a 3-5-2. While the formation seemed to look strong against Toledo at the end of the previous match, scoring four goals, against Dayton in the 37 minutes and change that were played the team looked to be sitting back too far defensively.

This is the first and only match against Ft. Wayne. It wouldn’t be shocking to see Kings Hammer return to the 4-3-3 as Ft Wayne has given up a good number of goals this season. 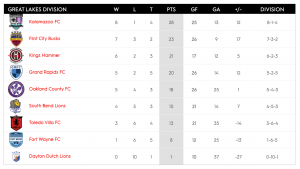 Tickets are still available for today’s 7 p.m. match.  The club hopes to make Xavier’s Corcoran Field one of the hardest places to play in USL League Two.

Use the code CSTKHFC to save yourself 10%.