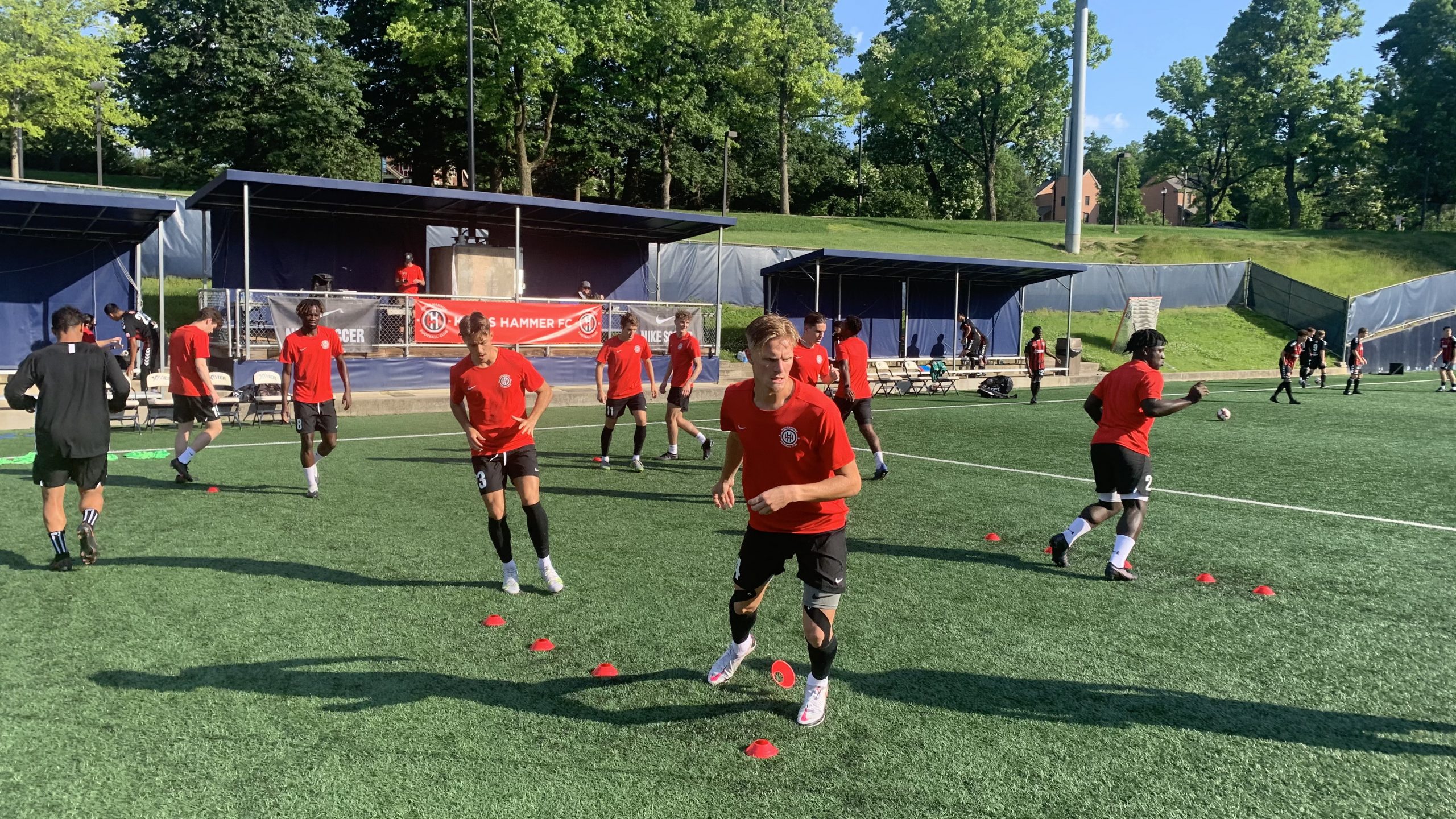 It seems that Kings Hammer FC can only win matches by one goal against Oakland County. While the 3-2 win gives KHFC three more points, the coaching staff didn’t leave the pitch happy on Father’s Day.

Kings Hammer’s coaching staff expected the match to end 3-1 after they had dominated the entire second half. This win was a huge confidence boost for the Kings of the Queen City as Wednesday night is probably their most important match of the season as they head to Kalamazoo, Michigan, to take on the first place Kalamazoo FC.

Robinson, Erhardt, and Ennin, oh my

KHFC seemed to figure out what it needed to do to create more chances on offense in this match.  After falling behind early, on a goal by OCFC’s Kevin Buca, the lightbulb seemed to turn on for the Kings Hammer offense.

Sam Robinson, the former Cincinnati Bearcat and member of this season’s Northern Kentucky Norse, has been searching to get his name on the stat sheet all season for Kings Hammer FC. He’s played well.  He’s brought a spark off the bench in a number of cases, but he’s been unable to find the back of the net going into the match against Oakland County. Robinson finally broke through against Oakland County FC and earned his first goal of the season in the 42nd minute. Robinson’s goal brought the score even before the half.

Luka Erhardt is a quiet leader. He’s almost always in the right place at the right time. Erhardt was patient, and he stood quietly awaiting a rebound only to have a pass come back to him from Marcelo Jones in the 53rd minute. A clean strike put Kings Hammer in the lead and it would hold on to the lead from here until the end of the match.

When Timmy Ennin is on the field, he’s a workhorse. Who knows how the first Kalamazoo match ends if he wasn’t sent off for dissent in the first matchup. The header that Timmy scored in this match against Oakland County was off an extremely well-executed set-piece delivery by Danny Barlow.

Hats off to Oakland County FC. As the match seemed to be getting a little out of hand, it clawed its way back into it. Its supporter’s group made enough noise that the event staff started asking questions. The purple and white didn’t quit until the final whistle. Ultimately, even with Dwight Hooks scoring Oakland County’s second goal in the 89th minute, Kings Hammer held it off and come away with the victory.

Arguably the most important match of the season is on Wednesday night. A win at Kalamazoo on Wednesday puts Kings Hammer FC in a prime position for a Great Lakes Division title. A Kings Hammer loss could almost lock it up for Kalamazoo, pending an end-of-season meltdown.

Can you believe it?

Heading into this season and looking at teams in the division, there’s no way that you wouldn’t have expected Flint City and Dayton to be competing at the top of the table. Kings Hammer has an opportunity to win a division title in its first season in existence.

For the most part, KHFC controls its own destiny. A win on Wednesday Night would split the season series with Kalamazoo. While it would be helpful for someone else to give Kalamazoo another loss, Kings Hammer just needs to handle its own business, and the rest will work itself out.