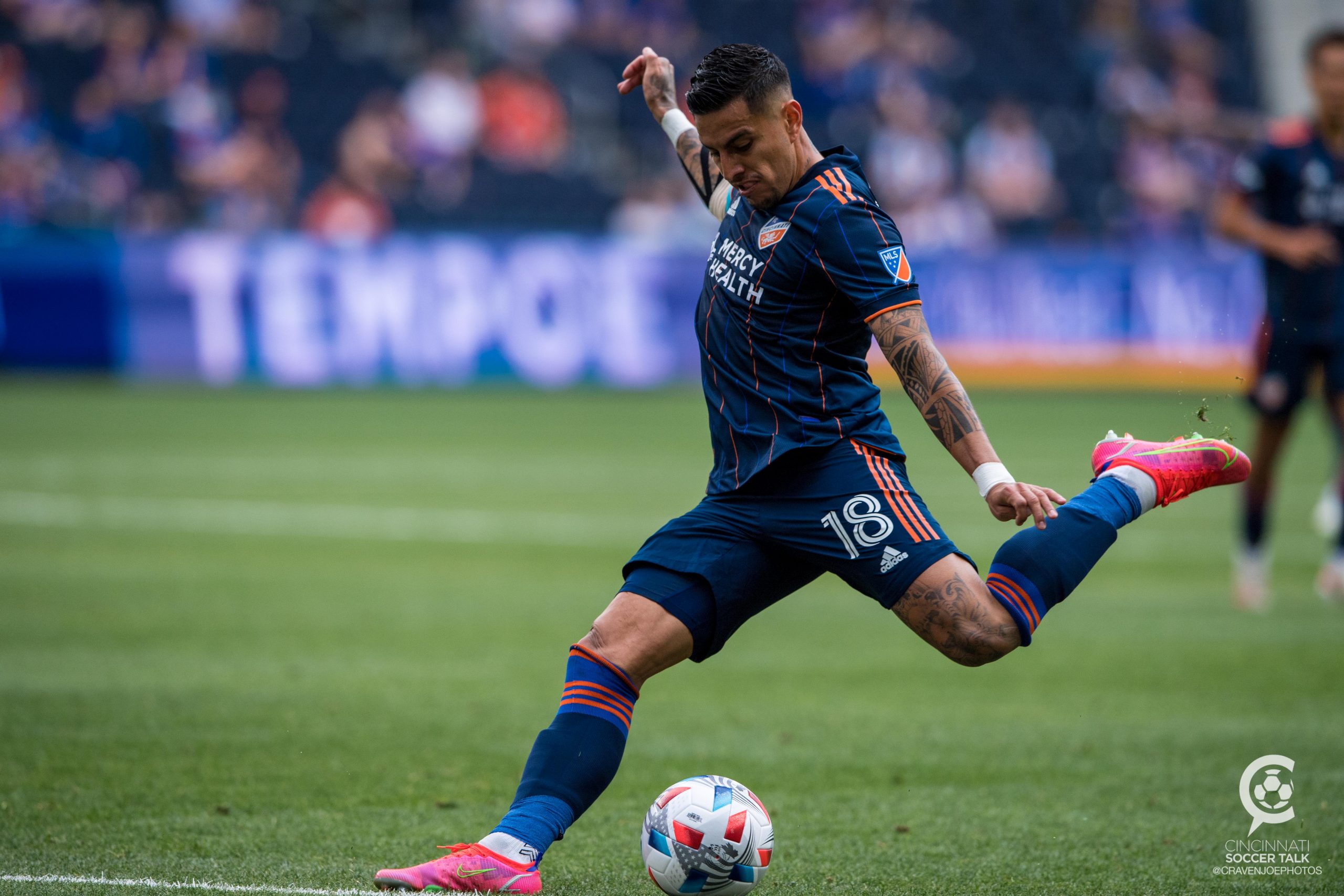 Ronald Matarrita came to FC Cincinnati with a decent price tag, but as Nate Gilman explains, his offensive production in assists is paying early dividends.

Rónald Matarrita arrived in Cincinnati via an offseason trade with New York City FC to take over as FCC’s left back. Matarrita’s salary, $753,083 in guaranteed compensation, puts him in the upper echelon of MLS defenders. In a league where balancing a roster against the salary is a primary concern, allocating so many resources to a full-back is not all that common. So what has Matarrita brought to Cincinnati so far?

Offensively, Matarrita has been a key cog in FC Cincinnati’s attack. Matarrita’s willingness and ability to get on the ball in all areas of the field gives FCC an outlet in possession. Matarrita excels in the buildout from the defensive third, progressing the ball by finding teammates further forward or carrying the ball himself. Further up the field, Matarrita provides dangerous opportunities for his teammates. Through five matches, Football Reference’s data credits Matarrita with 1.60 shot-creating actions per 90 minutes. FCC’s left-backs in 2020 provided similar shot-creating numbers, credited with 1.59 SCAs per 90. However, the quality of Matarrita’s delivery so far exceeds what FCC got last season. Matarrita contributes 0.39 expected assists (xA) per 90 minutes as opposed to the 0.06 xA from Greg Garza & Andrew Gutman in 2020.

Expected assists is a companion to expected goals. Expected goals determines the quality of a goal-scoring chance by comparing thousands of comparable shots to determine how likely one single shot is to be finished. Expected assists credit the player who passed the ball to the shooter in a similar way. Two of Matarrita’s assists so far this season give us two good examples to compare. The first assist came on his in-swinging free-kick against CF Montreal in which a diving Gustavo Vallecilla headed past Montreal goalkeeper Clémont Diop. The second assist came on Luciano Acosta’s goal against Nashville SC. Matarrita slipped the ball between multiple defenders, leaving Acosta one-on-one with the on-rushing keeper, whom he beats, chipping the ball into an empty net.

Both goals count as assists for Matarrita. However, Acosta’s was the much better chance, both according to the eye test and xA. According to MLS Soccer, similar attempts to Vallecilla’s goal were scored about 5% of the time (0.055 xG), while shots under similar circumstances to Acosta’s were goals 86% of the time (0.86 xG). Expected assists credit Matarrita with 0.055 xA for his pass to Vallecilla and 0.86 xA for his pass to Acosta. Matarrita’s 0.39 xA per 90 minutes this season show he has put teammates in dangerous positions with his passing. Matarrita’s three assists — the two mentioned above and the long-ball over the top to a sprinting Alvaro Barreal against Inter Miami CF — demonstrate his ability to unlock a defense from all areas of the field.

Matarrita has been valuable when he’s not providing the attacking end product, too. Matarrita ranks second on the team in touches in the middle third of the field and first in passes completed and passes attempted. Having another player comfortable on the ball to play forward or to recycle possession in the middle of the field has been a major help.

Matarrita’s defensive work has been more than serviceable as well. So far in 2021, he ranks among the team leaders in tackles and interceptions. The defensive side of the ball will never be the strongest part of Matarrita’s game, but his contributions so far have been more than enough, especially given the role he plays offensively.

Counterattacks will be something to keep an eye on going forward. Because Matarrita is an integral element of FCC’s attack, his side of the field will be vulnerable to the counter-attack. The match against Inter Miami CF provided a good example. Lewis Morgan, Miami’s right-winger, often stayed higher up the field out of possession, acting as the primary outlet for Miami’s counter-attacks. Coach Jaap Stam must figure out a way to compensate for Matarrita’s position up the field in transition. Playing Vallecilla, a more mobile central defender, as the left side center back could give Matarrita cover for these transitions. Another option would be asking a central midfielder to sit deeper to provide more balance in moments of transition.

Whatever Stam elects to do tactically, giving Matarrita the freedom to be involved in the attack will benefit FC Cincinnati. He has already demonstrated that he can provide something different for the team in the attack, and as he logs more minutes, especially with Acosta, the team should be able to create more dangerous chances.