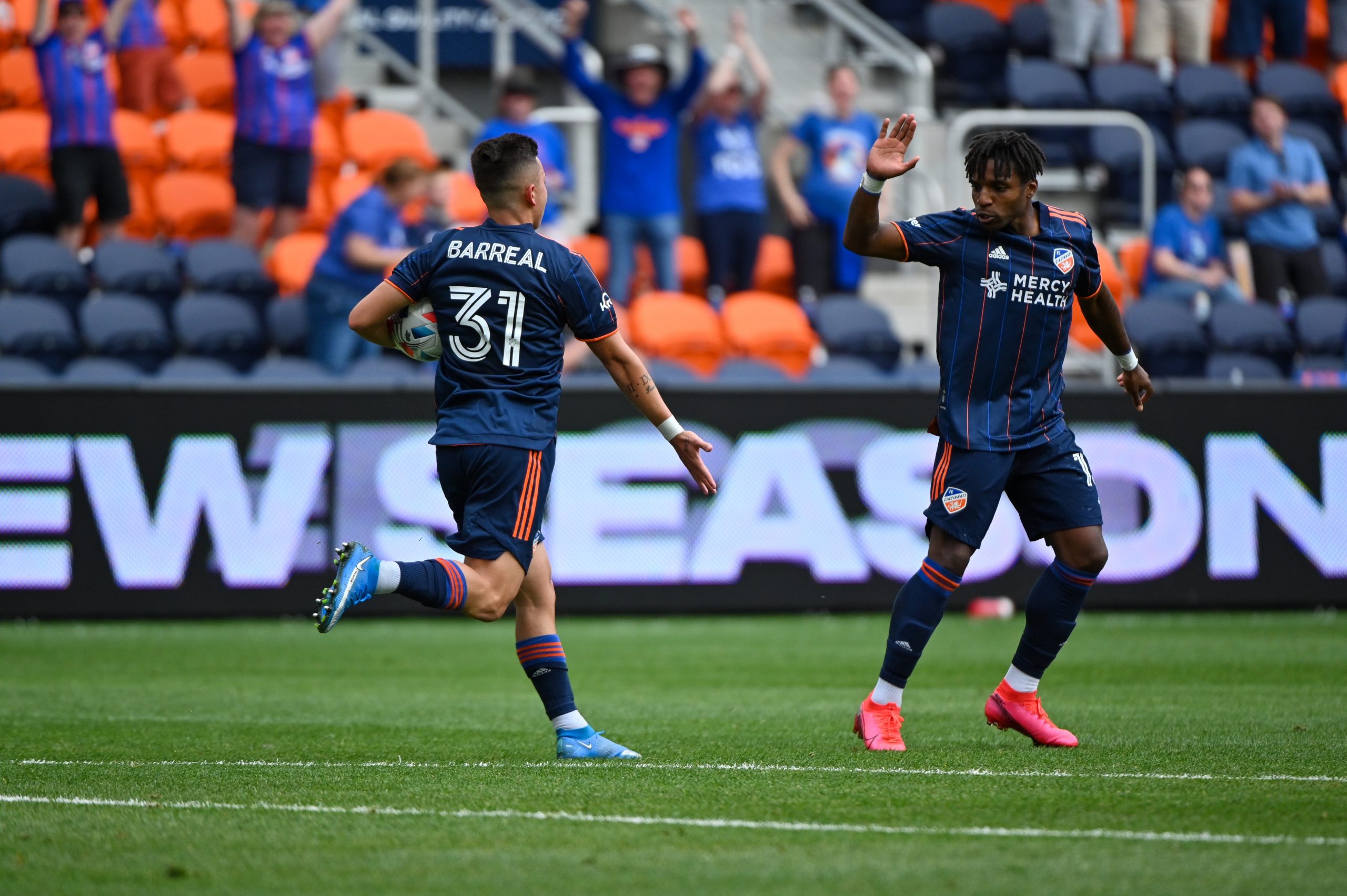 FC Cincinnati ended its winless drought to start the season with a 2-1 victory Saturday against CF Montreal. The match took place at DRV PNK Stadium in Fort Lauderdale, Florida, the temporary home of CF Montreal during the COVID-19 pandemic, in front of no fans. FC Cincinnati earned its first result after conceding the first goal of a match since its second-ever MLS match against Atlanta United on March 10, 2019. Djordje Mihailovic of Montreal opened the goal-scoring but was followed by a game-tying header from Jurgen Locadia and a game-winning header from Gustavo Vallecilla.

Throughout the first 10 minutes of the match, both sides held long periods of possession, however, neither Kenneth Vermeer nor Clement Diop was tested with a shot. The 3-5-2 formation from FCC did a nice job of pressuring CF Montreal in the offensive third, not allowing the forwards to generate a quality opportunity early on during the match.

The first opportunity for either team came in the 13th minute, as an errant pass from FC Cincinnati landed right to Romell Quioto inside of the box, but Geoff Cameron came to the rescue, making a great defensive play before Quioto got a shot off. Just over a minute later, Alvaro Barreal had a chance inside the box to score his second goal of the season but was also unable to get a shot off.

The first set-piece opportunity for FC Cincinnati came in the 16th minute through a free kick about 10 yards outside of the box. Luciano Acosta attempted to rocket the ball into the top right corner of the net but missed just high off the crossbar. In the 22nd minute, CF Montreal had its first free kick in the match, but the ball crossed into the box was harmless and cleared away by the Orange and Blue.

In the 24th minute, a turnover in the defensive third by Acosta led to the first shot on goal for Montreal. Erik Hurtado found himself on the right side of the box and put a weak, low shot on target, allowing Vermeer to dive to his right and make the save.

After the hydration break in the 26th minute, FC Cincinnati had found its best chance so far into the match. Barreal skillfully dribbled inside of the box and used his left foot to make a pass to Brenner near the penalty spot, but he could not put a meaningful shot on the net after he was swarmed by multiple Montreal defenders.

Near the conclusion of the first half, Montreal had a string of possession that led to multiple scoring opportunities. In the 39th minute, Montreal moved the ball through the box, ultimately leading to a header by Victor Wanyama that was saved by Vermeer.

With all the scoring opportunities in the first half, the final five minutes were crazy for both sides. In the 44th minute, Acosta put a strike on goal just outside the box, forcing Diop to make his first save of the match. After the initial save, Acosta attempted a through ball that bounced off a defender and Brenner, finding its way into the net. However, the line referee declared Brenner to be in an offside position. Less than 60 seconds later, Quioto was left alone right in front of an empty net but botched the shot.

In the third minute of stoppage time during the first half, Joseph-Claude Gyau rocketed a shot over the crossbar that marked the end of a scoreless but exciting first half. This first half marked the first time that FC Cincinnati had not allowed a goal in the first 45 minutes of the match during this season.

The first corner kick of the match occurred in the 51st minute, but FCC cleared the opportunity away and created its own opportunity on the counterattack. A nice buildup led to an opportunity for Gyau, but he missed high and far-right as he was trying to chip the Montreal keeper.

In the 56th minute, FC Cincinnati finally ran out of luck. A low pass by Quioto into the middle of the box provided Mihailovic with a simple tap-in for goal that he placed in the top right corner of the net. The goal scored by Mihailovic marked the fourth time in five matches played this season that FC Cincinnati conceded first.

Less than 10 minutes later, Montreal started to ramp up the attack with two opportunities that found the ball in the back of the net but did not count. First, in the 63rd minute, Mihailovic thought he had earned a brace, after putting the ball past a diving Vermeer, but he was ruled offside. Just two minutes later, Hurtado thought he scored the second goal of the match for Montreal, but he was also ruled offside.

Despite ample scoring opportunities by Montreal to open to the second half, FC Cincinnati found its chance to level the match. In the 69th minute, Jurgen Locadia ripped a shot that deflected off of a Montreal defender that led to a corner kick for FCC. On the ensuing corner kick taken by Acosta, the ball was crossed into the box, headed by Cameron to Locadia on the nearside of the post, who then headed the ball into the back of the net. Locadia’s goal in the 70th minute was his first goal during the 2021 MLS season.

FC Cincinnati built off the moment by creating another prime scoring opportunity less than five minutes later. Acosta played a beautiful through ball to Locadia, who then crossed it into Allan Cruz. Cruz was then taken down in the box by Diop. Although FCC thought Cruz had earned a penalty, VAR did not award one. FC Cincinnati maintained possession in the offensive third, and Cruz created a couple of additional scoring opportunities, but he did not convert.

After a lull in the action, it looked like both clubs might be willing to settle with a 1-1 draw, but in the 86th minute, FC Cincinnati had different plans. A free-kick put into the box by Ronald Matarrita found the head of a diving Gustavo Vallecilla, putting FC Cincinnati into the lead late in the match. The goal by Vallecilla was his first as a member of the Orange and Blue, and the second goal of the match scored by FCC off of a set-piece. It was also Matarrita’s third assist of the season.

Despite some last-ditch efforts from Montreal, FC Cincinnati walked away victorious for the first time this season. FC Cincinnati has won all three matches played against CF Montreal, improving its record against the Canadian side to 3-0-0.

Next up:
vs. New England Revolution, 3 p.m. Saturday, TQL Stadium